Armenia is a republic in the Caucasus, bordering Georgia in the north, Azerbaijan in the east, Iran in the south and Turkey in the west. Armenia also borders on the Azerbaijani excavator Nakhichevan in the southeast.

The area that is today Armenia has throughout history been subject to a number of other states, such as Persia, the Ottoman Empire and Russia. Only exceptionally, the area has been independent. The Armenians became early Christians, and the country is considered by many to be the first Christian state.

The Armenian word for Armenia is (Hayastan) Hayk, and the Armenian people are called hays. The name comes from the mythical Armenian patriarch Hayk, who is supposed to be a descendant of the biblical Noah. The oldest references to the name “Armenia” are Persian and Greek sources from around the year 500 BCE.

The national anthem is ” More Hayrenik ” (“Our Fatherland”). The lyrics were written by Mikael Nalbandian and the music was composed by Barsegh Kanachyan.

National Day is September 21, since Armenia became independent on this date in 1991. 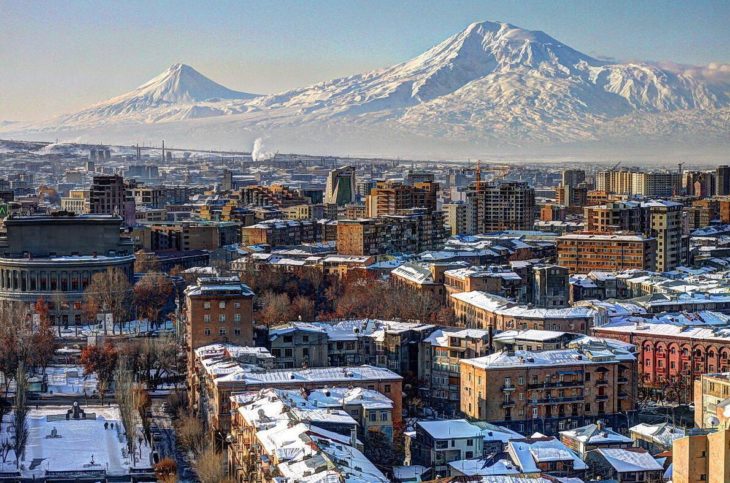 Armenia is located in the South Caucasus. Geographically, the country is located in Asia, but for historical and cultural reasons Armenia is often considered European. Armenia has no coastline.

Armenia is located on the Armenian Plateau, which, in addition to Armenia, includes parts of Turkey, Azerbaijan and Iran. Most of Armenia consists of mountains, and about half of the country is at over 2000 meters. The highest peak is Aragats, which extends 4095 meters above sea level. Mount Ararat has historically been part of Armenia, but it is now within Turkey’s borders. Ararat is 5137 meters high and is the national symbol of Armenia.

The climate is continental, which means hot summers and cold winters. In the Armenian Plateau, the average temperature ranges from 0 ° C to -15 ° C in winter, and from 15 ° C to 30 ° C in summer.

Parts of Armenia were heavily polluted by industrial emissions during the Soviet era. Many of the most polluting factories are now closed. Much of the arable land is polluted by the overuse of toxic pesticides. 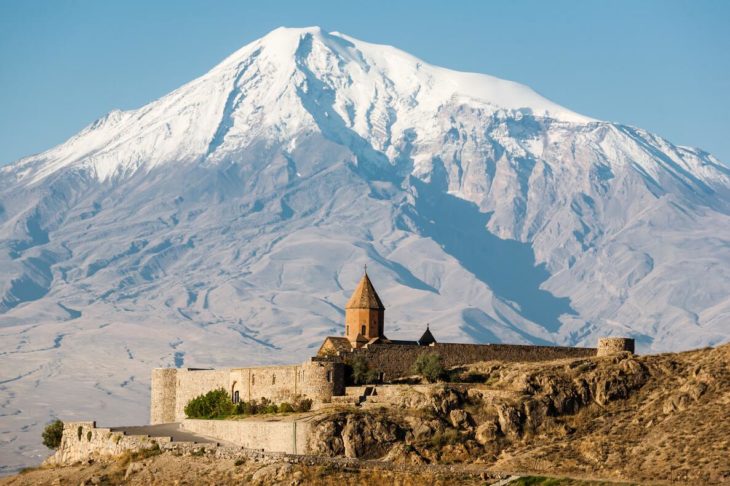 Christianity is the dominant religion, and 93 percent of the population belongs to the Armenian Apostolic Church. Otherwise, there are smaller groups of evangelical Christians and Jesuits.

63 percent of the population lives in cities. The largest city is the capital Yerevan, with one million inhabitants. Other major cities are Gyumri with 122,000 inhabitants and Vanadzor with 86,000 (2016).

Armenia is a republic with a semi-presidential regime. That is, the country has a middle ground between parliamentarism and presidential rule.

The president is elected by direct election for up to two five-year terms. In 2013, Serzh Sargsyan of the Armenian Republican Party was elected for his second term with 59 percent of the vote.

The president appoints a prime minister, who in turn forms a government. The Prime Minister must be approved by Parliament, which can also submit motions to the government.

Legislative power lies with the National Assembly (“Azgayin Zhoghov”). Parliament has a chamber of 131 representatives. These are chosen for periods of five years. 90 representatives are elected from individual constituencies and 41 are distributed proportionally from political parties according to the election results.

The courts have three levels. The judges are appointed by the Ministry of Justice and serve a lifetime. In addition, Armenia has a Constitutional Court, which can assess whether enacted laws are unconstitutional.

The Organization for Security and Cooperation in Europe (OSCE) has pointed out irregularities in several of the elections in Armenia. The courts are independent under the Constitution, but are often pressured by the authorities.

Armenia is a member of the UN and most of the UN’s special organizations, the World Bank, the Council of Europe and the OSCE. The country has been a member of the Commonwealth of Independent States since its founding, and it has a Partnership for Peace Agreement with NATO from 1994.

There have been people living in the area that is today Armenia for hundreds of thousands of years. The earliest traces of humans are 325,000 year old stone implements.

The geographical position between the Black Sea and the Caspian Sea, the North Caucasus and the Middle East, has led a large number of peoples to settle on the Armenian Plateau throughout history. Around the year 3400 BCE. the Kura-Araxes civilization arose in the area. This culture gradually spread to other parts of the Caucasus. Later, the area alternated between being independent and subject to others, such as the Persians, Alexander the Great and the Romans.

Armenia is often referred to as the world’s first Christian nation. The Armenians consider the founding of Khor Virap monastery in the year 301 as the starting point for the Christianization of Armenia.

At the beginning of the 16th century, Armenia was incorporated into the Ottoman Empire. In the following centuries the area was alternately controlled by Ottomans and Persians. Towards the end of the 19th century, Russia expanded south into the Caucasus, taking control of Armenia.

In 1915, what was called the Armenian Genocide started. Armenians in the Ottoman Empire, and eventually Turkey, were killed or massacred. Thousands of people were forced into a death march into the Syrian desert, where there was little hope of survival. Between 500,000 and 1.5 million people were killed. It is disputed whether the killings constitute a genocide.

According to the Peace of Sèvres, which was signed in the French city of Sèvres on August 10, 1920, Armenia was to be an independent state in 1920. Independence was short-lived. Turkey attacked in September of that year. In Armenia, the Bolsheviks seized power, inspired by the Russian Revolution. The Turks were defeated, but Armenia lost its independence and was incorporated into the Soviet Union.

From 1922 to 1936, Armenia was a member of the Transcaucasian Socialist Federative Soviet Republic. Later, the area gained the status of its own Soviet republic. In Soviet times, the Armenian industry was modernized and agriculture collectivized.

An arduous conflict between Armenians and Azerbaijanis in the autonomous region of Nagorno-Karabakh caught fire in 1988. The Armenians, who were majority in Nagorno-Karabakh, wanted the region to disengage from Azerbaijan and be incorporated into Armenia. The fighting that broke out shocked many in the Soviet Union, and showed that the Union began to crack.

Armenia declared itself an independent state on November 21, 1991. After the Soviet Union formally disbanded in December of that year, Armenia continued as a member of the Commonwealth of Independent States.

The conflict has meant that Armenia’s borders with Azerbaijan and Turkey have been closed since the war. Parts of Azerbaijan’s territory in the Nagorno-Karabakh region are under Armenian occupation. One can therefore travel from Armenia to Nagorno-Karabakh without crossing Azerbaijan-controlled territory.

Armenia is a middle-income country where agriculture, minerals and industry are the most important trade routes. GDP is $ 10.6 billion. Adjusted for purchasing power parity, GDP is $ 25.2 billion.

Industry is the largest economic sector with 30 per cent of GDP. Agriculture accounts for 20 percent of GDP and employs more than 40 percent of the workforce. Wheat, barley, figs, pomegranates, apricots, peaches and walnuts are among the most important agricultural commodities. Grape spirits are an important export commodity.

The most important minerals are copper, zinc, gold and lead. Minerals accounted for 40 percent of Armenia’s export revenues in 2009.

Transfers from Armenians abroad have become an important part of the economy. Money sent from Armenians working in Russia accounts for 20 percent of GDP.

During the Soviet era, a considerable industry was built up in Armenia. Chemicals, electronics and textiles were produced, among other things. When the Soviet Union disintegrated, Armenia’s economy also collapsed. Much of the industry was polluting and not very competitive in the international market.

An earthquake that hit the Soviet Republic in 1988 also had major economic consequences. 25,000 people were killed and 500,000 became homeless in the tragedy. Closed borders with Azerbaijan and Turkey also restricted Armenia’s trade with neighboring countries. Between 1989 and 1993, GDP fell by almost 60 per cent, but after that the economy began to grow strongly.

The financial crisis hit Armenia hard and slowed economic growth. In 2015, growth was three percent. The economy is also hampered by the fact that many industries are monopolies, and that a small group of oligarchs control most of the economy. According to former prime minister Hrant Bagratiyan, 44 families control 55 percent of Armenia’s GDP.

Corruption and nepotism are widespread. Armenia is number 95 out of 168 on Transparency International’s Corruption Perception Index (2015).

Armenia is a member of the World Trade Organization (WTO) and the Eurasian Economic Union (together with Russia, Belarus and Kazakhstan).

Armenia has eight years of compulsory schooling. The tuition is free. After elementary school, students can move on to a two-year high school. Following the disintegration of the Soviet Union, Armenia felt that the quality of primary school was declining, but the country has subsequently devoted considerable resources to improving the school system. 99.7 percent of the population can read and write.

Freedom of speech is a constitution in Armenia, but in practice the media is not free. The country is ranked 74 out of 180 countries on Reporters Without Borders Press Freedom Index (2016). The Freedom House organization ranks the media in Armenia as “Not Free”. The state news agency is called Armenpress. Armenia also has several private news agencies.

Television is the most important medium, and all the most watched TV channels are either governmental or have close ties to the government. Most private Armenian media struggle with the financing, and many rely on wealthy owners. The state TV channel is called Armenia 1. In addition, there are a number of private channels.

The Armenian literary tradition dates back to the invention of the Armenian alphabet around the year 400 AD. The earliest Armenian scriptures were translations of the Bible, in addition to classical Greek and Syriac texts. Later theological papers and works on the history of the Armenians followed.

Historically, the troubadour tradition stood strong in Armenia. Traveling skulls performed their own and historical works that were orally delivered. The most successful troubadours were also recognized outside Armenia.

Along with the development of the written literature, the Armenians developed their own forms of illustration. Many historical manuscripts are illustrated with colorful and very detailed drawings. Modern Armenian literature was developed in the 19th century by the authors Khachatur Abovyan and Mikael Nalbandian.

Armenia has a rich folk tradition. Song is often central, accompanied by various stringed instruments and percussion. The priest and composer Soghomon Soghomonian (1869-1935), better known as Komitas, made a legendary effort to gather Armenian folk music.

The local pop music has been named rabiz. Internationally, the most famous Armenian rock band is The Beautiful Project. The members of the American band System of a Down have Armenian background.