Azerbaijanhas been a democratic republic since 1991. The Constitution of 1995 adds the legislative power to a nationally elected National Assembly (Milli Majlis). It has 125 members who are elected in direct elections for five years; after 2002 all the mandates are elected in one-man circles. The executive lies with the president, who is elected in direct elections for five years. The voting age is 18 years. The state government is presidential. Politics is very unstable, and the widespread corruption makes it difficult for the country to control both politically and economically. In principle, Azerbaijan has a multi-party system, but the parties play a limited role. The dominant party since independence has been the presidential party, the new Azerbaijani party, which got 61 of the 125 seats in the 2005 election.

Administratively, Azerbaijan is divided into the Autonomous Republic of Nakhichevan (an exclave southwest of Armenia), the autonomous region of Nagorno-Karabakh (where the Armenian majority population seeks to create an independent state), 11 independent cities and 65 districts. 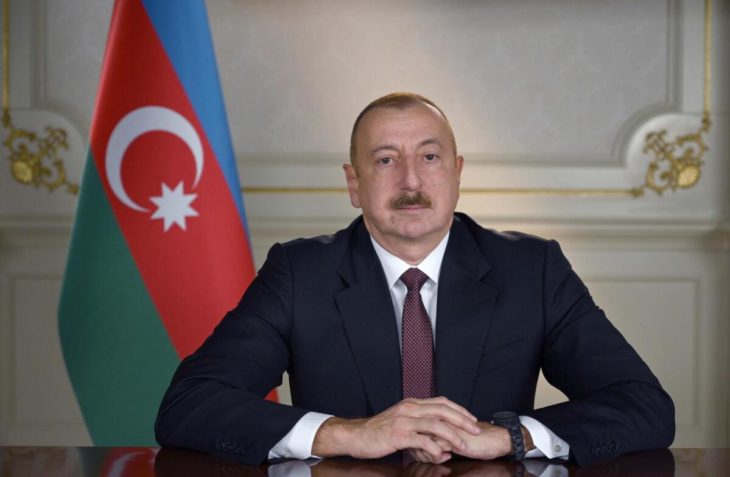 The judiciary is headed by a Supreme Court.

Azerbaijan has military service, with initial service of 18 months. The total strength of Azerbaijan’s armed forces is 66,950 active personnel, with a reserve of 300,000 personnel (2018, IISS). In addition there are about 15,000 semi-military, which includes the coastguard, border guards, and a militia with about 10,000 personnel.

The Air Force has a workforce of 7900 active personnel. Material comprising 16 fighters of a MiG-29, 19 attack aircraft of the type Su-25, two formation bomber of a Su-24, four transport aircraft, 12 trainers, 70 helicopters (including 26 combat helicopters of the type Mi-24), a heavy drone and 15 medium-heavy drones. In addition, the Air Force has long range air defense missiles.

The Navy has a workforce of 2200 active personnel. The fleet includes one corvette, 10 patrol vessels, four minesweepers, six landings, and one supply and auxiliary vessel.

In 2018, Azerbaijan participated in the NATO operation in Afghanistan ( Operation Resolute Support ) with 120 personnel.

The Nagorno-Karabakh Autonomous Area has an estimated personnel strength of 18-20,000, between 200 and 300 tanks, a small number of helicopters, and heavy artillery, short-range and conventional warheads, medium-range missiles and light air artillery.