Bahrain pursues a less active foreign policy in neighboring countries, but has a valuable strategic position, while at the same time, with its small population and limited financial resources, it is politically, economically and militarily vulnerable – and all the more dependent on allies. Bahrain’s foreign policy is therefore defined by contradictions between regional as well as global powers.

Bahrain is located in a geographical area of ​​great strategic importance – political, economic and military. At the Gulf of Persia, several great powers have interests that make cooperation with Bahrain valuable. It applies first and foremost to the country’s foremost regional allies, Saudi Arabia, then its geopolitical allies, especially the United States, then the United Kingdom.

Bahrain’s direct security significance has varied over time. Prior to independence in 1971, the country was a British protectorate, and the United Kingdom provided early control of the country to secure its trade route to India, as well as its interests in later Iraq. By independence, Bahrain chose to stand outside the new United States state formation, and turned to Saudi Arabia for cooperation – and eventually military protection – while Bahrain joined the Gulf Council and security policy cooperation there. 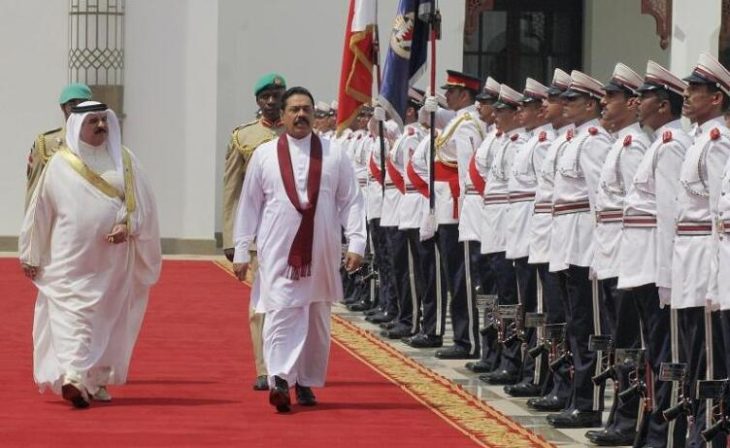 Western interests in the Gulf have long been linked to energy supply, and to secure supplies of oil, including secure supply lines. Not least this applied to the US, but in the 2000s, US energy security is less linked to the Middle East. Bahrain has also had no significant petroleum resources to support its political position. However, with announced new discoveries in 2018, this may change in a few years. By contrast, the Gulf region and Bahrain play a major strategic role in the United States’ relations with Iran and Iraq, and the conflict between the two countries in the late 1900s; then the situation in Iraq in the 2000s, and the persistent tense relationship with Iran after the revolution there in 1979.

Bahrain is physically located between one of the US and West’s most important allies in the Gulf, Saudi Arabia, and its foremost opponent, Iran. Bahrain is therefore a strategic platform for US influence in the region, while Saudi Arabia and the United States in particular fear the influence of Iran in Bahrain. The United States has therefore established a military presence in Bahrain, with its fifth fleet, to advance its interests. Great Britain also reopened a fleet base in the country, in 2016. Bahrain has largely supported US policy in the region. The country participated in the Gulf War in 1990 and participates, in a relatively modest degree, in the multinational fight against the Islamic State (IS) in Iraq and Syria, in Operation Inherent Resolve. Bahrain also participates in the Saudi-led, multinational intervention during the war in Yemen.

As a small state, Bahrain has an interest in regional stability, and therefore joined the Gulf and Gulf Cooperation Council (GCC) political and military cooperation, as one of its founders in 1981. Economic cooperation promoted increased integration between neighboring countries, further strengthened. of military cooperation. In 1984, a joint military force, the Peninsula Shield Force, was established. Bahrain participated in the Gulf War in 1990-91 within this framework, and military cooperation was strengthened after the war. The security policy value of this foreign policy, and the regional alliance, emerged during the Bahrain uprising in 2011. There were units from this GCC force that, at the request of the Bahrain government, were deployed to help fight the democracy uprising.

Bahrain also participates in the Arab League and other international forums, and emphasizes maintaining a good relationship with other parts of the Arab world. The government also highlights support for the Palestinian cause as important, without Bahrain having played any prominent role in the Middle East conflict.

Iraq’s invasion and annexation of Kuwait in 1990 highlighted the threat the small Gulf states feel from the region’s great powers, primarily Iraq and Iran. While Iraq promoted territorial claims against Kuwait, Iran has done the same to Bahrain.

The particularly close relationship with Kuwait and Saudi Arabia is also due to the fact that the three kingdoms have common roots in the same tribal areas of the Arabian Peninsula.

Saudi Arabia: Bahrain’s foreign policy is essentially about maintaining a close relationship with the regional power of Saudi Arabia, which the country is also economically dependent on: As Bahrain’s own oil reserves have been emptied, the country imports crude oil from Saudi Arabia for refining and export. Bahrain also has revenues from Saudi mining of deposits in the border area, which are jointly managed. Economic conditions were strengthened through the opening of a bridge link between Bahrain and Saudi Arabia in 1986. Relations with Saudi Arabia in particular, and neighboring countries through the GCC in general, are a key pillar of Bahrain’s security policy, which is defined in particular by relations with Iran.

Iran: Bahrain is paying close attention to developments in Iran, as this country has promoted historic territorial claims on Bahrain and has regional ambitions. The Shah renounced these demands in 1970, but they have been reiterated by the Islamist regime that took power in the Iranian revolution in 1979. This is one of the reasons the Bahraini authorities are following the situation in Iran. Another is the support Bahrain’s Shia activists and regime opponents can receive from Tehran to advance their demands. The fear in the Bahraini royal house is a Shiite revolt backed by Iran that wants to remove the monarchy and establish an Islamic republic in Bahrain. This is also a major reason for Saudi Arabia’s interest in Bahrains, and Bahrain’s reliance on security guarantees from Saudi Arabia and the United States. Bahrain partyed for Iraq in the first Gulf War, between Iran and Iran, 1980-88, but ended in opposition to Iraq during the second Gulf War and the liberation of Kuwait in 1991. Relations with Iran improved in the second half of the 1990s, after Iran was accused by the Bahrain authorities in 1996 of supporting a coup attempt; Iran should also have been behind a coup attempt in 1981, after Bahrain chose to support Iraq in the Gulf War. Ambassador-level relations were established in 1999, and the King of Bahrain visited Iran in August 2002; the first visit by a Bahraini head of state since the revolution in 1979. The situation worsened somewhat as a result of the Bahrain uprising in 2011.

Qatar: For several years, Bahrain has had a territorial disagreement with Qatar across several islands, primarily the Hawar archipelago. In 1986, there was a military confrontation when the Qatari military captured Fasht al-Dibal for a short period before the forces were withdrawn after mediation from Saudi Arabia. The Hawar conflict peaked in 1982, when Bahrain named one of its naval vessels Hawar; then in 1985–86 when the country began construction of a coastguard station on the reef of Fasht al-Dibal, whereupon Qatar sent forces to arrest the workers. In 1991, Qatar filed its claim against the Hawar Islands, Fasht al-Dibal and Qitat Jaradah before the International Court of Justice in The Hague, which issued a ruling in 2001. Bahrain was then granted sovereignty over the Hawar, Qater over the others; a ruling both countries accepted – after Bahrain in 1995 first rejected the court’s attempt to resolve the conflict. At the same time, a dispute over Zubarah on the mainland of Qatar, the former capital of the al-Khalifa dynasty, ended and the area was allotted Qatar. At the same time, the borders between the countries were clarified. Already in 1999, the emir of Qatar made an official visit to Bahrain, retaliated by emir Hamad the following year – as a basis for settling the territorial conflicts through the court in The Hague. Bahrain lagged behind the United Arab Emirates and Saudi Arabia as they imposed a blockade of Qatar in 2017, and relations with the country were broken.

USA: Since independence in 1971, Bahrain has had a close relationship with the United States, as its closest strategic ally next to Saudi Arabia; At the same time, the United States has close security policy cooperation with Saudi Arabia and other Gulf states. In 1971, Bahrain and the United States signed an agreement on US use of Britain’s former military facilities in the country; The United States had been using these since 1949 by hiring access from the United Kingdom. The agreement was formally wound up in 1977, but military cooperation continued. Following the war against Iraq in 1991, Bahrain signed a defense agreement with the United States that secured the country access to Bahraini ports, and agreed to joint military exercises. In 1995, the United States stationed fighter jets in Bahrain as a deterrent to Iran. Bahrain assisted the US attack on al-Qaeda and The Taliban in Afghanistan in 2001, among other things by making a frigate available for rescue missions in the Gulf. The relationship was strengthened as a result of the US attack on Iraq in 2003, even though Bahrain resisted the attack and did not participate in the operation. However, the United States used naval bases in Bahrain and has established headquarters for its fifth fleet there. Bahrain was also a starting point for the military operation against the Islamic State (IS) in Iraq and Syria in 2014 – Operation Inherent Resolve; Bahrain also participated in it. In 2004, Bahrain and the United States signed a free trade agreement. The United States criticized Bahrain’s authorities for dealing with the uprising in 2011, and again in 2012 for continued human rights violations.

Bahrain and the United Kingdom have a historically close relationship, and in recent times have joined forces with several key foreign policy issues. In 2014, an agreement was signed that gave Storbriannia the opportunity to establish a new military base in Bahrain, which was implemented in the form of a naval base in 2016.