Bahrain is a constitutional monarchy under the Constitution of 2002.

From independence in 1971, Bahrain was an Arab kingdom, with the emir as the formal and real head of state. The new emir of 1999, Sheikh Hamad bin Isa al-Khalifa, immediately initiated political reforms, and a new liberal constitution was adopted in a referendum in 2002. According to this, Bahrain is a constitutional monarchy, and the emir proclaimed king of Bahrain.

The king has extensive power, including by appointing the prime minister and the government, as well as the national assembly’s advisory body (upper house). He is also commander-in-chief of the defense, and leader of the Supreme Court.

The National Assembly (al-Jamiyh al-Watani) was dissolved in 1975, and restored in 2002. It consists of two chambers: The House of Representatives (Majlis an-Nuwab) has 40 elected members; a consultative council (Majlis ash-Shura) consists of 40 members appointed by the king.

The voting age is 20 years. In 2002, women were elected to the National Assembly for the first time, and political lists were allowed, although political parties were banned. Political groups have therefore organized themselves as associations, which are allowed.

Following the uprising in Bahrain in 2011, which was part of the Arab Spring, the opportunities for political opposition have been narrowed, and two of the most prominent opposition groups, al-Wefaq and al-Wa’ad, were banned in 2016–2017.

Bahrain is divided into 12 municipalities.

The judiciary is characterized by Islamic law ( Sharia ) and British common law. According to the new constitution, the courts are formally independent. 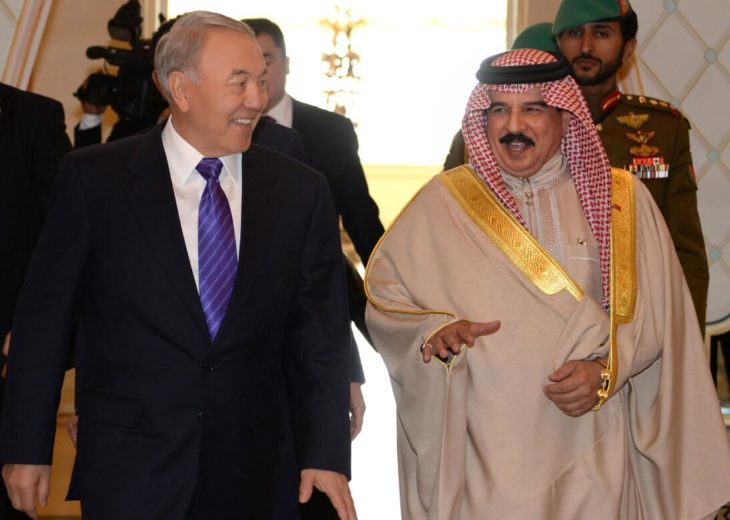 The army has a workforce of 6,000 active personnel. Heavier materials include 180 tanks of the type M60, 67 armored vehicles and 203 armored personnel.

The Air Force has a workforce of 1500 active personnel. The material includes 12 fighters of a F-5 Tiger II, 20 fighter aircraft of the type F-16, 11 transport aircraft, 9 trainer (which 6 Hawk can also be used as light combat aircraft), and 61 helicopters, 28 match helicopters of the Cobra.