A prominent feature of the classical Japanese dances is their symbolic character, where virtually every movement, foot or hand position has its significance. The dances can be divided into two groups, religious and secular. The movements can also be divided into two main groups: May, which is calm and solemn, preferably with the movement of the hands, related to the ancient Japanese religious dances; odori, cheerful and fast, rhythmic foot movements, originating from the folk dance tradition.

The oldest temple dances include kagura, which is based on ancient Shinto myths and rituals. In the 600s, the Buddhist-influenced gigaku came from China through Korea. The performers wore carved wooden masks that covered their entire head, and the dance, which is actually pantomime with masks, was accompanied by flute, hand drum and cymbal. Gigaku no longer exists in Japan, but the lion dance against evil forces is a popular heir to it. Gigaku was cultivated in the temples and at the court, but was soon supplanted by bugakudances. There are two types of bugaku. The original Japanese, which originated from the 600s to 1000s, are only danced on outdoor scenes by groups of 4–6 without masks and with Japanese costumes. For accompaniment, flutes and harps are used with 6 strings besides songs. The second type, introduced from abroad, is divided into two groups: the left dances originating in China and India, where the dancers are mostly dressed in red, and the right dances, which come from Korea and Manjury and with the dancers dressed in green tone. They are accompanied by wind and wind instruments without singing, and the dancers use imaginative animal and bird masks. The number of dancers can vary from one to six (in the old days up to 12), and they perform on an elevated stage that is approximately 7 × 7 m while the musicians sit in the background. 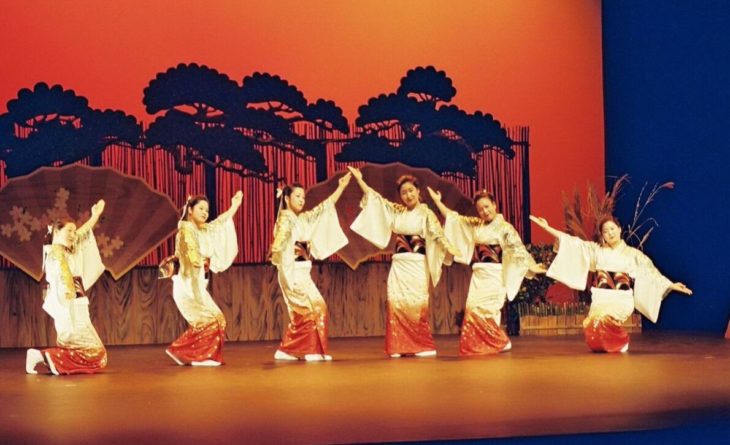 Dengaku are called various folk dances that originated in the 800s and 900s, originally in connection with rice planting and other important tasks or rituals in agriculture, and these peaked in the 12th and 1200s when they became popular in the cities.

Sangaku was originally Chinese acrobatic entertainment dances that were introduced as early as the 600s. After the court’s protection of this dance ceased in the 7th century, it was taken over by the public, who developed the variant sarugaku with comic mimicry and dialogue. This further led to the development of no and kyogen (cf. no ). From the 1100s to the 12th century the lively dance, Hayashiodori, became widespread. With other folk elements, such as rhythmic songs, it was incorporated into kabukitradition, which at first consisted of songs and dances, but later came to contain more dramatic elements. The Kabuki dances got their present form in the 19th century, and after male actors took over all the roles in the Kabuki game, the female professional dancers emerged outside the theater environment. Some of the geisha maintained this tradition. After the Second World War, the Geisha’s annual joint dance performance resumed in theaters. In the 1900s and later, women’s interest in learning dances of this type has increased, and performances are often arranged in both large and small cities. Various schools are working to preserve and renew this tradition.

Despite varying popularity, traditional Japanese dance forms have survived, although interest in classical ballet and Western dance forms has taken root in Japan as well. In many ways, in recent years there has been a kind of renaissance when it comes to, for example, kabuki and blend forms like butoh. Butoh places great emphasis on the emotional and aesthetic in a kind of expressionism, often in an almost ecstatic form with large differences between calm and movement. Music as well as silence are part of the dance, which often tries to push the body’s physical expressions to the limit. An expression that can often seem both brutal and grotesque, but which thus engages the audience.

Western classical ballet was introduced in Japan in the early 1900s with the Italian Giovanni V. Rosi, and many young ballet enthusiasts set out to study. Together with foreign teachers, they worked to make the new dance known. In the 1930s the movement reached a peak for the time being; central names were Ishii Baku and Takada Tasao. After World War II, it had its breakthrough with Tokyo’s first ballet school, Tokyo Ballet Gakko, founded by Koichi Hyashi in 1960. In 1964, Tadatsugu Sasaki reorganized the school and the school’s company, the Tokyo Ballet Company. The repertoire is a mix of well-known classical works and more modern ballets.

A special feature of Japanese ballet companies is their special emphasis on teaching, with schools of up to several thousand students. Skilled educators have also made Japanese classically trained dancers among the world’s best, and often among the soloists in the major international ballet ensembles both in the United States and Europe. Apart from the Tokyo Ballet, which was founded over 30 years ago, the Asami Maki Company, the Matsujama Ballet, the Tani Ensemble and the Homura Company can be mentioned. Among the leading ensembles with a modern dance style is the Star Dancers’ Company. Takarazuka’s pike opera and Nichigeki dancing team have also contributed to the development of modern ballet.

The most popular folk dance in today’s Japan is the traditional bon dance in various variations; it is erected at the memorial for the dead. There is a tower, richly illuminated with lanterns, and musicians with the samis (the Japanese guitar), drums and flutes playing folk songs from the top of the tower as people dance around the tower in ring.