Economy and Business in Armenia


The economic downturn and high unemployment have largely affected Armenia’s economy since independence in 1991. Nevertheless, there was some economic growth in the period 1995–2007, mainly due to an economic program funded by the International Monetary Fund (IMF). After 2001, there was a significant improvement in Armenia’s economy, and in the period 2001-2007, annual economic growth was around 10 per cent.

Agriculture and forestry contributed 20.5% of GDP in 2006 and just over 46.2% of the working population (2006). In recent years, agriculture has undergone extensive restructuring. privatization of agricultural land. Until Armenia’s independence, almost the entire agricultural area was subject to collective and state agriculture; By the mid-1990s, the privatization process was almost complete. The country’s most important agricultural areas are located in the Araks Valley and around Yerevan. Main agricultural products are potatoes and vegetables, cereals and fruits. Otherwise cotton, grapes and tobacco are also produced. On the high plains there are large grazing areas that provide a good basis for animal husbandry. Armenia has relatively little forest and forestry has no particular economic significance.

Armenia has valuable mineral deposits that are not exploited to any great extent. There is some extraction of copper, molybdenum, gold, silver, iron and nepheline (for aluminum production). Also deposits of salt, zinc, calcium oxide and carbon.

Armenia depends on importing energy. Russia and Turkmenistan are important suppliers of energy to Armenia. It is believed that the country has large reserves of oil and natural gas.

Nuclear power accounted for 33 per cent of the country’s electrical energy production in 2016. So did hydropower, while natural gas-based power plants contributed 35 per cent. The Metsamor nuclear power plant was reopened in 1995 as an attempt to resolve the country’s ongoing energy crises. The country is under international pressure to shut down Metsamor. In the event of a closure, the country’s energy situation could again become critical. Several of the rivers are water-rich and offer good hydropower potential. Sevan-Rasdan is the most important hydropower plant.

The industry employs approx. 16% of the country’s labor force (2007) and constitutes approx. 45% of GDP (2007). The industrial sector has been growing since 1995, but with some setbacks. The main industrial products are machinery, foodstuffs, textiles, metals, electrical power and chemical products. 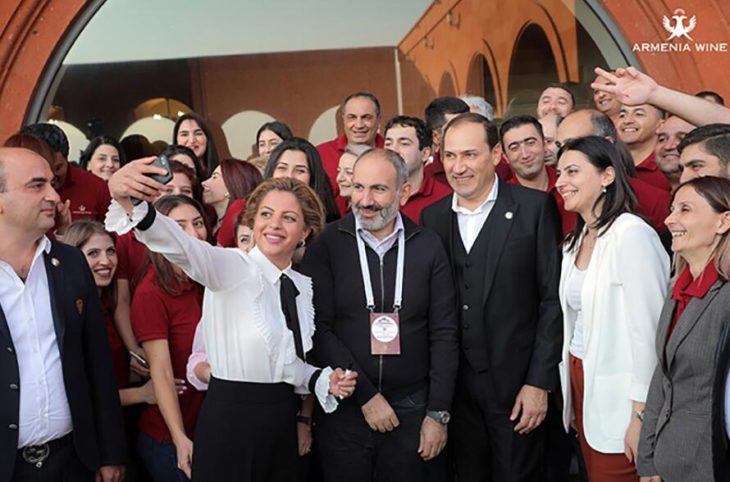 Armenia has a trade deficit with foreign countries, but from around 2000 the deficit has been somewhat reduced due to international investment, assistance and restructuring of the country’s economic structure.

Major export products are gold and jewelery, minerals, food and energy. The main import goods are energy and oil products, foodstuffs and diamonds. The majority of exports go to Germany, the Netherlands, Belgium, Russia and Israel, while imports mainly come from Belgium, the United States, Germany and Iran (2008).

The road and rail network is best developed in the west. There is a rail link to neighboring Georgia and Iran. Due to the political situation in the region, relations with Azerbaijan and Turkey are out of operation (2008). Within the country’s borders there is a railway network of approx. 710 km and approx. 15 900 km of roads (2007). About. 96% of the road network has a fixed tire, but almost half is still of a very low standard. The main international road link is the Kajaran Highway, which connects Armenia with Iran.