Economy and Business in Bangladesh


Bangladesh has enjoyed steady economic growth since the mid-1990s, despite political instability, weak infrastructure, corruption and slow implementation of economic reforms. Money transfers from Bangladeshi abroad and increased exports are important factors in this growth. Textiles account for about 80 percent of the country’s exports. However, the country still depends on assistance.

Nearly half of the population lives below the poverty line. Prosperity growth for the poorest is very slow, and Bangladesh is still among the world’s poorest countries.

Since 1977, a privatization policy has been implemented. International lenders, with the World Bank at the forefront, have pushed a liberalization of the economy with deregulation and privatization.

In order to attract foreign investment, the authorities have created so-called Export Processing Zones. Here the conditions are made for business establishments. Taxes and fees are minimal – and the government provides the necessary infrastructure. However, there has been much criticism of working conditions and the use of child labor in these zones.

In recent decades, Bangladesh has been increasingly hit by floods. The worst disaster in the country’s history occurred in 1970 when an estimated 300,000 people perished in a flood after a cyclone. In 1990, around 140,000 people died when a similar disaster struck the northeast coast and the islands of the Bay of Bengal. Repeatedly, more than half of the land area has been flooded during floods, which are believed to be linked to deforestation in neighboring Nepal and Bhutan. A social side effect has been that many small farmers have had to sell the land.

In recent years, clothing production has been important for the country’s economic growth. The clothing and textile industry grew in the 1980s, when low wages tempted foreign companies. Bangladesh has benefited from the so-called multifiber agreement, which has given the country both quota and duty free access to European and American markets. Exports of clothing (in 2017) account for more than 80 per cent of the country’s total exports. The sector is growing steadily, despite several major fatal accidents at clothing factories.

Foreign workers’ financial contributions to relatives in their home country are important for the country’s economy. There are about 7 million Bangladeshi living abroad. Most foreign workers work in the Gulf region.

More than half of the country’s inhabitants are employed in the agricultural sector. Farming conditions are skewed, and many farmers do not own their own land. The heavy floods of recent decades have intensified the bias in ownership, because small farmers have been forced to sell land after the crops have been destroyed. 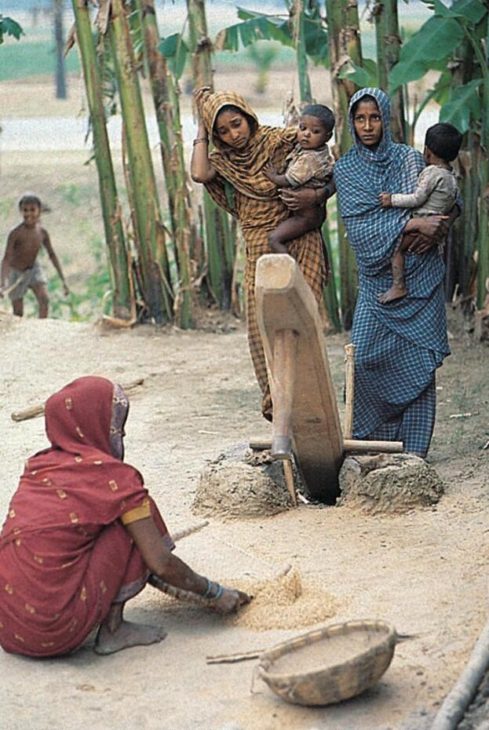 Agriculture with fishing is the dominant industry and employs around 47 per cent of the labor force (2016). The industry contributes 15 per cent of the gross domestic product. The most important products from agriculture and fishing are jute, rice, tea, shrimp and fish. 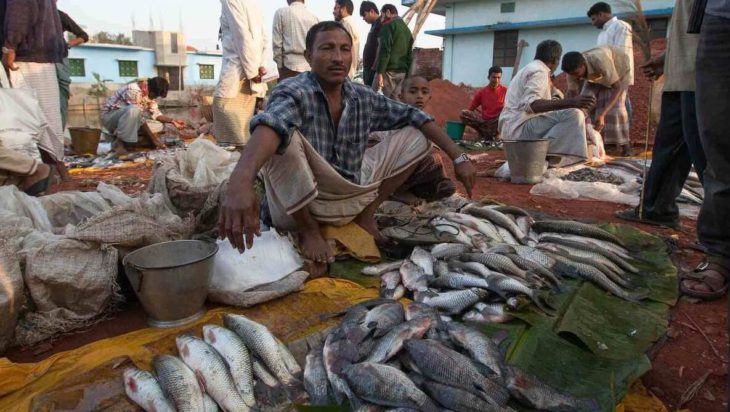 Around 70 per cent of the country’s area is cultivated, of which almost 80 per cent is used for growing rice. Despite the fact that the soil is very fertile, agriculture is unable to satisfy the nutritional needs of the population. The cultivation methods are primitive and the yield is low. Most of the arable land is already cultivated, and any increase in food production must therefore be done through improved technology.

Historically, Bengal is known for its jute production and raw jute, and jute products are still important export goods. Other important agricultural products are tea, sugar cane and wheat. Tea is grown in the northeastern hills near Sylhet, and jute cultivation is concentrated in the area around Mymensingh. Around Sylhet there is also the cultivation of oranges and pineapples. 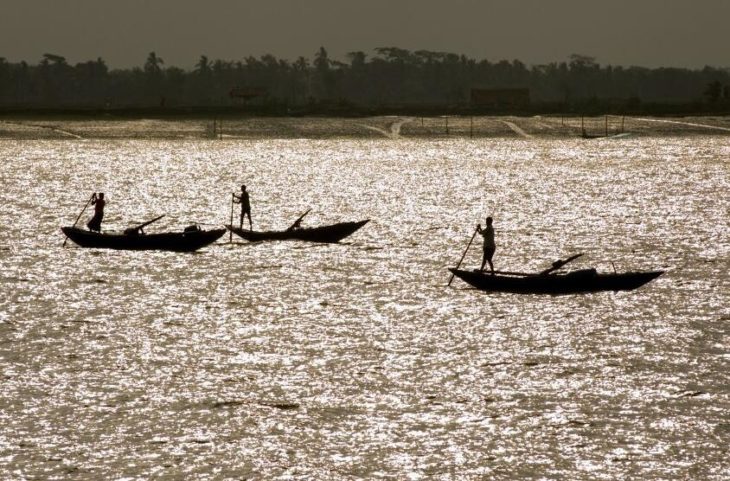 About 15 percent of the land area is forested, half Chittagong-tracts, and 1 / 4 in Sundarbans. The most important products are teak and bamboo, which mostly goes to local consumption. Bamboo is used in everything from fences and platforms to water pipes, but availability declines. Fishing also has problems due to overfishing. In addition, some aquaculture is run.

After the area around Dhaka, the easternmost part of the country with Sylhet and Chittagong is the most developed. There is a large paper mill in Chandraghona near Chittagong. Near the port city of Mongla and around Khulna, industry is built up with jute factory, matchmaking factory and the country’s only newsprint producer.

Electricity is the main source of power for most of the country’s economic activities. In Bangladesh, about 80 percent of the population lives in rural areas and less than half of these households have access to electricity. Several players are involved in developing renewable energy-based solutions to supply powerless regions with energy. The most important source of hydropower is the Kaptai Dam in the Chittagong Hill Tracts

The waterways are the country’s most important transport year. There are a total of about 8400 km of navigable rivers. The rivers are also, because of frequent floods, the foremost obstacle to developing a continuous road and rail network. The Bangabandhu Bridge over Jamuna, which opened in 1998, became the country’s first continuous road and rail link in the east-west direction. The railway network is around 2700 km and was mostly built while the British managed the country.

There are sea ports at Chittagong in the southeast and at Mongla in the southwest and inland ports at Dhaka, Chandpur, Barisal, Khulna and five other cities. The main international airport is at Dhaka (Zia), by the way, there are airports at all major cities.