The landscape of Armenia consists mainly of mountains and highlands of volcanic origin. Earthquakes often occur. In the north, the mountain range of the Little Caucasus extends through the Republic in the northwest-southeast direction, reaching altitudes of just over 3000 meters. To the south of this mountain range lies the Armenian high plateau, which consists of bare and wide plateaus reaching 2500 meters altitude. On the hillside lies Lake Sevan (1092 m asl), with an area of ​​1315 km2. It drains east to the Caspian Sea through the Araks River. Other important rivers are Rasdan and Debet. Over high plains rise several extinct volcanoes, the highest being Aragats with 4090 meters above sea level. The Araks Valley at a height of 900 meters is the lowest part of Armenia.

Distinct continental climate with hot summers and cold winters and large temperature fluctuations between day and night. In the lower parts of Yerevan, the average temperature in January is -3 °C and 25 °C in August. Annual rainfall at the same site is 320 mm. The heat decreases with height; the rainfall increases.

Plant and Wildlife in Armenia

There are steppes in the interior of the country, while forests occur in areas with more humid climates. 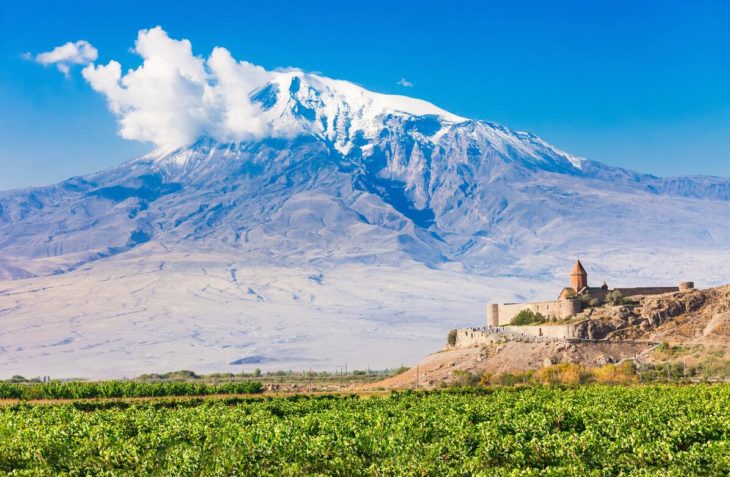 The fauna has great similarities to that found in northeastern Turkey. Of predators include brown bears, red foxes, golden jackals and some martyrs. It is possible that some leopards are still in remote areas. Deer and wild boar are the largest herbivores. Kites, vultures, chickens and larches are common. Many ducklings nest or act as migratory or winter guests.