The main island of Bahrain is 48 km long and 18 km wide, and is made up of limestone, sandstone and marble from chalk and tertiary. The highest point is Jabal Dukhan, 135 meters above sea level. Sand letters and marshland in the south and southwest. Surrounded by coral reefs.

The climate in Bahrain is warm and dry with an annual rainfall of just under 100 mm. The rainfall comes in winter and spring. Despite the sparse rainfall, Bahrain has large (but decreasing) groundwater reservoirs.

The average temperature is 17 °C in January, 34 °C in August. The warmest months are August and September as the temperature can rise to 40 °C.

Bahrain consists of 33 mainly small islands in the Gulf of Persia, divided into two archipelagos, and is located off the Arabian Peninsula. The largest and most important of the islands is Bahrain, with the capital Manama. Three other larger islands have bridges to this: al-Muharraq, Sitrah and Umm al-Nasan. The second archipelago, Hawar, has been the subject of territorial conflict between Bahrain and Qatar, but Bahrain has been granted control. 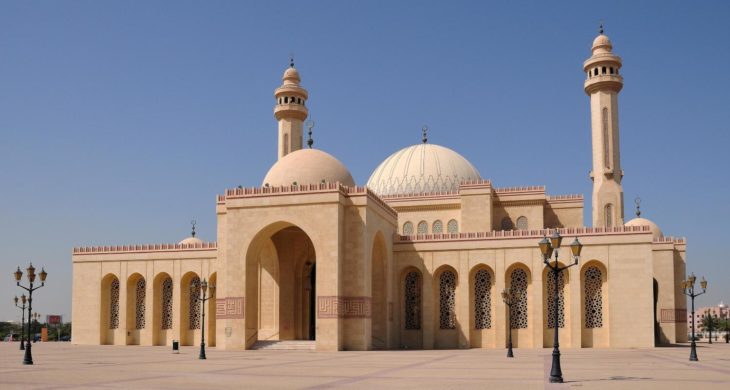 Bahrain Island is 48 kilometers long and 18 kilometers wide, and since 1986 has been linked to Saudi Arabia through the 24-kilometer King Fahd Bridge over the Gulf of Bahrain. The main island consists of sand letters and marshland in the south and southwest, of cultivated areas on the north and northwest coast, and is surrounded by coral reefs. The highest point is Jabal Dukhan, 135 meters above sea level.

The climate is warm and dry, with an annual rainfall of just under 100 millimeters, and with high humidity in the summer season, due to evaporation from the Gulf. The temperature can reach 50 ° C. The once-significant freshwater reserves are by far exhausted, and most of the freshwater is desalinated from the sea.

Wildlife is limited, but there are gazelles and hares, among others. About 200 different desert plants grow in Bahrain, which also has a maritime life and a smaller number of birds. The country is subject to further desertification, as well as damage to the coastline, including the coral reefs, due in part to oil spills.