Armenia has a long history that goes far back in time. The country was a battleground for both the Assyrians, the Medes and the Persians and was alternately an independent kingdom and land under the surrounding kingdoms. After the Persians, Alexander was the great, selevkid and Roman lords over the land.

At the beginning of the 16th century, Armenia was incorporated into the Ottoman Empire. In the following centuries the area was alternately controlled by Ottomans and Persians. Towards the end of the 19th century, Russia expanded south into the Caucasus, taking control of Armenia. In 1915, what was called the Armenian Genocide started. Armenians living in the Ottoman Empire ( Turkey) were killed or massacred between 1915 and 1920. Between 500,000 and 1.5 million people were killed.

Armenia became an independent state in 1920, but independence was short-lived. Turkey attacked in September of that year. In Armenia, the Bolsheviks seized power, inspired by the Russian Revolution. The Turks were defeated, but Armenia lost its independence and was incorporated into the Soviet Union. In Soviet times, the Armenian industry was modernized and agriculture collectivized.

An arduous conflict between Armenians and Azerbaijanis in the autonomous region of Nagorno-Karabakh caught fire in 1988. The Armenians, who were majority in Nagorno-Karabakh, wanted the region to disengage from Azerbaijan and be incorporated into Armenia. The fighting that broke out shocked many in the Soviet Union, and showed that the Union began to crack.

Armenia declared itself an independent state on November 21, 1991. After the Soviet Union formally disbanded in December of that year, Armenia continued as a member of the Commonwealth of Independent States. 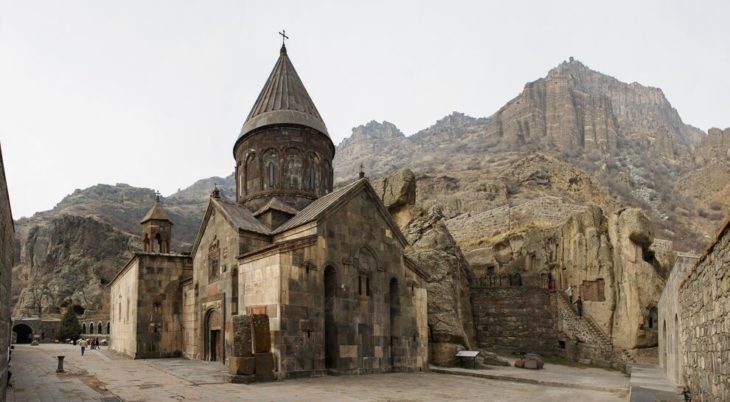 There is a lot of early Christian architecture in Armenia. The Geghard Monastery in the province of Kotayk is on the UNESCO World Heritage List.

There have been people living in the area that is today Armenia for hundreds of thousands of years. The earliest traces of humans are 325,000 year old stone implements.

The geographical position between the Black Sea and the Caspian Sea, the North Caucasus and the Middle East, has led a large number of peoples to settle on the Armenian Plateau throughout history. Around the year 3400 BCE. the Kura-Araxes civilization arose in the area. This culture gradually spread to other parts of the Caucasus. Later the area alternated between being independent and subject to others, such as the Persians, Alexander the Great and the Romans.

Christianity came early to Armenia, which became the first Christian state in history. The founding of Khor Virap monastery in 301 AD was the starting point for the country’s 1700th anniversary as a Christian nation in 2001.

In the twentieth century, Armenia came to Persia, and after the Romans and Persians divided the country between them in the year 384, a large number of people from the Byzantines to the Arabs demanded it. Lineage Bagratids put on Armenia throne from 885 to King Kahig 2 were killed in 1079. A number of Armenian emigrated then to the south coast of Asia Minor, where kingdom Lesser Armenia lasted until it was captured by Turks in 1371. 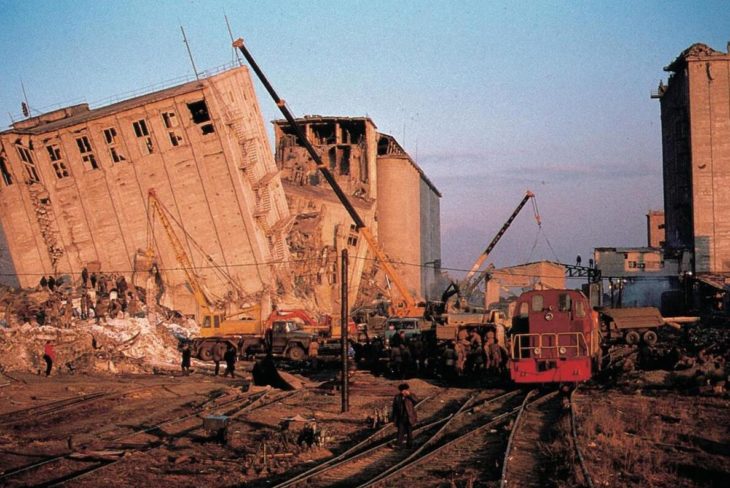 On December 7, 1988, the northern part of Armenia was hit by a severe earthquake. About. 35,000 were killed and approx. 13,000 injured. The picture shows cleanup and rescue work in the then Leninakan, now Gjumri.

From the 16th century, the Ottoman Empire (Turkey) ruled Armenia, but the eastern part of the area was still a source of conflict between Turkey and Persia, and it was from the latter country that the Russians conquered the area corresponding to the present state of Armenia. At the Berlin Congress in 1878, the Russians also gained the districts of Kars, Ardahan and Batum, but the first two were returned to Turkey in 1921.

Between 1894 and 1915, the Armenian people underwent one of the worst tribulation times in their history. The Turks systematically resorted to their oppression, massacring hundreds of thousands in the Armenian genocide. The Armenians in Van revolted and managed until Turkish troops were deployed against them.

The Brest-Litovsk Peace of 1918, one of the post- World War I peace treaties, made Russian Armenia an independent republic under German oversight. By the Treaty of Sevres in 1920, the Armenian kingdom, which then included parts of present-day Turkey, was guaranteed independence under the protection of the League of Nations.

In September 1920, Turkey again attacked Armenia. They were met by Russian communists who took control of Armenia, and in December proclaimed it as a Soviet republic. The Soviet-Turkish Peace Agreement in 1921 set the borders between Turkey and Soviet Armenia, thus ending the short-term independence of the Armenians. Fridtjof Nansen’s plan for the League of Nations (1925) for a self-governed joint Armenian area in Yerevan did not materialize.

From 1922 to 1936, Armenia was a member of the Transcaucasian Socialist Federative Soviet Republic, after which the area had its own Union Republic status. As a Soviet Republic, Armenia took part in a general development of infrastructure, modernization of the industry and improvement of the education system. On the other hand, the forced collectivization of agriculture led to the deportation of thousands of peasants in the years after 1930. Stalin’s ravages during the great terror of the late 1930s also affected the people of Armenia in line with other Soviet citizens.

During World War II, Armenia was not occupied. The Armenians thus constituted an important labor reserve and also participated with half a million soldiers in the Soviet army. After 1945, investments were made in Armenian industry, and a large number of ethnic Armenians moved to the Republic from other areas of the Soviet Union.

Mikhail Gorbachev took over as party leader in Moscow in 1985. One of the results of his glasnost policy was that national conflicts in various parts of the Soviet Union flared up again. From 1988, this also applied to Armenia’s conflict with neighboring Azerbaijan over the Nagorno-Karabakh area. Nagorno-Karabakh was an autonomous area of ​​Azerbaijan; three quarters of the population are Armenians. The conflict started as a riot among the Armenians in Nagorno-Karabakh demanding liberation from Azerbaijan and joining Armenia.

On December 7, 1988, Armenia was hit by an earthquake that destroyed the city of Spitak, and destroyed much of the republic’s second largest and third largest city, Leninakan (present-day Gumri) and Kirovakan (present-day Vanadzor). About 25,000 people were killed and over half a million became homeless.

After the election of the republic’s Supreme Soviet in May 1990, the communists came in a minority. When the Assembly met in August, Nationalist leader Levon Ter-Petrosjan was elected president. At the same time, Armenia was declared sovereign. Armenia’s nationalist line was followed by the boycott of the referendum on the new union agreement on March 17, 1991.

President Ter-Petrosjan nevertheless participated in parts of the negotiations for a new union agreement. Shortly after the failed coup d’état in the Soviet Union, the Armenian Communist Party dissolved itself, and on September 21, the country held a referendum on independence. 95 per cent took part in the elections, giving 94 per cent majority for independence. The Republic declared itself independent on September 23, 1991, and at the same time declared that the State did not accept the five-year transitional period which the Soviet Union had set for leaving the Union. By direct election in October, Levon Ter-Petrosjan was re-elected president.

When the Soviet Union finally disbanded in December of that year, Armenia became a member of the new Commonwealth of Independent States.