Japan has a rich literary history that goes back to the 7th century. Until the modernization of Japanese society in the late 1800s, history is usually divided into periods named after the changing capitals: Nara period, Heian period, Kamakura period, Muromachi and Azuchi – Momoyama period and Edo period. 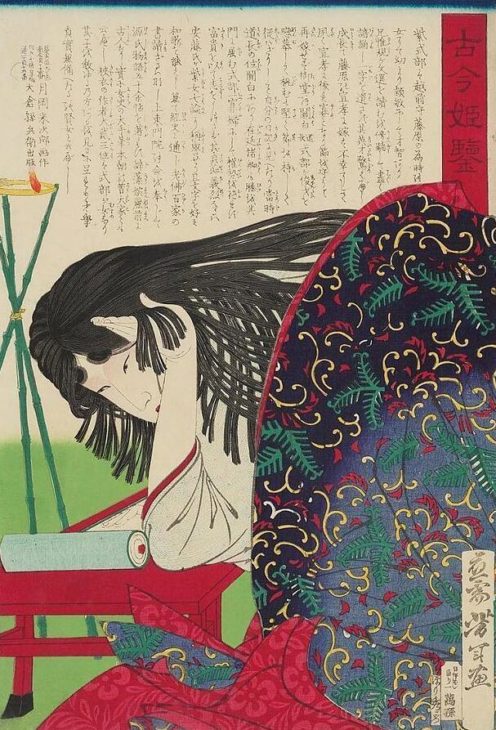 A prerequisite for Japanese literature was the introduction of the Chinese written language to the Japanese islands. Although fragments of letters, legal texts and others have survived from the centuries before the Nara period, the chronicles Kojiki (Report of Ancient Incidents, 712 AD) and Nihongi or Nihon shoki (Japan’s Annals, 720) are considered the starting point for Japan’s literary history. Both are written in Chinese with strong Japanese features. They begin with cosmogonic accounts of the rise of the gods and continue with stories of their conflicts and landowns, and then the achievements of the imperial clan through the ages.

Shinto prayer writings, Norito, were first recorded in the 9th century, but reproduce older forms of language. The Kaifuso collection (751) consists of 120 Chinese poems written by the Japanese court. Fudoki are topographic and cultural-geographical descriptions of different provinces, five of which have been handed down.

The first preserved work in Japanese is the poetry collection Man’yōshū (The Collection of Ten Thousand Leaves) from the mid-700s. It is written with Chinese characters that are used soon semantically, soon phonetically, in a complicated system called man’yōgana, and which was to develop into today’s two syllable hiragana and katakana. Man’yōshū contains approx. 4,500 poems by highly different contributors such as the poems Akahito, Okura and Yakamochi. Subject choices and style and the length of the poems vary, but they represent a form-fitting and exquisite poetry. Chōka (‘long poem’) and tanka (‘short poem’, also called waka), “Japanese poem”) are the two main types of the collection. Tanka, which is without rhyme and consists of 31 syllables in 5 lines (5 + 7 + 5 + 7 + 7), came to dominate the lyric tradition in Japan.

At the beginning of this period, the syllables of hiragana and katakana are developed based on man’yōgana. These writing systems were far better suited to writing Japanese, and a rich national literature began to flourish in the court environment in Kyoto. The poem collection Kokin wakashu (Collection of old and new poems, 905) was edited by the poet Ki no Tsurayuki by order of the emperor and contains 1100 tanks.

Of the national prose literature from this period must be mentioned genres such as monogatari (stories), nikki (diaries), zuihitsu ( essays ) and kagami (‘mirror’ literature). The earliest monogatari literature belongs to Taketori monogatari (The Story of the Bamboo Anchor), which is based on a folk tale, and Ise monogatari (Story from Ise), which is a collection of anecdotes related to individual poems. Around 1010, the court lady Murasaki Shikibu (978-1016) wrote Genji monogatari (The Story of Prince Genji), which describes Prince Genji’s life and erotic conquests at the court, and provides a lavish picture of the aesthetic taste and religious worldview of the time among the aristocrats.

It was mainly the women who worked on the simple kana characters, which were also called “women’s writing”, while the men most often wrote in Chinese. An exception is Tosa nikki (930s) by Tsurayuki, who is considered very well-written Kanan literature.

Among the essay literature from this period, Makura no sōshi (Pillow Book, from about 1000) of court lady Sei Shōnagon ranks high. It contains reflections on the customs and customs of the time, and aesthetics and is written in a slightly ironic, elegant style. Other well-known diaries are Kagerō nikki (974), Izumi Shikibu nikki (1004), Murasaki Shikibu nikki (ca. 1010), who personally shed light on the women’s situation as they experienced it.

Interesting is the historically oriented Kagami literature; Agkagami (The Great Mirror, 1080s) is written in the form of a series of frame narratives with dialogues and comments on events from about 850 to 1025. Ōkagami also became the pattern for several later works in this genre, such as Masukagami (The Clear Mirror, 1376 ). Priest Genshin’s work Ōjō yōshu (The Essential for Salvation, 985) is visionary literature that describes in detail the glory of paradise and the torments of hell, and which came to mean a great deal to the emergence of the sect Jōdoshū (the pure land sect). Ryōjin hishō (Songs That Make Dust Dance on the Beams, 1169) is a popular folk-poetry collection with Buddhist undertones.

While the literature of the Heian period largely addressed the elegant life of the court, the upheavals of the Kamakura era led to major changes in the tone and theme of literature. Not least, this is the era of the great epics, represented by works such as Hōgen monogatari and Heiji monogatari, Genpei sesuiki and Heike monogatari (from the mid-13th century). Especially Heike Monogatari is a giant landscaped epics, full of drama in the description of the new samurai class’s pursuit of the pinnacle of power and their bloody battles. Under the surface, however, one can also see the Buddhist recognition of the volatility and perishability of human life. The style is also new, characterized by several Chinese foreign words and word groups of 5 and 7 syllables, which give a rhythmic power to recitations.

Priest Kamo no Chōmei (1153–1216) wrote the essay collection Hōjōki (Diary from a Cabin, c. 1200), and the priest Yoshida Kenkō (1283–1350) wrote Tsurezure gusa (Thoughts in Vacancy, c. 1331), but their essays reflect in form and content, the crisis of the new age. Tanka collections from this period are numerous, but Shin kokinshu (The new kokinshu, 1205) stands with its refined form of expression as the most representative.

During this period, a new form of poetry came to be known as purity (chain poetry). Several poets came together and composed half the tank- verse in turn, resulting in an infinite series of tank-poems with each new half. The collections Tsukubashū (1356) and Minase sangin hyakugin (One Hundred Poems of Three Poets by Minase, 1488) show the popular and humorous poetic play that purge evolved.

After the Emperor’s split into two rival camps, a period of great turmoil followed, and in response to the situation, Kitabatake Chikafusa (1292-1354) authored the royalist, ideological treatise Jinnō shōtōki ( The Divine Emperor’s True Genealogy, 1339) the basis of imperial ideology. Elsewhere, Zen Buddhism studied at various temples in Kamakura and Kyoto, and it came to exercising great influence within the new art forms that emerged, primarily NO -teateret. Ō Master Zeami Motokiyos (1363–1443) Kadensho(The Book on the Transmission of Flowers) is a profoundly dramaturgical thesis that illuminates several aspects of this performing arts. Otogi zōshi is a collection of folk tales from this era that contains several stories that are still held by Japanese children.

During the Azuchi-Momoyama period, Japanese society was divided into classes, and this class division also characterized the Edo period. It was the trade patrician and other citizens in the growing cities that eventually became the cultural-creating class. The period from the end of the 17th century to the beginning of the 17th century is called the Genroku period in Japan’s cultural history. Here, the citizens’ favorite theater experienced kabuki and bunrakuits first flowering time. Chikamatsu Monzaemon (1653-1724) dramatized, among other things, fresh news and showed sharp analysis of the fateful conflict between society’s norms and the individual’s freedom to strive in the stratified stratified society. Within the popular prose literature, it was Ihara Saikaku (1642–1693) who reached the highest in describing the life-giving lives of the citizens and depicting life in the Yoshiwara amusement district in Edo.

Matsuo Bashō (1644–1694) descended from the warrior class, but chose to live as a citizen. Bashō radically renewed the thought and purge tradition and laid the foundation for haiku poetry. Another highlight was the citizens of Edo (Tokyo) from the latter half of the 18th century onwards, especially in the prose literature. Here, partially vulgar, comic books with rich illustrations emerged, and these became known as “yellow” and “red” books by the color of the covers. A comic serial, Tōkaidō Hizakurige (On the Apostles’ Horses along the Tōkaidō Road), was published by Jippensha Ikku (1765-1831) for a period of over 20 years. Ueda Akinari (1734-1809) is known as the author of the mysterious Ugetsu monogatari (The Story of Rain and Moon), and Takizawa Bakin (1767-1848) for his imaginative historical novelSatomi Hakkenden (The story of the eight dogs from Satomi).

Within the haiku tradition, the painter Yosa no Buson (1716-1783), who renewed the tradition of Bashō with coloristic freshness alongside Kobayashi Issa (1763-1824), cultivated a personal style. Towards the end of the Edo period, it became common to express the dissatisfaction of the citizens with anonymous poems written on walls during the night. The poems had exactly the same form as haiku, but here it was about to hit the authorities, and this biting sarcastic poem form was called senryū.

The Meiji restoration in 1868 meant a tremendous enrichment to Japanese literature, but also brought with it major upheavals and a profound reorientation as technological, political and socioeconomic changes occurred. As part of the enlightenment business on the West, European writers such as Jules Verne, Alexandre Dumas and William Shakespeare were translated into Japanese. They were influenced by several currents from the West at one and the same time.

Shōyō Tsubouchi (1859–1935) reacted to the Confucian view of literature and, through the essence of the novel (1885), sought to define the form and function of literature by introducing the Western concept of realism. At the time, Japanese poetry was written in a heavily codified literary style, with a large body of Chinese characters, and was distant from everyday language. To put Tsubouchi’s theory into practice, Japanese writers first had to develop a written language that was closer to the way people actually communicated with each other. The movement that advocated a development to bring the written language closer to the spoken language is known as genbun’itchi (‘correspondence between the speech and written language’). Tsubouchi’s student, Shimei Futabatei(1864-1909), which was also influenced by Ivan Turgeniev and Fjodor Dostoevsky, wrote the novel Ukigumo (Drifting Clouds, 1881), which is considered to be one of the very first novels in the new everyday style.

However, as a protest against the rapid Westernization, Kōyō Ozaki (1867-1903) and his followers sought to restore the traditional Japanese writing style and reconcile it with realism. Several other writers, such as Rohan Kōda (1867-1947), continued to write in traditional style. Ichiyō Higuchi (1872–1896), considered Japan’s first female author of modern times, also continued the traditional style, inspired by the waka poetry, but was a thematic modern writer who looked at women’s and children’s situations. Against realism also stood the German-oriented aigai Mori(1862-1922), which advocated romantic aestheticism. Authors such as Kyōka Izumi (1873-1939), Roka Tokutomi (1868-1927) and others advocated a more realistic and critical depiction of society.

Within the haiku tradition, Shiki Masaoka (1867-1902) broke with the fixed formalism the haiku poetry had fallen into, demanding realism and objectivism in the haiku poem. Shiki started the journal Hototogisu (Cuckoo) and promoted the vibrant realistic shaseibun style (sketch style). Other prominent members of the Hototogisu circle were Sōseki Natsume and the poet Kyoshi Takahama (1874–1959), who left deep traces in the modernist haiku.

Within the tanking tradition, the married couple Tekkan Yosano (1873-1935) and Akiko Yosano (1878-1942) founded the magazine Myōjō (The Morning Star). Akiko’s collection of poems Midaregami (Unkempt Hair, 1901) pays homage to the sublime of human emotions. The rich environment that emerged around Myōjō also gave rise to sentient poets such as Takuboku Ishikawa (1885-1912) and Hakushū Kitahara (1885-1942).

Many poets felt the concentrated expression of the haiku as a forced jersey, and the circle around the journal Bungakkai (The Literary World) created the style of shintaishi (‘poems in a new form’), in which poems were still written in classical Japanese, but without being bound by it. classic poetry form demands. Tōson Shimazaki (1872-1943) published the collection Wakanashū (Spring Green, 1897), which consisted of longer lyrical and epic poems. Bin Ueda’s (1874-1916) translation of European lyricism into the new form was printed in the Kaichō-on collection (Echo from the Flood).