The construction boom in Mongolia, primarily in Ulaanbaatar, has led to a large supply of apartments (new buildings, apartments from the socialist era, renovated and not renovated) as well as single-family houses. The real estate market is growing and broker offices in Ulaanbaatar, Darkhan and Erdenet are now part of the cityscape.

Advertisements and offers for houses and apartments can be found in the daily newspapers, on television and on the Internet (living in Mongolia).

The prices are very different and for new apartments and completely renovated old apartments have risen rapidly in recent years, especially for foreigners.

However, property prices have fallen in the wake of the economic crisis and the high vacancy rate, even if only minimally by one to two percent per square meter.

The decisive factor for the monthly rent is the location. A modern furnished three-room apartment in the center costs from 1,000 USD. The additional costs are to be borne by the tenant.

The supply of everything you need for life is no longer a problem in Ulaanbaatar and with restrictions in Erdenet, Darkhan and in the aim centers. Fruit, vegetables, dairy products, meat and sausage products, juices, mineral water, pasta are offered in abundance in small and large supermarkets.

Sweets, cookies, chocolate bars, plastic toys and instant soups can be found in every sum shop, in every street kiosk and in every shop, even in the most remote areas.

To the annoyance of local producers, most of the products, food and luxury goods as well as industrial goods come from abroad.

From cosmetics to clothing and accessories, almost all luxury brands in Asia, Europe and America are represented in Ulaanbaatar.

In Ulaanbaatar, modern, multi-storey department stores have sprung up like mushrooms in recent years.

In addition, goods of every type and price range, especially from China and Korea, are offered in sometimes huge market halls, directly from the container or at stands and stalls in open spaces.

The prices for local products, including herbs, vegetables and fruit in summer, e.g. B. Melons from the Khovd-Aimag, are still cheap.

A wide range of restaurants, cafes, pubs, snack bars and canteens are available to domestic and foreign guests. Here, too, the quality of the food and service has improved.

The department stores and retail stores are also open on Saturdays and mostly on Sundays as well. The large markets each close on Monday and Friday.

In recent years the cost of living has increased not insignificantly.

Food and energy in particular have become more expensive, leading to increasing protests against government policies. 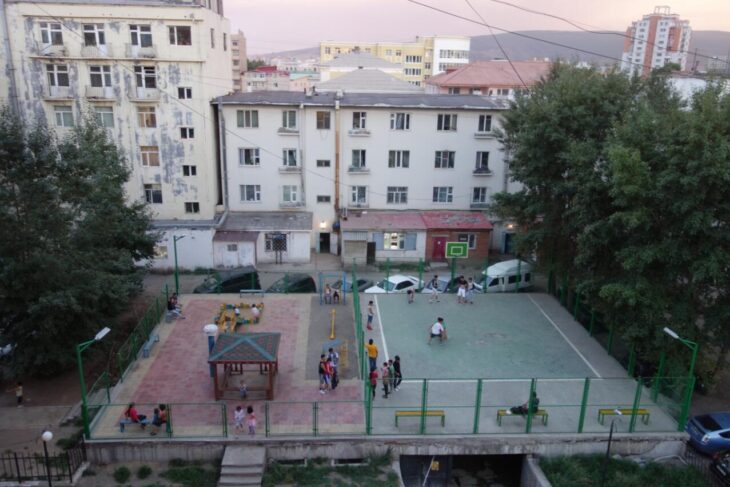 The favorite food of most Mongols is buuz, steamed dumplings filled with meat, khushuur, the same thing, only fried and mostly as a side dish, banj, boiled dumplings. Pasta stew with meat and a goulash dish made from pasta, meat, potatoes and cabbage are highly recommended even in the simplest restaurants.

Khorkhog and Boodog – mutton, goats or marmot meat cooked in the jug and now also often with potatoes, carrots and beets, are part of the festive meals at summer picnics and are increasingly on the menus of better restaurants.

Aaruul, cheese dried in the air, has a sour taste and is not missing in any kitchen. Today every supermarket also offers this typical “nibble”.

The Mongolian national drinks are Airag, fermented mare’s milk and Suutei Tsai – tea with milk, salt and butter are added. The respective quantities can vary greatly from region to region. In the cities, black tea, green tea, herbal tea, coffee, juices or lemonade are also served with food.

Alcohol consumption is widespread in both the city and the countryside. Classic Mongolian alcohols include Airag (around 6%), Arkhi (vodka) and homemade milk schnapps. In the cities, everyone over 21 can get beer, wine, liqueurs, brandies and whiskey.

The Goethe School is a private general education Mongolian school with grades one to twelve. 32 teachers, including two German, teach about 400 students.

In addition to the Mongolian general education school in South Korea, there are three Mongolian schools in Ulaanbaatar that teach according to the Cambridge program.

Four general schools offer increased German lessons, including the 50th school and one school each in Darkkhan and Orkhon-Aimag. At the Goethe School and the 38th “Alexander von Humboldt” School, there are Mongolian German teachers as well as native speakers.

In the meantime, 3,000 pupils are studying here in a new building with spacious lounges, a school canteen and modern classrooms.