In the UN report on human development, published in December 2019, Mongolia ranks 92nd out of 189 nations with 0.735 points and thus shows a steadily increasing trend in terms of points. In 1980 the value was still 0.524.

The time difference to Germany is +7 hours, in summer +6 hours, since summer time no longer applies since 2017. It was only reintroduced in Mongolia in 2015. The difference between Ulaanbaatar time (ULAT) and coordinated universal time (UTC / GMT) is +8 hours.

On the night of September 23-24, 2016, the clocks in Mongolia were put forward by one hour for the last time.

There are two time zones within Mongolia. The difference between Ulaanbaatar and the western region (Khovd time) is minus one hour.

The national currency is the tugrug (MNT).

Mongolia, with its extreme climatic and geographical conditions, still has intact but very fragile ecosystems and a unique biodiversity. The negative effects of climate change with a rise in temperature, a fall in precipitation and an increase in natural disasters are clearly noticeable in Mongolia, albeit very different from region to region. As a result of the rapid economic growth based on the mining of rich mineral deposits, not only the consumption of energy and water, but also of the landscape is increasing rapidly. The natural resources are not used sustainably.

According to areacodesexplorer, the most important ecosystems of Mongolia, the forests and mountain forest steppes, are seriously endangered as a result of climate change, but also due to incorrect management – irregular use, major fires and overgrazing of the steppe areas. The supply of fresh water will also pose problems for the country in the foreseeable future. Climate change, large-scale land use changes and an outdated water supply and water disposal infrastructure have already contributed to the deterioration of the living conditions of the local population in some regions. Industrial wastewater is often discharged into rivers and lakes in an uncontrolled manner, the treatment plants do not meet the requirements, so that the pollution of water bodies close to settlements increases. Global warming and mining activities are partly responsible for the progression of desertification and desertification from south to north.

After 1992, 30 new nature reserves were added to the existing 12 nature reserves. About eleven percent of the country’s area is under nature protection, including strictly protected areas such as the Uvs-Nuur basin, national parks such as Gobi-Gurvan-Saikhan, nature reserves such as the Bogdkhan-Uul and natural monuments such as Eej Khairkhan. Unfortunately, the implementation of the relevant nature conservation legislation leaves something to be desired due to insufficient financial and human resources.

A uniform nature conservation movement has not yet emerged. The individual groups only act for their respective project (against the exploitation of the respective rivers, against the development of certain landscapes, protests against the granting of mining licenses in certain areas, etc.).

In the Environmental Performance Index 2020, Mongolia ranks 147th out of 180 countries, 64 places lower than in 2018. In the air pollution category, Mongolia ranks only 173.

At its meeting on August 21, 2019, the government decided to expand the protected areas. Territories are included in 13 sums in six aimags. This means that special nature conservation provisions apply to almost 21 percent of the Mongolian territory.

The Minister for Nature, Environment and Tourism, N. Tserenbat, initiated the ” Green Pass ” campaign with the aim of making young people in particular aware of environmental and nature protection. To date, 50,000 university students and 543 general education schools have received the pass.

Mongolia is characterized by an extremely continental, winter-cold dry climate within the temperate zone. The transition times are short: a long, cold winter is followed by a short, stormy spring, and a warm, relatively rainy summer is followed by a mild, dry autumn. The first snow can fall in Ulaanbaatar in September. Winter starts at the end of October and lasts until the beginning of April. The growing season is limited to summer from early June to late August. In autumn it can still be warm during the day, but the temperatures can drop below freezing at night. Rainfall falls mainly in summer, with the north and west receiving an average of 600 mm of rain, while the Gobi does not fall more than 100 mm. The temperatures vary greatly between the seasons: – 50 °C in winter, + 40 ° in summer. 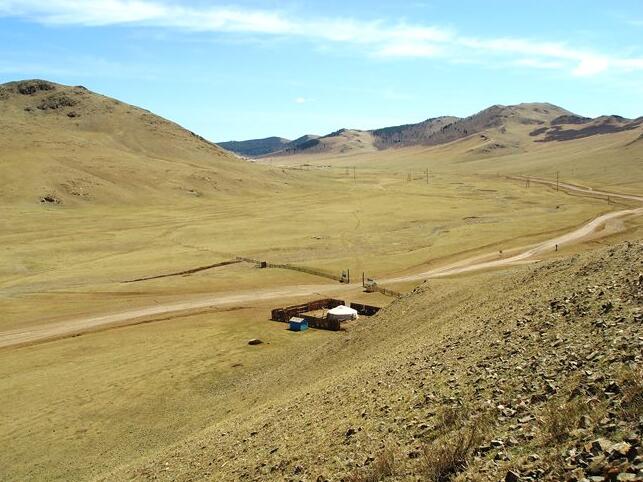