In view of the fact that only 3.5 million hectares or two percent of the country’s area is actually suitable for arable farming, it has developed considerably since the 1950’s. The plant production cooperatives cultivated grain, potatoes and fodder crops mainly in the Selenge and Khentii aimag as well as in the Central Aimag. Before 1990, 700,000 to 880,000 tons of grain were harvested annually and could even be exported.

After 1990 the cultivation of grain, potatoes, fodder plants and vegetables sank drastically, the land lay fallow – in 2003 only 162,000 tons of grain were brought in – before the industry began to recover in the late 1990’s. Small and large agricultural companies emerged, but not always led by trained agronomists.

According to naturegnosis, the Mongolian farmers, like the animal owners, are demanding more support from the state in order to be able to reject cheap imports in the future.

It is about low-interest loans for the purchase of animal feed and machines and about stabilizing the domestic markets through a targeted tax policy.

Modern harvesting technology and 8,000 tons of elite seeds were also delivered from Russia.

The need for wheat and potatoes could be met from their own resources.

Every year, the focus of agricultural policy is on preparing for winter (moving to suitable winter storage, possible alternative areas, stocking of feed, water supply, provision of energy and fuel, food, medical care, school and preschool care in the event of natural or other disasters). 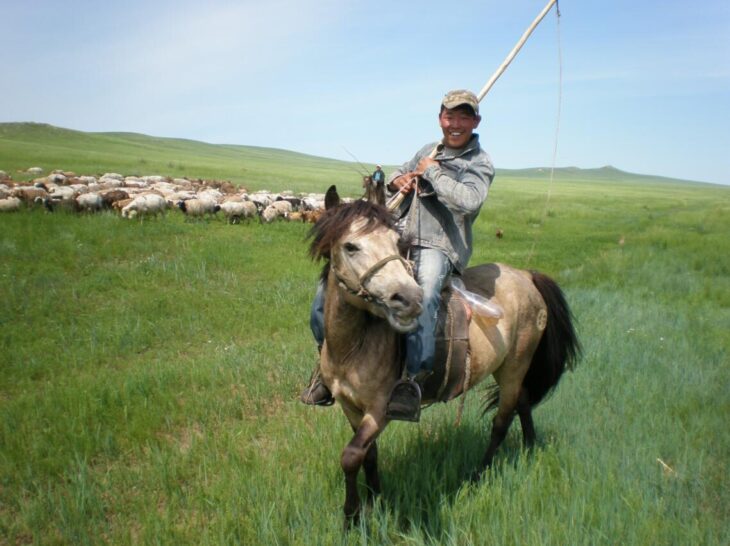 Since the 1960’s, the forest resources along the traffic routes have been used industrially, raw and sawn timber exported. The forest and wood processing companies with their 20,000 workers produced concertina bars for the Gers, wooden vessels, doors, windows and furniture for the domestic market.

Today there are still 54 privatized forestry companies and an estimated 500 small sawmills and woodworking companies.

According to the Mongolian Forest Act of 1995, the forest areas are divided into a “strictly protected zone”, a “protected zone” and a “useful zone”, about seven percent of the forests. Commercial wood use is only permitted in the utility zone.

Mongolia is rich in huntable animal populations, 51 of the 130 mammal species are suitable for hunting.

After the fall of the Wall, hunting as a means of livelihood security increased considerably. Despite restrictive hunting laws, some of the heavily hunted animal species are now endangered, such as musk deer, maral deer, brown bear, elk, sable, red fox, hermlin, badger or marten.

Fishing industry has never played a major role in Mongolia, although the lakes and rivers are rich in fish stocks. Before the fall of the Berlin Wall, the fish processing industry produced only 400 tons annually for export.

Today fishing is also more widespread among the Mongols as an additional source of income.

Illegal hunting and fishing have become a problem for the protection of rare species.

In the service sector, tourism has developed particularly positively in recent years and has become an important source of foreign currency income for the country.

The main season is May to September, but the concepts of the government and the tourism authority plan to inspire foreign tourists for the Mongolian winter.

In addition to the largest state tourism company “Juulchin “(traveler) exist today many private tourism providers in Mongolia, all have their own home pages have, the website of the Ministry for the Environment, Green Development and Tourism, however, is available only in Mongolian are available.

The then President Ts. Elbegdorj had traveled to Berlin at the head of a high-ranking delegation and opened the Mongolian stand in the exhibition halls under the radio tower on March 4th, 2015. It was the evening before Guest at the opening gala designed by Mongolian artistsin the CityCube Berlin.

The then Minister for the Environment, Green Development and Tourism D. Oyunkhorol stated in her opening speech that the goal of government policy is to develop tourism into the most important branch of the economy after agriculture and mining; in 2020 it should contribute 14 percent to GDP, now it is just over five percent.

Her successor in the office of Environment and Tourism Minister Namsrain Tserenbat is continuing this line.

The goal is to welcome one million tourists in 2020 and increase tourism income to USD 1 billion. Then came Covid-19.

The year 2020 was a disaster for the Mongolian tourism industry.

The borders have been closed to foreign tourists since January 2020 and will likely remain so until at least March 2021. Income fell by 90 percent, and domestic tourism could by no means compensate for the absence of foreign tourists.

In addition, it will be difficult to develop tourism without sustainable nature conservation. More and more organizations and environmental groups have committed themselves to the protection of the Mongolian landscapes and cultural assets. However, they each fight for individual projects.

The success is therefore still low.