In the elections to the Grand State Assembly in 1992, the MRVP (today MVP) won 90% of the seats in the State Assembly with 71 out of 76 seats, although it only won 57.2% of the votes. One reason for this is the majority vote, since then calls for a move towards proportional representation or a mixed system have been raised again and again.

In 1996, the two largest opposition parties, the Mongolian National Democratic Party, had each other and the Social Democratic Party merged with three smaller ones in the electoral alliance “Democratic Union” in order to be able to stand up to the seemingly overpowering MRVP. The elections ended in surprise. After 75 years of almost undisturbed sole government, the MRVP only won 25 of the 76 parliamentary seats. The DU provided the government, but was not able to keep its election promises: social and economic reforms, promotion of the livestock industry, small and medium-sized farms and the introduction of market economy structures for the benefit of all Mongols. There were also internal quarrels and allegations of corruption. The young democratic forces were not prepared for a takeover of power in terms of program or personnel. Social discontent grew and in the first democratic local elections in October 1996 they won only 40 percent of the seats, most aimags and sums continued to be governed by the MRVP. In addition, the MRVP fueled social fears and boycotted parliamentary processes and legislative procedures. The MRVP candidate was already in the 1997 presidential election N. Bagabandi won well ahead of his DU competitor P. Ochirbat.

Up to the elections in 2000, four DU prime ministers succeeded each other, including the later President Ts. Elbegdorj, who held the office of head of government from July to October 1998 and remained provisional head of government until December.

According to ehealthfacts, the political situation was worsened by the murder of Infrastructure Minister S. Zorig, co-founder of the democratic movement in Mongolia and a candidate for the post of Prime Minister. To date this murder has not been solved. Investigators died a sudden death, a murder suspect fled abroad and was brought back to Mongolia years later, where he died shortly after his release from prison.

After four years of sole government, the DU had to draw a bitter balance. The economy was not consolidated, and self-sufficiency with fuel, energy and basic food was not guaranteed. Only gold and alcohol production flourished, all other sectors suffered considerable losses, which of course also had a negative effect on the export volume.

The 2000 elections ended with a resounding victory for the MRVP, which won 72 of the 76 seats. There was no serious opposition. Nambaryn Enkhbayar, the chairman of the victorious party, never tired of declaring that his role models were not Lenin or Choibalsan, but Tony Blair and Gerhard Schröder. Enkhbayar, elected Prime Minister, developed into the new strong man of the MRVP and the Mongolian political landscape in general.

In the presidential elections a year later, the MRVP candidate Bagabandi won again.

In the 2004 elections, there was a stalemate between the ruling party and the opposition.

After long negotiations, both sides agreed on a grand coalition. Ts. Elbegdorj (DP) was elected Prime Minister and N. Enkhbayar (MRVP) was elected Chairman of the Grand State Assembly.

Domestically, the time was marked by constant protests by the population, who accused the government of not doing enough to improve their living conditions, of being preoccupied with disputes within and between the parties, and of accepting bribes from international mining multinationals. Numerous civil movements emerged, the most active being the ” Violet Revolution “, the “Seniors’ League” and “Reforms now”.

Already in the run-up to the 2008 elections there were protests against preferential treatment of the MRVP in the election campaign by the nationwide media, and mutual accusations of violations of the right to vote.

After the first election results had been published and the MRVP was loudly celebrating itself as the winner, the discontent on the part of the losers grew louder and protests broke out, which ultimately culminated in violent clashes between demonstrators and security forces. The proclamation of the first state of emergency in the history of Mongolia by President Enkhbayar, five dead, 300 injured and over 700 arrested were among the terrible results of “Black Tuesday”.

Finally, the DP and MRVP agreed on a joint government. Within the DP and within the MRVP, however, wing clashes broke out, as a result of which Elbegdorj, who was against the entry of the DP into the government, handed over the chairmanship to N. Altankhuyag. N. Enkhbayar, who had become too powerful for many in his own party, lost the 2009 presidential election and blamed his own party friends for it.

Ts. Elbegdorj narrowly won the elections and in the MRVP the fighting intensified, personal enmities arose. The chairman of the party, ex-prime minister, ex-chairman of the Grand State Assembly and ex-president N. Enkhbayar took the decision of 2010 to rename the party the Mongolian People’s Party as an opportunity to leave the party. Much to the annoyance of the new MVP management, he re-founded the MRVP with some loyal followers. 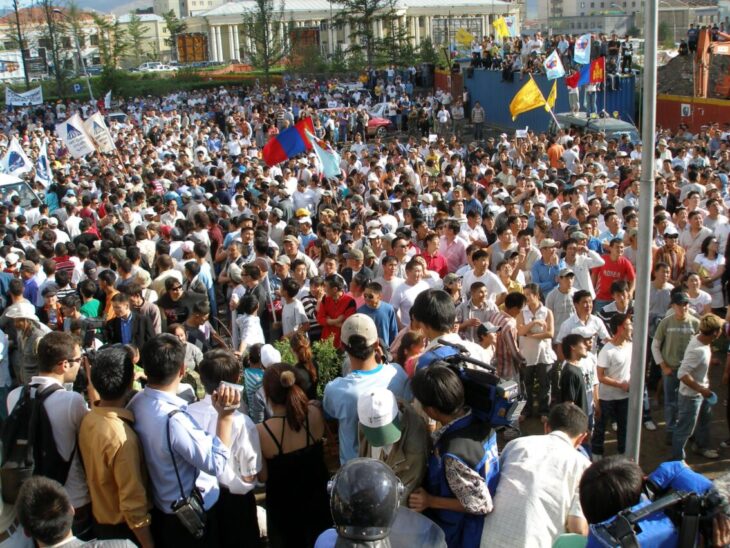