The elections for the Grand State Assembly 2020 took place on June 24, as planned, taking into account special security measures due to the Covid 19 pandemic.

Voters in quarantine facilities did not have the opportunity to exercise their right to vote.

This also applied to the Mongols who live and work abroad.

According to ethnicityology, there were 76 seats in 29 constituencies.

On June 2nd, the Central Election Commission (ZWK) announced that 485 nominees from 13 parties and 4 electoral alliances as well as 121 independent candidates had received the necessary certificates of participation.

The MVP and DP had each nominated 76 candidates, the other parties and alliances between 15 and 74.

In connection with election advertising, the resolutions passed by the government to protect against Covid-19 had to be observed (distance, mask requirement, limited audience, limited speaking time for candidates).

Prime Minister and Chairman of the MVP U. Khurelsukh used the successful policy of the past four years, economic growth, internationally recognized corona measures, and the transfer of privatized natural resources back into the hands of the state (Erdenet, Tavantolgoi, Baganuur, Bor Undur, Salkhit, Noyon-Uul) . We will overcome poverty in the country “.

Erdene, chairman of the DP, referred to increased poverty, corruption and abuse of power. Why is Mongolia on the blacklist? (EU and FATF).Some prominent MVP MPs were unable to win a majority for their nomination in the MVP conference.

Folk musician S. Javkhlan, the only independent candidate who made it to the State Assembly in 2016, has been a member of the DP since May 14th.

Of the original 698 candidates from parties, alliances and the independents, 51 had been refused entry by the Central Election Commission.

This also applied to the former member of the MVP Nomtoibayar, who wanted to run as a self-employed person, apparently had received his certificate, but is currently in prison.

Ex-Prime Minister J. Erdenebat won his seat in the State Assembly from prison.

Her supporters accuse the ruling MVP of having abolished democracy in the country long ago.

The elections on June 24 went off without a hitch.

The ruling MVP won 62 mandates, the DP eleven, one mandate each went to “Our Alliance”, “Vote the Right” and to the independent candidate N. Altankhuyag, former chairman of the DP, former prime minister.

Immediately after the announcement of the election results, S. Erdene, the chairman of the DP, offered to resign and J. Batzandan, the head of the electoral alliance “New Alliance”, which had not won a single mandate, took responsibility for the defeat and resigned.

It was of course not long before the legitimacy of the election results was called into question.

Both the President, the Electoral Commission and the MVP voted for a recount of the votes over the weekend.

According to Sodnomtseren, no irregularities were discovered, but an additional 71 million tugrug had to be spent.

The elections went properly, 300 foreign journalists and observers as well as observers from parties, alliances and the independents found no violations of the law.

In any case, the race to succeed S. Erdene has already begun at the DP.

For observers, reasons for the high election victory of the ruling party are also based on the fact that the party had sent many young and / or “unspent” candidates into the race and failed to nominate MPs who were involved in the lending affair. Dealing with the corona crisis would also have contributed to the MVP’s election victory.

The ruling party also benefited from the electoral system and electoral law.

However, the new government is only now facing the real challenges. Coping with the serious consequences of the corona pandemic: high unemployment, lower government income with increased expenditure (for social assistance, unemployment benefits, etc.). The tourism industry was hit particularly hard: 88% of the orders were lost.

From the election program of the MVP: wage and salary increases to compensate for inflation, cheap loans for people with low incomes, Erdenet, Oyutolgoi should make a greater contribution to strengthening local small and medium-sized enterprises, and all mining companies should strengthen the interests of the local population take into account that the differences between town and country should be reduced.

After the official handover of the election results to President Kh. Battulga on June 30, the latter decided to convene the first session of the newly elected State Assembly on the same day.

75 of the 76 elected MPs took their oath. J. Erdenebat is in custody and was unable to attend the ceremony.

In his opening speech, the President addressed the major challenges that could only be overcome together.

It is an important task to fight corruption and abuse of office.

On the afternoon of June 30, 2020, 100 percent of the MPs present re-elected G. Zandanshatar as chairman.

T. Ayursuren (MVP) and Ms. S. Oyuntuya (DP), previously head of the Bayangol district, were elected as his deputies.

The MVP faction continues to be led by D. Togtokhsuren, the DP faction by D. Ganbat. 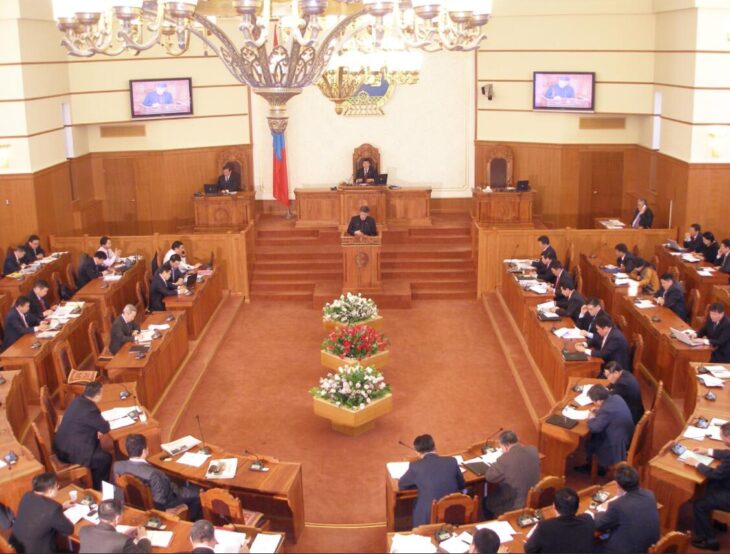