According to zipcodesexplorer, the official national currency is the Tugrug (MNT), which was introduced in 1925 and has been freely convertible since 1992.

In all branches of the commercial banks, US dollars and euros can easily be exchanged at the current exchange rate and money can be withdrawn in the local currency at their machines with all major credit cards. Goods and services must be paid for in Tugrug, but credit cards are accepted in all major shops, restaurants and hotels.

In the countryside, these options only apply in the aim centers.

The current exchange rate can be found in the daily and weekly newspapers as well as the notices in the Mongolbank, that is the Mongolian central bank.

In the banks anyway, but also in the state-approved exchange offices, here at a slightly cheaper rate, money can be exchanged safely. Beware of private foreign exchange dealers in the streets and markets. The risk of being cheated is great.

In recent years, the Tugrug has become weaker and weaker against the US dollar and the euro; it only began to recover in mid-2017 before it began to weaken again in autumn 2018. Also a consequence of the government crisis.

The safest way to transfer money in both directions is through the Trade and Development Bank, Golomt Bank, Khaan Bank, with over 550 branches across the country, and others. All banks offer all modern financial services such as online banking.

Bank failures happen again and again. The savings bank had to file for bankruptcy in 2013 and was merged with the Turiin Bank (state bank). Spectacular bank failures in recent years have affected the Anod Bank and the Coin Bank (Zoos Bank).

The most important festivals and holidays for the Mongols are Naadam and Tsagaan Sar, but Women’s, Children’s and Mother’s Day are also extensively celebrated with festive events and in the family.

From February 24 to 27, 2020, the Mongolians will celebrate the beginning of the “White (Metal) Mouse Year”.

By decision of the State Assembly, Chinggis-Khaan’s birthday has been celebrated as “National Pride Day” since 2012 and is non-working.

The determination of the day is to be understood symbolically, as there are no historical records about it, not even in the “Secret History”.

We were talking about May 3rd and 31st. Finally, it was agreed on the first day of the first winter month in the year of the water horse in the third 60-year cycle according to the Tibetan / Mongolian zodiac calendar. This corresponded to November 14, 1162 according to today’s calendar.

At the same time as December 29th was set as a non-working holiday, November 26th was declared a working day and henceforth declared as the “day of the foundation of the republic”.

This decision was reversed at the meeting of the Grand State Assembly in November 2016. November 26th is again an official non-working holiday.

The law on the public holidays of Mongolia specifies eight public holidays (one to five days off), in December 2019 the MPs decided on a ninth holiday: the Ikh Duitsen or Duichin Udur of the Burkhan Bagsh (Buddha) – procreation, birth, Enlightenment, entrance into nirvana.

In future, the day will be celebrated as a non-working holiday on the 15th of the first summer month.

September 10th – Day to honor the victims of political repression

Since 1961, homosexuality is no longer a criminal offense in Mongolia.

For a long time, the topic of different sexual orientations was hardly an issue in society, especially because gays, lesbians, bisexuals or transgender people rarely identified themselves, and their sexual preferences were by no means accepted in society.

With the increase in attacks against homosexuals, including foreigners, after the turn of the millennium, the legislature endeavored to better protect them and to combat inequality in public life.

In 2012 the National Human Rights Commission reported that 80 percent of LGBT citizens had their civil and human rights violated.

The case of a raped man who was found dead shortly afterwards caused horror not only in Ulaanbaatar. Suicide or death as a result of rape, this question has never been resolved.

The police did nothing as the law only mentions rape among women.

The Anti-Discrimination Act of 2015 also included male rape as a criminal offense and harsher penalties for hate crimes are imposed.

Law enforcement personnel are trained to better identify such crimes.

The “Center for Gays, Lesbians, Bisexuals and Transgender (LGBT) ” has existed in Ulaanbaatar for ten years. It is located in an inconspicuous old building in a small side street. Hard to find for the uninitiated, no sign points to the center. In public, gays, lesbians and transgender people deliberately avoid showing their orientation. The rejection and / or lack of understanding in society are still great.

A marriage or registered civil partnership for gay couples is not yet recognized in Mongolia.

The Mongolian languages are counted as the Turkish and Tungus to the Altaic languages. They are agglutinating languages that have similarities in structure and grammar.

Different dialects are spoken in Mongolia itself – Khalkh Mongolian is the most common.

Since the beginning of the 13th century, the Mongols have been using the Uighur script, which is derived from a variant of the Aramaic script.

Old Mongolian, Uighur-Mongolian or Classical Mongolian is the longest-used script among the Mongols. In the meantime, square script, Soyombo script, Phagspa script or the clear script (Tod Bichig) were used.

In 1941 the Latin alphabet was used for a short time before the government and the MRVP decided to introduce the slightly modified Cyrillic alphabet, which is still valid today.

In the course of returning to the traditional culture and ancient history of the Mongols since the fall of the Wall, all attempts to reintroduce classical Mongolian as the official script failed. But the old Uighur-Mongolian script became a compulsory subject in general schools and universities. Old Mongolian was used more and more often, mostly as a decorative accessory, next to modern Mongolian on printed matter, signs etc. Finally, in 2011, President Ts. Elbegdorj ordered the use of the old script on an equal footing with the Cyrillic on all official documents of the ministries and authorities. Quite an effort, because in contrast to the old script in Inner Mongolia, which was and is used without a break to this day,

Currently only a few media offer their contributions in Old Mongolian. This includes news.mn. 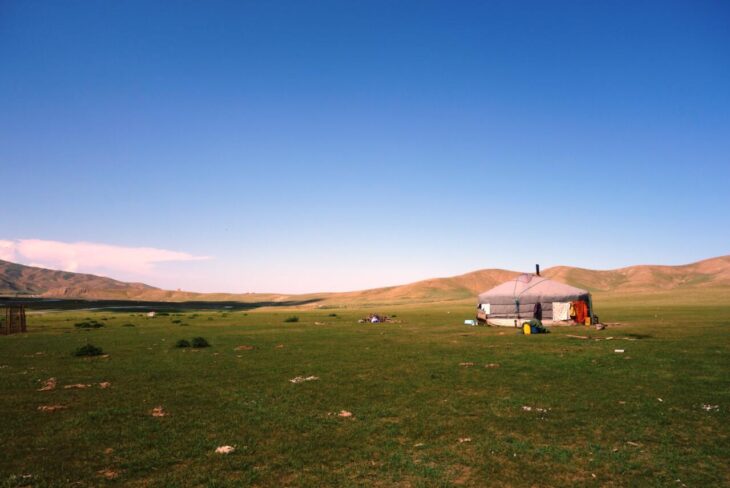