As part of the Mongolia-EU partnership and cooperation agreement, delegations from both countries met on June 27, 2019 in Ulaanbaatar for their 19th joint meetingBoth sides emphasized the importance of further deepening their cooperation in the areas of politics, business and human rights.

virtual meeting The virtual meeting of the Trade and Investment Subcommittee of the Mongolia-EU Joint Committee on November 23, 2020 served to exchange experiences on the current economic situation and trade policy.

The bilateral cooperation in business, trade and investment was discussed.

In addition, the agreement between the EU and Mongolia with regard to animal and plant health and the expansion of cooperation in the raw materials sector were discussed.

The results of the meeting will be reported via video conference at the regular meeting of the Joint Committee in December.

According to historyaah, the Federal Foreign Office regularly publishes current information about the Covid-19 pandemic in Mongolia.

Relations with Russia and the PRC

All Mongolian governments have always attached particular importance to relations with its northern neighbor Russia and its southern neighbor China.

During the state visits by the presidents of Russia and China to Mongolia in August and September 2014, respectively, President Elbegdorj said that due to Mongolia’s geographical proximity to these two countries, these relations would always play an important role for Mongolia.

The then Foreign Minister Ts. Munkh-Orgil himself confirmed this again after the Chinese Foreign Ministry’s demands on November 17 that the Mongolian government should prevent the Dalai Lama from visiting the country and not allow him to enter the country. At a press conference in Ulaanbaatar, the spokesman for the Gandan Monastery of S. Davaapurev stated that the Dalai Lama’s visit was for religious purposes only. The “Supreme Saint” will pray with the Mongolian believers and share his wisdom and experiences with them.

The Ministry of Foreign Affairs in China has, among other things, the planned visit of the Mongolian Deputy Prime Minister U. Khurelsukh to China, the consultative meeting between the parliaments of both countries and the Russian-Mongolian-Chinese ministerial meeting in Moscow from December 5th to 7th (as part of the Transport Ministers’ Conference the Asia-Pacific region) canceled. It was planned to sign important economic agreements (transport, railway construction, granting of cheap loans) at all meetings. The Mongolian foreign minister assured once again that the invitation for the head of the Lamaist church was solely due to the Mongolian clergy, and the head lama of the Gandan monastery in Choijamts also stated that the Dalai Lama’s visit was exclusively for religious purposes.

Munkh-Orgil expressed the hope that the Chinese side would change their tough stance on the Mongolian government very soon.

This hope was not deceptive.

At the invitation of his Chinese counterpart Li Keqiang, Prime Minister J. Erdenebat made an official visit to China from May 12th to 15th.

In addition, the Mongolian Prime Minister accepted President Xi Jinping’s invitation to participate in the Belt & Road Forum on May 14th and 15th.

During the state visit, both sides signed a total of 21 contracts, agreements and declarations of intent to intensify economic, cultural and political cooperation.

Among other things, China has promised Mongolia an interest-free instant loan of 350 million yuan to overcome the current economic crisis.

The swap agreement between the People’s Bank of the PR China and the Mongolbank will also be extended.

Overall, Mongolia can expect financial donations of two billion yuan from China over the next three years.

East – Economic Forum The event launched on the initiative of President Putin is intended to serve as an important international platform on which development strategies for political, economic and cultural cooperation between Russia and the states from the Asia-Pacific region are discussed.

President Kh.Battulga headed the Mongolian delegation that participated in the 4th Eastern Economic Forum (EEF) from September 11-13, 2018 in Vladivostok, Russia.

On the topic of the plenary session on September 12th: “The Far East: Expanded Limits and Possibilities”, W. Putin, Shinzo Abe, Lee Nak-Yeon and Kh. Battulga debated an improvement in political and economic stability in the region and an expansion international cooperation in the Asia-Pacific region.

“This region offers great business prospects. Foreign investors should not allow themselves to be negatively influenced by stereotypes, the Russian head of state wished.

On the sidelines of the forum, Battulga held talks with his Chinese and Russian counterparts and with the heads of government of Japan and South Korea. 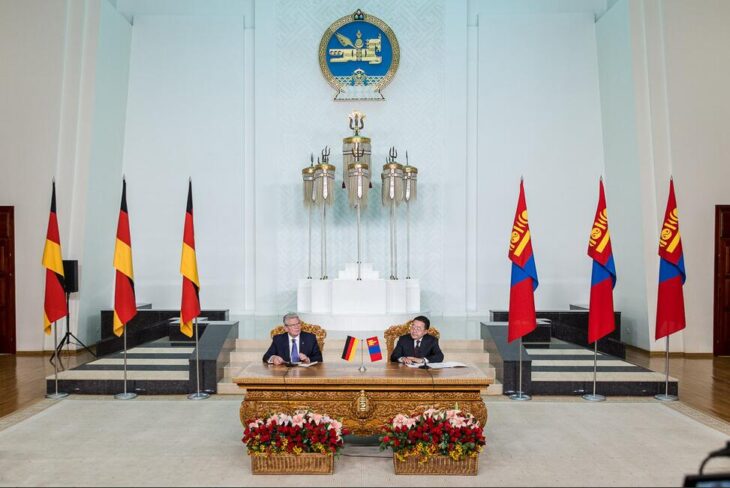