The Russian military maneuvers with units of the army, the navy and the air force from September 11 to 17 in Zugol east of Lake Baikal took part in addition to troops of the Chinese armed forces and Mongolian military personnel.

China, which participated for the first time, had sent 3,200 soldiers and 100 aircraft.

“The armed forces of the three countries work together to ensure security and stability in Asia”, emphasized W. Putin during the maneuver visit on September 12th.

A high-ranking Mongolian delegation led by Minister of State Shadar Said U. Enkhtuvshin was among the participants at the 23rd International Economic Forum from June 6th to 8th, 2019 in Saint Petersburg.

The main theme of this year’s forum was “Shaping the Agenda for Sustainable Development”.

Enkhtuvshin met with the First Deputy of the Russian Prime Minister and Finance Minister Anton Siluanov as well as with the advisor to President W. Putin Igor Levitin for talks about the harmonization of the Eurasian economic program, the Mongolian development program and the Chinese initiative “Belt and Road” (New Silk Road) in the project “Mongolian-Russian-Chinese economic corridor”.

In addition, both sides discussed the preparation of the celebrations on the occasion of the 80th anniversary of the joint victory over the Japanese troops on Khalkhyn Gol (near Nomonkhan) in Mongolia and the participation of a Mongolian delegation at the Eastern Economic Forum in Vladivostok in September 2019.

At the invitation of Prime Minister U. Khurelsukh, Vice President of the PRC Wang Qishan paid a friendship visit to Mongolia from July 10th to 12th.

In the talks with Khurelsukh, with the Chairman of the State Assembly G. Zandanshatar and with President Kh. Battulga, the focus was on closer links between the Chinese Silk Road Initiative and Mongolia’s “Development Program”. “Mutually beneficial cooperation and private exchange as well as regional cooperation should be further deepened”.

During the visit, Qishan and Khurelsukh attended the inauguration ceremony of the first expressway in Mongolia.

2019 marked the 80th anniversary of the victory of Russian-Mongolian troops in the Battle of Khalkhyn Gol.

On the occasion of this anniversary, President W. Putin made a two-day official state visit to Mongolia.

On September 3, 2019, the two presidents, Presidents Putin and Kh. Battulga, signed an agreement on friendly relations and a lasting all-encompassing strategic partnership. At the same time, both sides decided on a joint investment fund for projects in mining, infrastructure development and agriculture.

Further agreements were concluded on cooperation in the fight against terrorism and on the promotion of regional cooperation. 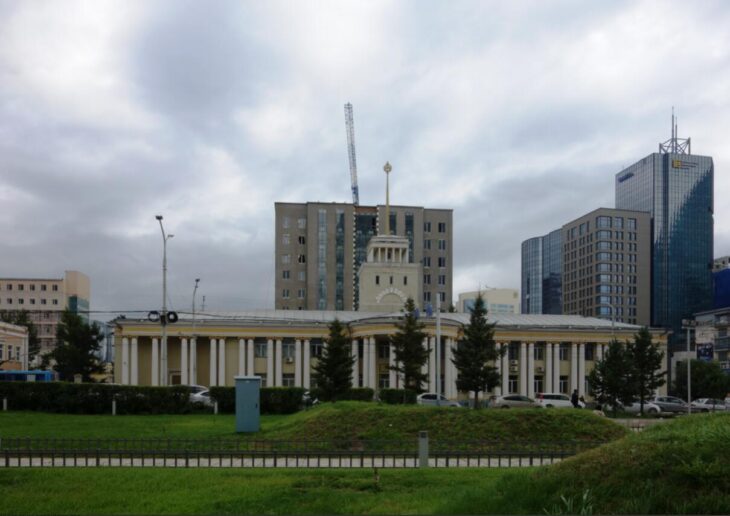 Mongolia is pursuing a “third neighbor policy” as a counterbalance to the possible appropriation by its immediate neighbors, Russia and China.

She uses her good relations with both North and South Korea to act as a mediator on the Korean peninsula.

Mongolia also maintains stable external relations with Japan, as evidenced by regular mutual visits at high and high levels. Japan is also the largest single donor to Mongolia (ahead of the USA and Germany).

During the state visit of the Mongolian Prime Minister J. Erdenebat to Japan in October 2016, he and his Japanese counterpart Shinzo Abe unanimously rated the North Korean nuclear weapons and missile tests as an “unprecedented level of danger”.

Mongolian top politicians like to use the opportunities to get into conversation with their counterparts at international conferences, especially in the Asia-Pacific region and in the Far East of Russia.

This was also the case at the Eastern Economic Forum in Vladivostok in September 2018.

The conversation with Shinzo Abe was about Japanese citizens who are being held captive in North Korea.

The Mongolian President Kh. Battulga pledged to support Mongolia to get the Japanese free.

The 11th ASEM summit in Ulaanbaatar on July 15 and 16, 2016 was overshadowed by the attack in Nice (France) in which 84 people lost their lives, the island dispute in the South China Sea with China and the attempted coup by parts of the Turkish military in Istanbul and Ankara.

The summit began on July 15 with a minute’s silence for the victims of the attack in Nice.

The security regulations in Ulaanbaatar and the surrounding area were high: all buildings, streets and places connected to the meeting in Ulaanbaatar were monitored by video cameras, a total of 1,100 cameras were in use, the security forces reported, access roads were temporarily blocked.

During the summit, President Tsakhiagiin Elbegdorj received Chancellor Angela Merkel. Merkel thanked for the very good organization of the summit meeting with heads of state and government as well as representatives from 51 Asian and European countries as well as the representatives of the EU and ASEAN.

Elbegdorj informed his German guest about the course of the parliamentary elections on June 29th and emphasized the fact that after 20 minutes the first results of the vote count were broadcast live on Mongolian television.

Both sides assured that they were interested in expanding economic relations and want to deepen international and regional cooperation. “Germany is our most important partner in Europe,” emphasized the Mongolian head of state at the end of the conversation.