It wasn’t a surprise.

The old and new prime ministers of Mongolia are called Ukhnaagiin Khurelsukh.

After he had been nominated for the office in the party committees with 100% approval, the large majority of the State Assembly also approved the proposal on July 2nd, 2020.

He had renounced the announced major restructuring of the government.

A new department was added: the Ministry of Culture.

Before that, culture belonged to the competence area of the Ministry of Education, Culture, Science and Sport.

Sport is now part of the Ministry of Health again.

According to the new constitution, only four ministers were allowed to be members of the state assembly at the same time.

There are three women in the government.

Most of the new government members had not previously held any prominent political positions, but were active in the relevant specialist departments. Ch. Khurelbaatar remains finance minister, Head of the State Chancellery L. Oyun-Erdene.

D. Sarangerel is moving from the Ministry of Health to the Environment Department.

According to extrareference, after 1990, more than 20 parties were founded in Mongolia, and the 36th political party was officially registered at the Supreme Court on February 21, 2020.

Very few of them could and are able to exert lasting influence on political events in the country. They were less tightly organized than the MRVP and, above all, hardly present in rural regions.

For a short time it seemed as if the Civil Courage Party, led by S. Oyun, sister of the murdered S. Zorig, could rise to become the third political force.

Hope was wrong. In the meantime S. Oyun has completely withdrawn from party work.

Since 2014 at the latest, the Grand State Assembly has developed into a two-party parliament.

Only the MVP and the DP are still vying for power.

However, the fronts between the two parties are not always open.

Inner-party wing battles play into the hands of the respective political competitor.

In 2017, 32 of 65 members of the MVP parliamentary group pushed for the overthrow of their own government.

Even the personnel debate after the lost presidential elections in 2017 about the chairman of the state assembly and chairman of the MVP M. Enkhbold did not necessarily help to stabilize the work of the government – especially under the conditions of a veritable economic crisis.

On the XXVIII. At the MVP’s party convention from November 20 to 23, 2017, Prime Minister U. Khurelsukh was elected as the new party chairman. He replaced M. Enkhbold, who was no longer running.

1,283 delegates from all Aimags and Duuregs represented 211,000 party members. In the end, 775 opted for Khurelsukh and 451 for Khayankhyarvaa.

The DP, which was led by S.Erdene, a member of the Grand State Assembly, former head of the state insurance and former district mayor of Bayangol, after the blatant election defeat in 2016, also lost the 2020 election.

After the renewed defeat in the elections to the Grand State Assembly In 2020, S. Erdene resigned on election evening. His successor will be elected at the party congress, which should take place in 2020.

The party congress was postponed due to Corona, but a new statute was adopted in December 2020, according to which the chairman would no longer be determined in a member survey, but by the party congress delegates.

On the other hand, ex-chairman Erdene resisted, who no longer recognizes his replacement as party chairman. 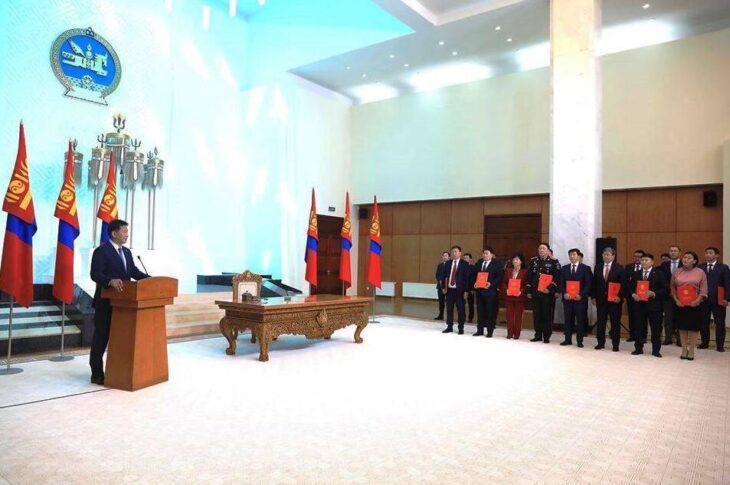 The current national anthem dates from 1950, the text by Ts. Damdinsuren, the music by B. Damdinsuren and L. Murdorj. After it was modified in 1961 to praise socialism and its leaders more strongly, the original text was valid again from 1991, but without the second stanza. In 2006 the hymn was again slightly changed to commemorate the glorious past under Chinggis-Khaan.

Holy hearth of all Mongols

Sacred deeds of our ocean-sized ancestors

With all the righteous nations of the world,

let us strengthen our friendship.

With all our determination and ability,

let us ascend our beloved Mongolia

Under the care of our outstanding national coat of arms,

consolidate the happiness of our great people. Let us bloom

our nationality, our culture and our language

Use the gift of freedom

Key to happiness, cornerstone of development