According to the law, women and men have equal rights and Mongolian women are actually emancipated, educated and take an active part in social and political lifepart. They are successful company bosses, engaged in international and national governmental and non-governmental organizations, are craftswomen, workers, saleswomen, teachers and doctors. Nonetheless, Mongolian society is more of a patriarchal society, with men being the head of the family, although the number of households run by women alone is increasing. Women are much less likely to be found in top political positions than in business. Women and children are most frequently exposed to domestic violence in all strata of the population. Alcohol abuse is a problem and, combined with unemployment and poverty, is a serious obstacle to economic and population development.

On February 1st, 2017, the law on protection against domestic violence came into force after the new government had renegotiated it from the amended Criminal Code. The Grand State Assembly approved the bill on December 22, 2016. In the past six years 94 people have lost their lives as a result of domestic violence, 4,102 people have been injured, some seriously. However, these are only the cases recorded by the police. The number of unreported cases is high. Neighbors and relatives are requested to inform the police or other authorities if necessary. Repeat offenders are treated as offenders. The police have announced that they will be setting up a department to combat domestic violence and prevent it.

The number of teenage pregnancies is increasing every year.

A lack of education and ignorance about contraceptive options are named as the main causes.

In 2015, the State Assembly passed a law regulating childcare in private institutions and earmarked funds for this in the state budget. The law came into force on January 1st, 2016. In the course of the economic and financial crisis and after changes and additions to the budget law, the MVP government canceled these funds. Funds are not to be made available again for the project until 2021. The responsible head of department in the Ministry of Labor and Social Security M. Bayarmaa calls for a change to this decision. There were no kindergarten places for 4,414 children in rural areas and 5,913 children in Ulaanbaatar. This would create extremely difficult conditions for parents to fulfill their professional obligations or to look for a job.

According to pharmacylib, over 56 percent of all employees in higher education are female, 79.3 percent in public education and even 87.1 percent in health care. Women also make up almost half of the livestock farmers. But only 12 women represent Mongolia as ambassadors abroad and only 17.1 percent of the members of the Grand State Assembly are women.

For the 2016 elections, a women’s quota of 30 percent was originally set for the candidate list.

On May 5, 2016, however, a majority of the members of the Grand State Assembly present voted for changes to the “Law on Elections”. In addition to the return to majority voting, which also reduces the chances of women, the envisaged quota of women for the candidate list has been reduced from 30 to 20 percent.

Cross-party, the women in the State Assembly worked together successfully, especially on family and social legislation. Now they feared that fewer women would be represented in the future state assembly. This fear has proven to be unfounded. Thirteen women were elected to the new state assembly – two more than in 2012. The government consisted of two women ministers (health and education). Deputy Foreign Minister was also a woman – Batmunkhiin Battsetseg, D. Sarangerel was the name of the new Minister of Health. Along with two other women, she is also represented in the new Khurelsukh cabinet (July 3, 2020).

As in the state assemblies from 2012 to 2016 and 2016 to 2020, this time too the women have come together in a group to work together for more social justice and against violence in the family.

In the report of the World Economic Forum on Gender Equality (Gender Gap) 2017, Mongolia came together in all four categories (health and chances of survival, education, political participation and economic opportunities) with 0.713 points in 53rd place among 144 countries. That is an improvement of four places over the previous year.

Mongolia scores particularly well when it comes to education (0.99 points and health and chances of survival (0.98). The gender gap is almost closed. 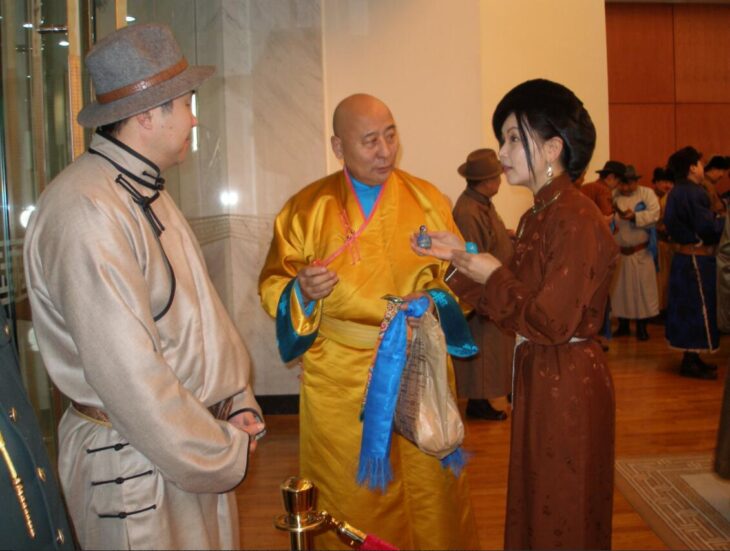