According to the constitution, only the capital Ulaanbaatar has official city status. Founded in 1639 as a nomad camp of the first head of the Lamaist church in Mongolia, I. Jabzundamba Khutagt, Urguu (palace yurt) quickly developed into a religious, economic and cultural center and in 1787 was given a permanent location between the mountains of Bogd Uul and Bayan Zurkh, Songino Khairkhan and Chingeltei on the banks of the Tuul and the same assigned. In 1911 Ikh Khuree “the Great Monastery” was renamed the capital of the autonomous Mongolia and renamed Niislel Khuree (main monastery), after the People’s Revolution of 1924 into “Ulaanbaatar”, the Red Warrior. Ulaanbaatar is the political, economic and cultural center of Mongolia. Almost half of the Mongolian population now lives in the “city”. Erdenet, officially Bayan-Undur, is the center of the Orkhon-Aimag, founded in 1994 and with 97,800 residents (2017) the second largest urban settlement in Mongolia. A total of 103,600 people live in the Orkhon Aimag (2017). Darkhan, the center of Darkhan-Uul-Aimag, which was also founded in 1994, is the third largest urban settlement in Mongolia with 84,256 residents (2017), Darkhan-Uul-Aimag has 101,879 residents (2017).

According to businesscarriers, the huge expansion of Mongolia and its extreme weather conditions make the country with respect to its roads before great challenges. There are direct flights between Ulaanbaatar and most of the provincial centers. So far, the only international airport in Mongolia was Buyant Ukhaa “Chinggis-Khaan” in Yarmag, 25 km from Ulaanbaatar.

Since 2019, Korean Airlines has lost its monopoly on the Incheon and Ulaanbaatar route. The Korean Asiana Airlines will serve the route twice a week.

With the help of the Japanese Agency for International Cooperation (JICA), a new international airport was built in the Khushigt Valley, 52 km southwest of Ulaanbaatar. The capacity will initially include three million passengers. Originally it was supposed to open in 2018, but the problem lay in the not yet completed feeder road.

In July 2019, Mongolia’s first expressway, built with the help of the People’s Republic of China, was inaugurated.

The six-lane highway is 32.2 km long and cost USD 140 million, the most important Mongolian-Chinese project to date under the Silk Road Initiative. The new road connects Ulaanbaatar and the new airfield in Central Aimag, which should be officially opened in summer 2020.

According to a government decision, all international flights should take off and land here from July 1st, 2020. The official name: “Chinggis Khaan”. The old airfield in Yarmag (Ulaanbaatar) is again only called “Buyant Ukhaa”. As a result of the corona crisis and the stop of all international tourist flights, “Buyant Ukhaa” continues to enjoy its preferred position among Mongolia’s airports.

The total length of the Mongolian railway line is 1,908 km, the most important connection, the Trans-Siberian railway line, leads from Moscow via Ulaanbaatar to Beijing.

As a transmongolian railway, the line runs from Ulaanbaatar to Beijing.

During the 3rd Conference of Transport Ministersof the Asia-Pacific region from December 5th to 9th, 2016 in Moscow, the then Minister of Transport of Mongolia D. Ganbat and the Deputy Transport Ministers of Russia and the PR of China Nikolay Assaul and Liu Xiaomin signed a contract on the Asian trunk road network. Ganbat emphasized the importance of this contract for the urgently needed improvement of the infrastructure in Mongolia and in the region.

There are only 2,500 km of tarred roads, which are also often in poor condition. The road from Ulaanbaatar to Altanbulag on the Russian border was recently repaired with loans from the World Bank. The Asian Development Bank is financing the road expansion from Ulaanbaatar to Zamyn Uud on the Chinese border.

Since 2013, the government has been implementing a road construction program not only in the capital, but also in rural areas. By 2014, 5,400 km of roads connecting Ulaanbaatar with the aim centers had been paved, and a further 13,000 km are to be paved by 2020, but Mongolia is dependent on foreign donors for all major infrastructure projects.

In 2015, Russia, China and Mongolia reached an agreement to create common trade routes.

In order to utilize Mongolia’s huge raw material potential, it is important for Mongolia, but also for China, to decisively improve transport connections.

The Chinese infrastructure project of a new silk road,One-Belt-One-Road (OBOR) would offer the necessary prerequisites for this. 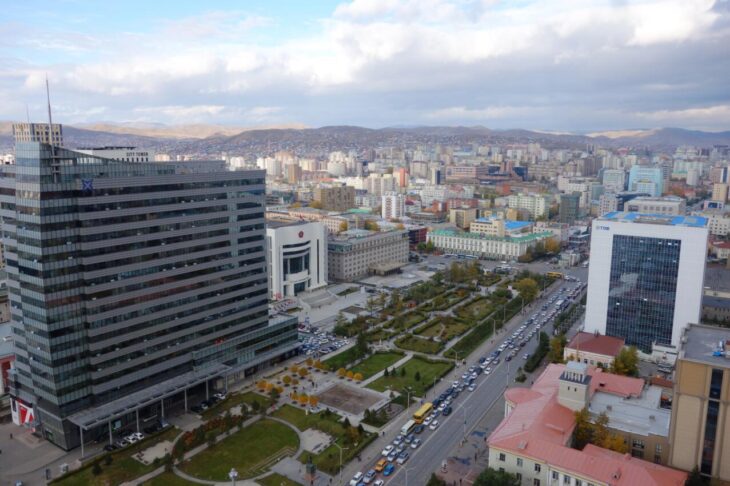