The media, especially the Internet, have nonetheless developed into a player to be taken seriously in recent years.

The Mongolians avidly use social networks such as Twitter and Facebook for comments on political events in Mongolia, less often on international events.

It is important to pay more attention to the fact that young people – not only in Mongolia, but worldwide – hardly ever get information from the print media, but almost exclusively use the electronic media and short message services.

Most of the print media, television and radio stations and their associated websites are privately owned. The owners are close to the political parties, if not part of their leadership.

The director of the Mongolian Press Institute, Dr. M. Munkhmandakh, presented the results of a study on the media landscape in Mongolia on June 22, 2017.

After that, the country had 101 newspapers, 86 magazines and brochures, 69 radio, 131 television stations, and 98 websites that appear regularly.

The quality of reporting and the training of journalists have improved considerably over the past 15 years. However, there is a lack of transparency of ownership in the media.

The training and further education of journalists has also improved through closer international cooperation, multilateral and bilateral workshops, lectures, etc. The endeavor to achieve more objective and comprehensive coverage in the political media is clearly evident.

Nevertheless, a broad, politically informed public in Mongolia can only be assumed to a limited extent. Press products are not very widespread, especially in rural regions and among the poorer sections of the population. Moreover, only state television can be received in rural areas.

Influential media are: ” Montsame “, the national news agency with services in English, Russian, Japanese and Chinese, the national television radio, the daily newspapers “Udriin Sonin”, “Unuudur”, “Zuuny Medee”, “Unen” and “Mongolyn” Medee “- all with extensive websites and to be found on Facebook.

Unfortunately, most of them do not have English editions.

In addition, there are now numerous websites, some in English, with information about the country and local news such as ikon.mn, 24tsag.mn, gogo.mn, medee.mn, news.mn, mongolpost.mn or the Mongolian mining journal.

In connection with election reporting, it was criticized that articles about the female candidates took up only a small amount of space, which would have decreased further after the start of official election advertising on June 11, 2016.

In addition, there is a sensitive gap between carefully researched, balanced background reports in favor of mere PR texts. 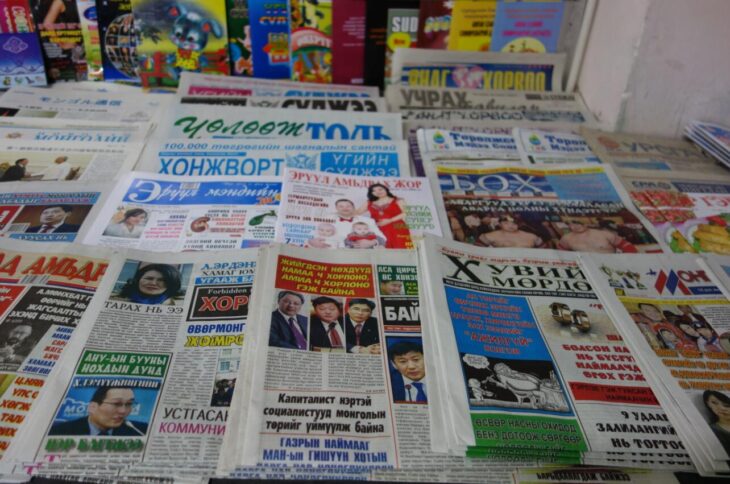 While the number of traditional media has steadily declined in the five years up to 2017, the statistics recorded an increase of 14 in 2018.

There were three percent more printed newspapers and magazines and newspaper sales also developed positively, the number of magazines sold is however, decreased by seven percent.

At the beginning of 2019, 109 online information portals were regularly operated, nine more than in 2018.

50 percent of the traditional media (newspapers, magazines, radio and television) have their own websites.

The online portals, especially their own Facebook pages, played an increasingly important role in switching news and advertising quickly.

The telecommunications and Internet market Mongolia has grown steadily over the past five years. Growth will accelerate even further until 2023.

The government program “Mongolia in the Internet Age” plans to train specialists in artificial intelligence, program and app developers, automated work processes and information security by 2027.

The Korean KT Corporation has meanwhile sold its 40 percent stake in Telecom Mongollia to the Mongolian state.

The Mongolian Telecom is 54 percent owned by the state. The Mongolian-Japanese joint venture Mobicom is by far the largest mobile communications company in Mongolia. Other providers are Skytel, Unitel and G-Mobile. The cellular network in Mongolia is based on GSM.

Foreigners can easily exchange their SIM cards for those from local providers.

E-mails and SMS messages are the cheapest and fastest connections between Mongolia and the world. Connections are also possible everywhere in the aimag and sum centers. However, you should always expect power failures or local and temporary power cuts.

In recent years, social networks such as Facebook and Twitter have become the most frequently used means of communication in Mongolia.

However, data protectionists, education and cultural politicians complain about the largely uncritical use and the transmission of a large amount of sensitive personal data without regard to data protection and privacy.

Attempts by the authorities to censor undesirable information on Mongolian websites are also criticized.

The Mongolian Post is a state-owned company with 400 branches across the country. Mailboxes outside the post offices are unknown, the mail can only be dropped here. You won’t find a mailbox in the building of Ulaanbaatar International Airport either. Letters and cards to Germany reach their recipients after two to three weeks.

However, due to the tight budget, the government is planning to sell various state-owned companies, including the post office.