The subjugation of the Mongolian principalities to the power of the emerging Manchu Empire lasted almost 150 years. First the southern principalities with the seat of the great khan Ligden (1604-1634) fell victim to them.

The aim of the expansion efforts of the Manchurians was China, the “Golden Land”, the way there led through the Mongolian territories. Here the situation had changed due to the rise of the Western Mongols (Djungars) since the beginning of the 15th century. Their rulers, descendants of one of the Chinggis-Khaan brothers, contested leadership among the Mongols against the Eastern Mongols, who were ruled by the direct descendants of Chinggis-Khaan (Chinggisids). Ligden tried to restore central power, but the rulers showed little interest, especially since Ligden had neither material nor mental means to win and retain allies. On the contrary. The Mongol princes, who felt oppressed by him, saw the Manchus as welcome allies. For the Manchu rulers, on the other hand, the Mongol princes were indispensable allies in the fight against northern China.

After Ligden Khaan’s death in 1634, the Manchus tried to legitimize their claim to leadership over the Mongols through a clever marriage policy and exploitation of the inner Mongolian rivalries. In 1644 the Manchus conquered China, expelled the Ming and named their dynasty Qing.

The terms “inner” and “outer” Mongolia come from this time, from the Middle Kingdom, in which the non-Chinese peoples were classified at best according to their distance from the Chinese mainland.

Towards the end of the 18th century, the Qing, meanwhile a refuge for stagnation, reaction and frozen rituals, came under increasing pressure. Corruption, incompetence and famine led to uprisings in China, and rebellions against the Manchus broke out repeatedly in all parts of Mongolia. The Mongolian population was falling into poverty, they had become “keepers of foreign herds”.

In the 19th century the imperialist powers (USA, Great Britain, Russia, Italy, France, Japan, Austria and Germany) forced the opening of China and its markets to the outside world.

The agony of the Qing Empire ended with the transfer of the last Manchurian emperor the Qing Pu Yi (1906-1967) to the “Forbidden City” and the proclamation of the Chinese Republic and the appointment of Sun Yatsen as the first provisional president on January 1st, 1912.

The overthrow of the Manchurian Qing took the Mongolian secular and clerical nobles as an opportunity to declare Mongolia’s independence from China. They had already sought support from Tsarist Russia in the previous months.

After lengthy treaty negotiations between the regional powers China, Japan and Russia as well as Mongolia, only internal autonomy remained of the desire for state independence. In international law, Mongolia continued to be represented by China, with Russia advancing to become the protective power over Outer Mongolia “Inner Mongolia” remained under China’s sphere of influence.

As early as December 29, 1911, a government of five ministries was formed in the capital of “Outer Mongolia” Niislel Khuree, the head of the Lamaist Church in Mongolia, the VIII. Bogd Gegeen, as Bogd-Khaan also appointed secular head.

After the victory of the October Revolution of 1917 in Russia, the Chinese rulers no longer felt bound by the contractual agreements on the status of Mongolia.In 1919, Niislel Khuree, Uliastai and Khovd were again occupied by Chinese troops, which were finally occupied by the Japanese in February 1921 Mercenary units in the service of the White Guard Baltic German Baron von Ungern-Sternbergwere expelled from Niislel Khuree. Initially welcomed by the Mongols and the Bogd Khan as liberators – Ungern-Sternberg had reinstated the Bogd-Khan government – Ungern-Sternberg’s regime of terror met with resistance not only from the members of the secret circles founded in 1918/19. The aim of these circles, which included simple cattle farmers, military officials of the Bogd government, lamas and nobles, was to establish Mongolia’s independence, to free the country from foreign invaders and to improve the living conditions of the Mongols. S. Danzan (1885-1924), D. Bodoo (1885-1922), Kh. Choibalsan (1895-1952) and D. Sukhbaatar (1893-1923) were co-founders of these circles.

They quickly came under the influence of the Far East Secretariat of the Comintern in Irkutsk and the Bolshevik Party. From 01.-03. March 1921, members of the secret circle, which they renamed the Mongolian People’s Party in June 1920, met in Deed Shivee (Kjachta, Troitskosavsk) for deliberations with the Bolsheviks about the fight against the advance of the “Bloody Baron” von Ungern-Sternberg. This consultation later went down in history as the 1st Congress of the Mongolian People’s Party (MVP). On March 13, a Provisional Mongolian People’s Government was formed. Mongolian partisan detachments under D. Sukhbaatar liberated Kjachta from Chinese troops on March 18 (with the active help of Russian military advisers!) And marched in the direction Niislel Khuree, which the joint associations of Mongols and Red Army soldiers reached on July 6th.

On July 9th, the People’s Provisional Government called on the Bogd Khan government to resign and surrender power. On July 10th, the Bogd and his ministers officially handed over their offices and the people’s government took power.

On July 11th the victory of the People’s Revolution was proclaimed and the VIII. Jabzundamba Khutagt as Bogd Gegeen was elevated to head of state with limited powers. To push him aside completely did not seem wise even to the Russian advisors, the Lamaist belief and the veneration for the Bogd in the people were too deep, even among many members of the MVP. 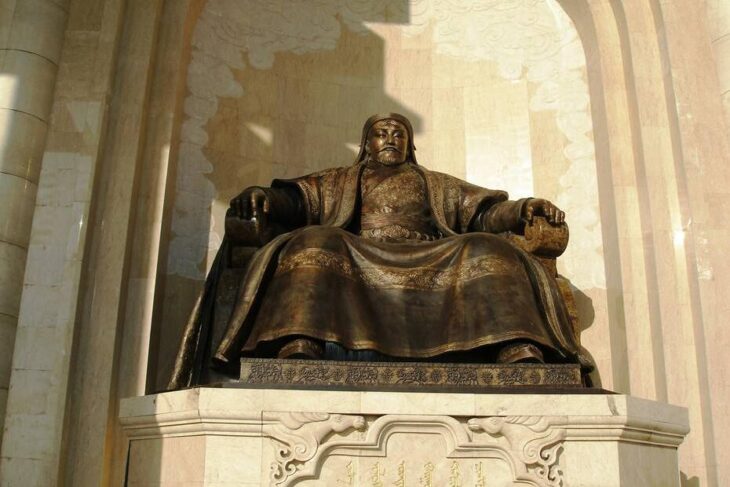 Under the conditions of a constitutional monarchy, the people’s government under the leadership of the MVP, which in the early years still included representatives of the secular and clerical nobility, decided on measures to drive out the remnants of the White Guard troops, canceled all debts to foreign companies, and abolished bondage and serfdom. On August 22nd, Mongolian soldiers arrested Nikolaus Roman von Ungern-Sternberg and handed him over to the Russians, who executed him after a short trial. The Mongolian Youth Association was founded on August 25, a public education department was set up at the Interior Ministry in December and the first friendship treaty between Mongolia and the Soviet Union was signed. On June 2, 1922, the Soviet Foreign Minister received MI

In 1923, Mongolia’s first middle school opened its doors to 100 students, including some girls. They came from the Ger primary schools founded in 1921 in the capital and from the monastery schools. From the primary school classes of the aimags only five pupils had made the admission.

In May 1924, the VIII. Bogd Gegeen died. The enthronement of the IX. was thwarted by the Russians, the way to the establishment of a people’s republic was clear.

On the III. At the MVP party congress in August, the delegates decided not only to rename the party to the Mongolian People’s Revolutionary Party (MRVP) and to convene the first state assembly, but also to make a direct transition from a feudalist to a socialist social order. Under pressure from the Comintern observers present, the party chairman and finance minister S. Danzan, who was against the rapid adoption of the Soviet regime for Mongolia, was removed from his office, arrested for pro-capitalist, pro-Chinese activities and after a short trial was executed. Davaa, who represented Mongolian interests in Moscow and was also unwilling to submit to the Comintern, was replaced by the more willing Japon Danzan.

The 1st Grand State Assembly met from November 8th to 28th, 1924 in Niislel Khuree. 77 delegates, including six members of the aristocracy, debated the future of Outer Mongolia. Greetings were given not only by Soviet, but also by envoys from the Buryats, Kazakhs, Tibetans, Ordos and Barga Mongols.

Foreign Minister A. Amar said that the Mongolian People’s Government wanted to establish official relations with the Sun Yatsen government in China and also maintain good relations with the Mongol peoples in Russia and China. The Mongols of Inner Mongolia, Barga and Khukh Nuur should be able to live in freedom. Amar advocated accepting the Kazakhs and Uriankhai as citizens of Outer Mongolia. This was apparently intended to ease the situation in the People’s Republic of Tannu-Tuva. Anti-Bolshevik riots broke out here at the beginning of the year.

On November 26th, the delegates approved the constitution drawn up by a Mongolian-Soviet commission, which stated at the beginning that “the entire Mongolian state is from now on a sovereign Mongolian People’s Republic”.