The predominant religion in Mongolia is Tibetan Buddhism.

According to the 2020 census, 59.4 percent of the population over the age of 15 describe themselves as religious.

According to thereligionfaqs, 53 percent of them profess Tibetan Buddhism (Lamaism), three percent are Muslims, 2.9 percent followers of shamanism and 2.2 percent are Christians, most of them Protestants, others profess the Russian Orthodox Church, the Seven Day Adventists or the Catholic Church.

Religious thinking began in Mongolia, like everywhere else in the world, with ideas of the soulfulness of all natural phenomena (animism), which found expression in belief in demons, necromancy and ancestor cult.

The following form of religion was shamanism (mong. Buu murgul). The shaman comes into contact with the supersensible world for the benefit of the community. Shamanism is based on the belief in numerous animal and human-shaped spirits, from whom the shamans ask for help and guidance in specific life situations (illness, hunting, weather, war). The spirits are appeased through offerings. 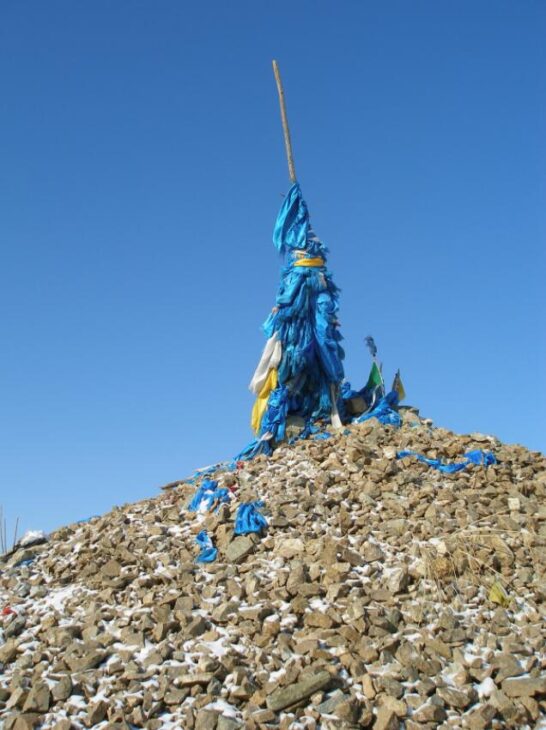 The founder of Buddhism Gautama from the Indian Shakyas (564 BC-480 BC) did not want to be a savior, a god or the earthly embodiment of a god who punishes and rewards, but a guide, a teacher (Sanskrit “Guru”, Tibetan “Lama”) on the way to nirvana.

The Tibetan form of Buddhism, Lamaism – a term that the XIV Dalai Lama does not appreciate very much – first found its way into Mongolia in the 12th century when Great Khan Khubilai and the Tibetan Phagspa Lama (1237- 1280) agreed on the separation of powers between secular and spiritual power. The expulsion of the Mongols from China (1368) initially prevented further conversion of the Mongols to Buddhism.

That was only to be achieved with lasting success almost 200 years later. Until 1921 Mongolia was a theocratic state, the central authority religiously legitimized.

First in southern Mongolia, later also in northern or Khalkh or Outer Mongolia, first the princes (khans), then the other nobles and cattle farmers, turned to the new religion. In 1588 the first Lamaist monastery in Khalkh Mongolia – Erdene Zuu – was built in the immediate vicinity of the old capital Karakorum. The monasteries soon developed into centers of economic, political, cultural and scientific life in Mongolia.

Buddhism is a reincarnation religion, the system goes back to the 13th century.

It was the virtue or yellow hat sect that prevailed in Mongolia. At the top of the hierarchy of the Lamaist Church is the Dalai Lama, based in Lhasa (exile in India since 1959), followed by the Panchen Lama based in Beijing. In third place was the Jabzundamba Khutagt in Niislel Khuree until 1924, and Ulaanbaatar since 1924. With the death of VIII. Bogd Gegeen in May 1924, the line ended for the time being, the enthronement of IX. Bogd was banned.

In Mongolia, too, the new high religion did not succeed in completely eradicating the elements of the previous popular religions. The “white old man” (Tsagaan Uvgun), the shamanistic protector of the herds of cattle and the earth spirits, made it into the Lamaistic pantheon (totality of the gods of a religion).

The ban on the construction of ovoos – piles of stones adorned with khadags in honor of guardian spirits – also failed to prevail.

The Lamaist mask dances (Tsam) have been performed in Mongolia since the 18th century. Of the two types of Tsam – “Dialog-Tsam” according to the Tibetan poet and hermit Milaräba (1040-1123) and pantomime dance, pantomime dance has established itself in Mongolia. Probably also because the high lamas and nobles did not tolerate the socially critical approach in speaking dance.

Most common in Mongolia is the Khuree-Tsam or the Erleg-Nomonkhan-Tsam. A maximum of 108 masks of 21 deities (Ochirvaani, Jamtsran, Gongor, Namsrai, etc.) are used, as well as numerous legendary figures and legendary animals (Garuda, lion, deer). Every major monastery in Mongolia follows its own traditions and local variations in this religious pantomimentance. It is the same everywhere, however, that the “white old man” is particularly popular with the Mongols. The tsam dance is intended to help ward off evil spirits, suffering and hardship from the individual and the whole country, to protect religion and to bring its adversaries to ruin.

The last tsam dance was performed in Ulaanbaatar in 1937. After that it was banned until the political change in 1989. In 1991 it experienced its renaissance. Now the lamas in the larger monasteries perform the very elaborate dances every two years. Still a spectacular event not only for tourists.