According to the 1992 constitution, Mongolia enjoys freedom of religion.

Buddhism / Lamaism never really ceased to be part of the Mongolian national identity, even during the socialist period. There were places of worship everywhere that the local population visited more or less secretly. Since 1944 the Gandan monastery was able to officially work again.

During the Stalinist repression in the 1930’s, most of the 750 monasteries and temples with valuable written documents and sculptures were destroyed.

Probably 30,000 people – exact figures are not available – fell victim to the Stalinist “purges”, including many members of the lower and higher clergy. Only a few years ago, construction workers discovered a mass grave near the Gandan monastery containing the remains of hundreds of lamas.

In the past 20 years around 160 of the monasteries destroyed during the “dark” 30’s “have been rebuilt, new ones have been added. 3,000 lamas of various levels are serving in the monasteries and temples. The college of Buddhist art at Gandan monastery enjoys also has a good reputation outside of Mongolia. The head lama of the D. Choijamts monastery was elected to the Asian Buddhist Peace Conference in 2003. Erdene Zuu is both a religious museum and place of faith. The monastery is now active again care for.

After the fall of the Wall there were various attempts to reinstate a Jabzundamba Khutagts as the spiritual head of the Lamaist Church in Mongolia. In fact, this function is exercised by the Khamba Lama (abbot) of the Gandan monastery D. Choijamts (born 1951).

After the death of VIII Bogd Gegeen, who was also the secular head of Mongolia since 1911, Soviet Russia prevented the enthronement of a successor.

It was not until 2010 that the 9th reincarnation of Bogd Javzundamba Khuatagt Jambalnamdolchoijijantsan, who was born and living in India, was granted Mongolian citizenship. Jambal moved to Mongolia, but was already marked by illness. He died on the night of February 29th to March 1st, 2012.

According to thesciencetutor, Mongolian history and culture, Mongolian customs and traditions are inextricably linked with Buddhist teaching and the Enlightened Saints (Bogd Gegeen) have made an important contribution to the unity and independence of the Mongolian people. The statements from the Gandan monastery range from the appointment of I. Jabzundamba Khutagt Undur Gegeen Zanabazar from the Golden Family of Chinggis-Khaan in 1639 to the VIII. Jabzundamba Khutagt, who led the independence movement against China in 1911 and on December 29, 1911 was also chosen as the secular head of the new Mongolian state. After his death in May 1924, the Mongolian People’s Party, which had ruled since 1921, decided to abolish the constitutional monarchy, instead to establish a people’s republic. During the “dark period of Stalinist repression” most of the 750 monasteries were destroyed and lamas who refused to renounce their beliefs were murdered. Buddhism / Lamaism in Mongolia only experienced its resurrection in 1990 with the victory of the democratic revolution.

President Ts. Elbegdorj and the other heads of state expressed their deep condolences in a joint letter in view of the death of IX. Bogd stated. The Khamba Lama D. Choijamts said the Bogd had made important orders before his death. Shortly before his passing, a rainbow appeared over the monastery. The Bogd had gathered all the lamas around him and announced two important decrees: 1. His rebirth was to be found in Mongolia in order to keep the teachings of the “Yellow Religion” alive and to show the Mongols the way to happiness and contentment. He would not have been interested in political work, let his rebirth keep it as well. It should devote itself exclusively to preserving and proclaiming the doctrine. The Dalai Lama had given his consent to “finding the 10th.

To date, the X. Jabzundamba Khutagt has not been found.

Speculations that the Dalai Lama’s visit to Mongolia in November 2016 was in connection with the enthronement of X. Jabzundamba Khutagts, the informal spiritual head of the Lamaist church in Mongolia, the Khamba Lama of the Gandan monastery Choijamts, rejected.

“We look forward to the visit of the Tibetan spiritual leader and 1989 Nobel Peace Prize winners”. Immediately after his arrival in Ulaanbaatar, after having previously visited Japan, the XIV. Dalai Lama greeted his followers in front of the temple of the Bodhisattva Avalokiteshvara (Mong. Janraisag) in the Gandan monastery. On the 19th he led a seminar with Mongolian lamas, on November 20th he took part in the International Buddhism Conference in the cultural palace of the Mongolian capital and on November 21st he was awarded an honorary doctorate from the Mongolian Agricultural University. 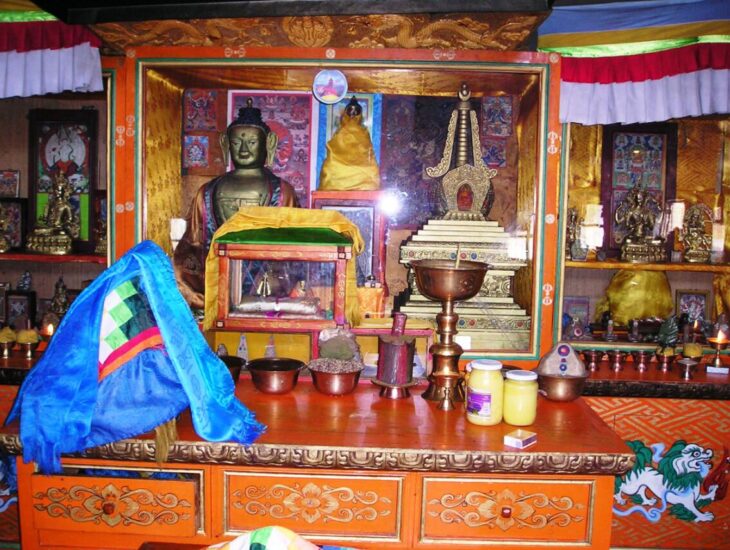 Followers of Buddhism, Islam, shamanism, Christianity and other religions or sects can celebrate their beliefs in 250 places.

The Catholics in Mongolia have access to the St. Peter and Paul Cathedral in Ulaanbaatar, the Muslims six mosques, and in 2011 a seventh was inaugurated in Ulaanbaatar.

According to the 2014 Statistical Yearbook, of all churches, temples and prayer places in Mongolia, 42 percent are dedicated to Buddhism, 48.8 percent to Christianity, 7.4 percent to Islam and 1.8 percent to other beliefs (shamanism, Bahai, Muun).