In contrast to the previous elections and the 2020 election, the members of the Aimags (Provinces) and City Councils’ assemblies were elected on June 29, 2016 together with the members of the Grand State Assembly, 2,288 candidates had competed for the seats in the Aimag Assemblies and advertised in the Ulaanbaatar City Council. Eleven of the 45 seats in the city council went to the DP, 34 to the MVP. 20 of the 21 aimags also went to the MVP. Only in the Zavkhan Aimag was the DP able to secure a majority with 24 of 41 mandates. Ten women were members of the city council, and the turnout was 70.4 percent, or 689,000 of the 844,000 eligible voters. One of the first acts of the new Ulaanbaatar City Council in 2016 was to cancel its predecessor’s 2013 decision to rename Sukhbaatar Square to Chinggis Khaan Square. It is now officially called Sukhbaatarplatz again. At the 11th session of the Ulaanbaatar city council on September 22, 2017, the chairman of the city council, Ts. Sandui, who was elected just a few weeks ago, was officially relieved of his post because of his involvement in the scandal over the “sale of government and official posts”. The MVP parliamentary group nominated D. Bayarsaikhan (head of the center for the support of small and medium-sized enterprises of the city administration), the assembled city council nominated S. Amarsaikhan, director of “Oyuny Undraa”. In a secret ballot, 17 of the 44 city councilors present voted for Bayarsaikhan and the same number for Amarsaikhan, and ten cast an empty ballot paper. In the end, a majority of the city council voted for S. Amarsaikhan. October 19, 2016 had been set as the date for the elections for the Sum and Duureg assemblies. (Duureg – Ulaanbaatar boroughs).

In 216 of 331 sums the MVP won the majority of the seats, in 103 the DP and in eleven an electoral alliance made up of DP and MRVP. In Ulaanbaatar, six of the nine city districts also went to the MVP, and the DP provided the mayor in only three city districts. The DP stated that the MVP did not win the local elections because of a successful policy, but because the DP was too weak and could not resolve its internal disputes.

In the elections for the citizens’ assemblies of the Aimags, Sums and Ulaanbaatar districts as well as the Ulaanbaatar city council on October 15, 2020, the MVP won in 13 of the 21 aimags, the DP in eight.

In addition, the MVP won the majority of the seats in eight of the nine city districts (Duureg), the DP won in Sukhbaatar-Duureg.

Of the 45 seats in the Ulaanbaatar city council, 34 went to the MVP, eight to the DP and three mandates were won by the National Labor Party.

According to estatelearning, 17,000 candidates from nine political parties and alliances as well as independent candidates competed for a total of 8,169 seats.

At the first meeting of the Ulaanbaatar City Council on October 23, 2020, D. Sumyabazar (MVP), former Minister for Mining and Heavy Industry, was elected mayor with 71 percent of the vote.

He had previously given back his seat in the Grand State Assembly.

J. Batbayasgalan was elected chairman of the city council. 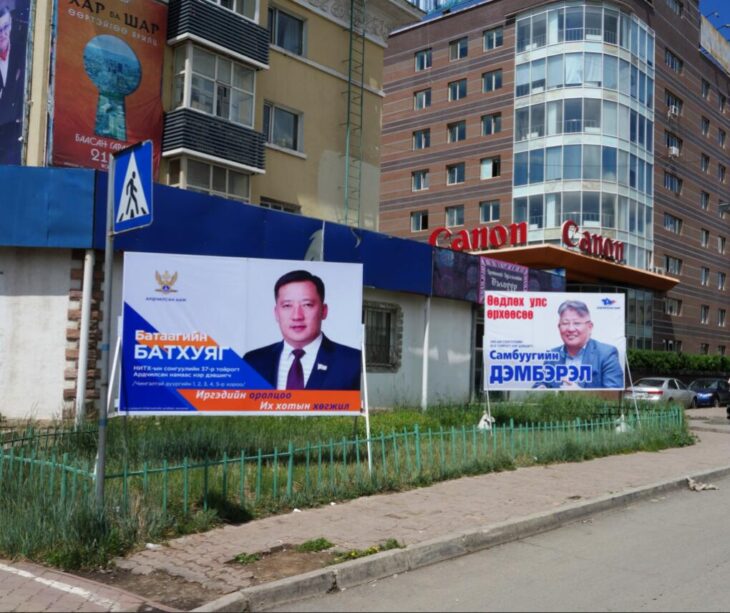 Incumbent Ts. Elbegdorj could not run again after two terms.

The sole ruling MVP had nominated its party leader and chairman of the Grand State Assembly Miyeegombyn Enkhbold, the DP the politician, entrepreneur and former competitive athlete Khaltmaagiin Battulga, née. 1963 and the MRVP Sainkhuugiin Ganbaatar.

Individuals and parties not represented in the State Assembly do not have the right to nominate a candidate.

The Mongols living abroad had the opportunity on June 10th and 11th to exercise their right to vote in their respective host countries.

Eligible voters – only 7,209 had registered – were able to cast their votes at embassies or other diplomatic institutions between 7 a.m. and 10 p.m. local time.

At the invitation of Foreign Minister Ts. Munkh-Orgil, an OSCE observer group started its work in Mongolia on May 22nd.

It consisted of a core team of eleven in Ulaanbaatar and 20 long-term observers who traveled across the country.

The nationwide voter turnout was over 68 percent, a very positive surprise. However, none of the candidates achieved the required majority of at least 50 percent, so that a second ballot was necessary.

The ZWK set July 7th as the date for the runoff election for president.

It was the first time in the history of the Mongolian presidential election that the winner had to be determined in a second ballot.

The MRVP had accused the ZWK of manipulating the numbers. It was not until shortly before the polling stations were closed that the share of the vote for the MVP candidate M. Enkhbold suddenly increased, so that he was able to just outstrip the MRVP candidate S. Ganbaatar.

Apparently a dispute about the right candidate had broken out in the MVP.

On July 9, the chairman of the Central Electoral Commission (ZWK) Ch. Sodnomtseren announced the preliminary final results of the 2017 presidential election.

The Mongols abroad showed little interest in the election of their head of state.

A total of 2,699 Mongolian citizens entitled to vote took part in the second ballot, 37.7 percent.

That was another 2,000 fewer than in the first ballot.

On July 10, Kh. Battulga took the oath of office as the 5th President of Mongolia in the Great Hall of the State Assembly. On July 11th he opened the Naadam celebrations in the central stadium of Ulaanbaatar.