Chinggis-Khaan once spread terror across Asia and Europe, today Mongolia is an internationally respected state and one of the fastest growing economies in the world. Between nomadic livestock farming and the market economy, between tradition and modernity, the Mongols are in the process of determining their place in the world.

Located in the heart of Asia, Mongolia is a land of extremes. Here are the northernmost deserts in the world and the southernmost permafrost areas. Three million people live in an area of 1,564,100 square kilometers. A land to get lost. Endless space and silence are fascinating just a few kilometers from the lively city of Ulaanbaatar. As a result of the Covid-19 pandemic, Mongolia has closed its borders to all tourist travel. This decision is initially valid until December 31, 2020.

According to oxfordastronomy, after 70 years of uninterrupted sole rule by the MRVP, the Mongols fought for their right to self-determination in a peaceful revolution in 1990. Today Mongolia is a parliamentary democracy with a diverse political and media landscape. Corruption and human rights violations are not always punished consistently enough.

For millennia, nomadic livestock farming was the Mongols’ only livelihood. In the 20th century, industry, agriculture and the service sector were added. Today it is mining that creates more prosperity. Since 2000 tourism has also developed into an important branch of the economy.

42% of the Mongolian population are under 25 years of age – a good prerequisite for development and positive social change. However, the poverty rate is rising again and the differences between rich and poor are growing ever greater. Mongols and Kazakhs, Buddhism and Islam coexist and coexist peacefully.

Holders of a German passport do not need a visa for a stay in Mongolia of up to 30 days. The supply of everything that is necessary for life is not a problem anywhere in the country. Vegetarians and vegans should have enough fruit and vegetables with them when traveling outside of Ulaanbaatar or the aim centers.

Major changes have taken place in Mongolian foreign trade since the beginning of the economic and political transformations.

With the rise in world market prices, raw materials now dominate exports and, due to the geographical proximity, foreign trade is concentrated in China and Russia.

In connection with the domestic and foreign mining projects, the need for investment has increased enormously and, due to the price increases for Mongolian imported goods (machines, fuels), a trade deficit has been recorded since 2007, which has steadily decreased in recent years and finally resulted in an export surplus.

Due to the lower demand for raw materials, especially coal, the volume of foreign trade decreased overall in 2015.

In 2018 Mongolia’s total foreign trade volume was almost USD 12.9 billion, of which exports accounted for just over 7 billion and imports 5.8 billion.

90% of exports, mainly copper concentrate and coal, go to China. The economy of Mongolia is therefore extremely dependent on the general economic situation in China and on world market prices for raw materials.

In the meantime, China has replaced Russia as the number one importing country. 37% of imports come from China, 26% from Russia, followed by Japan and South Korea.

Mongolia is trying to diversify its exports and is aiming to set up plants to process the local mineral resources. The successes are already visible in the light and food industry. More and more products meet international standards and the competitiveness of domestic products versus foreign products is gradually improving.

But the protests of local producers, cattle farmers and farmers against the high imports of food goods are increasing.

Germany is Mongolia’s most important trading partner in the EU, although the trade volume of the two countries still offers expansion potential.

In 2017, the total volume of trade between the two countries rose to USD 140 million, with only 10 million being exported to Germany.

Direct investments from Germany reached USD 50 million in 2017, which corresponds to a share of 0.8 percent of all foreign investments in Mongolia.

In 1995 Germany and Mongolia signed a double taxation agreement that came into force in 1996.

When Chancellor A. Merkel visited Mongolia in 2011, a raw materials partnership was concluded that is intended to bring more raw material security to the Federal Republic and sustainable economic growth to Mongolia.

The Mongolia and the EU signed in 1993 a system based on mutual benefit trade and cooperation agreement.

As part of the Generalized Scheme of Preferences (GSP +), Mongolia has been exempt from customs duties on 7,000 products for import into the EU since 2006.

In 2014 Mongolia was one of the ten countries that were accepted into the GSP + program.

In 2015, Mongolia exported 20 percent of its goods worth 16 million duty-free to the EU.

The main export goods to the EU are clothing, textiles and raw materials, mainly raw cashmere, the main import goods are machinery, chemicals and food. 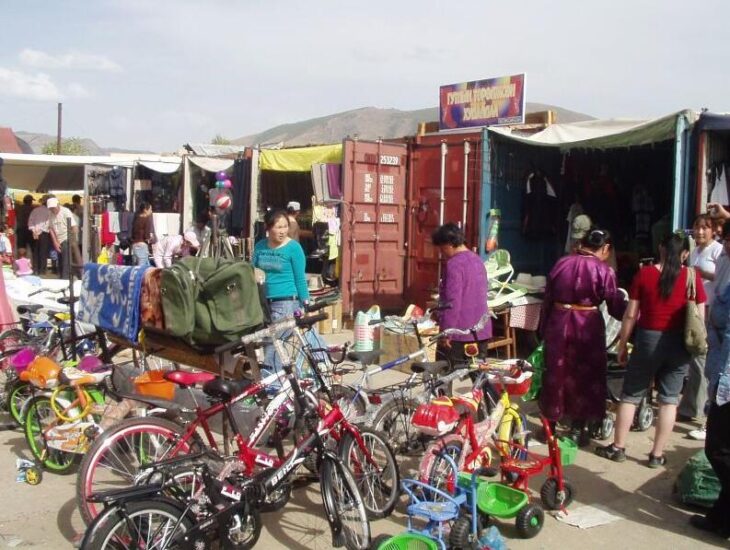