The Bahrain uprising 2011 – 2012 was a popular, non-violent uprising with demands for democratization in Bahrain. It took place from January 2011, and is also known as the Pearl Revolution. It is considered part of the Arab Spring.

It was aimed at a single system of government, with demands for democracy – and not, as in other countries where rebellion broke out, where the removal of the head of state was a major goal.

While the uprising was inspired by the demonstrations in Tunisia and Egypt, special conditions in Bahrain were recorded, where conflict between Shia and Sunnis was also a factor. Unlike in other countries with extensive uprisings, Bahrain was beaten with force.

The Bahrain uprising took place in the wake of the first Arab Spring uprisings, first in Tunisia, then in Egypt and Yemen. The demonstrations started in several cities on February 14, 2011, demanding democratization. The riot was fueled when a protester, Ali Mushaima, was killed by police on the day it started. Several thousand then attended his funeral, where a new victim fell, further fueling the protests. Bahrain’s LO responded with a general strike, and the largest opposition party, al-Wifaq, withdrew from parliament. Many of the strikers were dismissed. As in the other Arab countries where riots broke out, youth in particular were mobilized through social media. 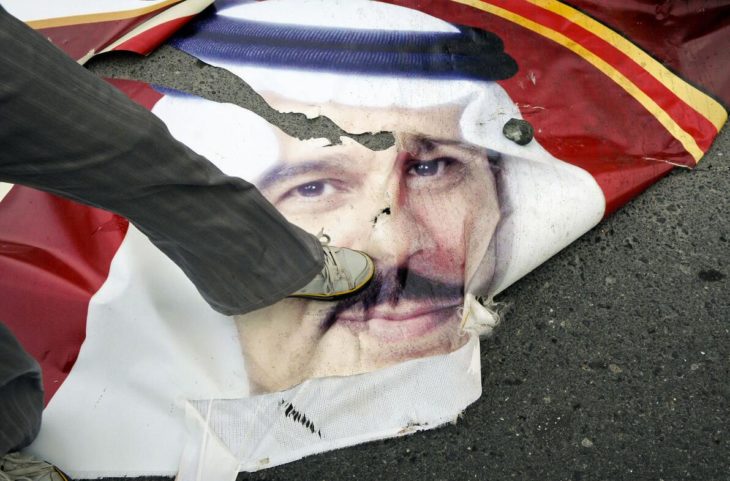 A demonstrator tramples on a torn poster of King Hamad ibn Isa al-Khalifa in Manama March 13, 2011.

Pearl Roundabout, a roundabout in Manama, became the gathering place for the rebels, similar to Tahrir Square in Cairo, and gave the rebellion the nickname of the pearl rebellion, which, however, was little used. Security forces intervened on February 17, killing three people, several injured. The opposition rejected the government’s claims that the protesters were armed, and the later commission of inquiry also found no evidence of this. The initially peaceful demonstrations were supported by several professional groups that held their own markings; youth made up a large proportion of activists. Early on, the participants in the rebellion were divided into two camps; the established and legalized opposition on the one hand, and youth and unregistered groups on the other. While the first said willing to seek a solution with the government through dialogue, the other rejected this – and confronted the authorities with demands for regime change and action. In parallel, contradictions appeared in the royal family, where Crown Prince Salman ibn Hamad al-Khalifa wanted reform, but where a tougher line, promoted by, among others, Conservative Prime Minister Khalifa ibn Salman al-Khalifa, emerged.

Early in the uprising, the Crown Prince had begun informal talks with the leading opposition group al-Wifaq; these stopped when radical groups from March 8 challenged the monarchy itself by wanting to abolish it – unlike al-Wefaq, which would reform it. Thus, the rebellion had crossed a red line, seen from the regime’s side. The royal house was also under pressure from Saudi Arabia, which has significant economic and political influence over Bahrain. The Saudi royal house feared for rapid reform in Bahrain – and for the neighboring country’s Shiites to gain an overly strong position, thereby inspiring the Saudi Shia minority.

The protests – and clashes – continued throughout February and into March, as the situation escalated, essentially as a result of increased opposition from the regime. On March 14, one month after the uprising began, the Gulf Council responded positively to Bahrain’s request for military assistance through its Peninsula Shield force. The intervention was official to guard installations in Bahrain, in fact to protect the royal family. The Council sent approx. 4,000 soldiers from Saudi Arabia, supported by naval vessels from Kuwait, and 500 police officers from the United Arab Emirates. The military support provided the king with coverage to introduce the state of emergency March 15, to launch an armed attack on Pearl Roundabout the following day, and to step up the fight against the opposition. The monument that had given the place its name – and had become a symbol of the uprising – was demolished. The king defended neighboring military intervention with the insurgency being a foreign plot, and Iran had thereby interfered with Bahrain’s internal affairs.

The main requirement made in 2011 was the preparation of a new constitution and the introduction of a constitutional monarchy that was responsible to a elected parliament with full legislative authority, as well as direct elections on Prime Minister. The opposition was thus not directed either against the monarchy as state custom or the king as head of state. However, parts of the opposition eventually called for the introduction of a republic, thus challenging the royal house – as well as the monarchies of the Gulf. Six political groups in a national alliance were behind the original demands of democracy; Among these were al-Wifaq and al-Wa’ad, who had also been central to the democracy movement a few years earlier. More uncompromising groups gathered in March in the Coalition for a Bahraini Republic, thus closing – with the demand for the introduction of the republic – the door for dialogue with the royal house. The coalition included three organizations: al-Haq, al-Wafa’a and the Bahrain Freedom Movement – all three Shia groups who had also refused to participate in the work on the Constitution in 2001. 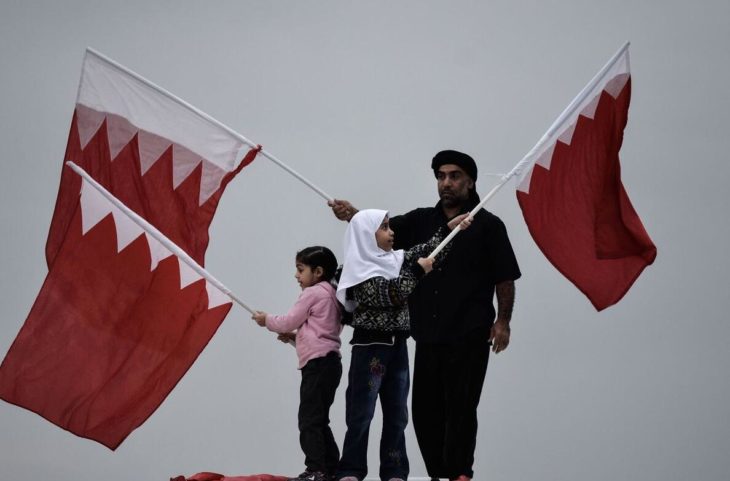 A Shiite family with Bahrain ‘s flag during a demonstration against state authorities in the capital Manama on December 28, 2012. The Shi’ites constitute the majority of the population of Bahrain, but feel discriminated against.

In the aftermath of the uprising, the criticism was dealt with internationally, including from Bahrain’s allied US, in June 2011, King Hamad set up an independent commission of inquiry to investigate what had happened. With international experts as members, the Bahrain Independent Commission of Inquiry (BICI) presented its report in November of that year. It revealed that 46 people had been killed and recorded 559 allegations of torture – and that five deaths resulted from torture; more than 1,600 people had been arrested and over 4,000 cases of dismissal as a result of participation in the rebellion were noted. Most of the arrested and dismissed were Shi’ites. The BICI found no basis for the allegations that Iran had been involved in the uprising. The Commission criticized the use of force by the regime and its security apparatus, and extensive human rights violations. The report made several recommendations, and the king promised in the wake of the submission of several reforms.

In January 2012, the government presented a reform agenda, in which, among other things, layoffs would return their jobs. However, in April 2012, the human rights organization Human Rights Watch reported that police use of torture continued; Later in the year, Amnesty International criticized the government for renewed repression and failed to follow up on its promises of reform. According to the Bahrain Center for Human Rights (BCHR), 34 people lost their lives in the first five months after BICI presented its report. Opponents also organized demonstrations in 2012. In December, Crown Prince Salman ibn Hamad ibn Isa al-Khalifah invited the opposition to dialogue to get out of a locked situation.

The main reason for the rebellion in Bahrain was the desire for a democratic system of government, also as a basis for meeting contradictions between the country’s Shi’a majority and Sunni minorities, the latter having the dominant position in society, including the near monarchical royal house.

The Shiites were considered by the regime as a possible fifth column, and subjected to political and economic discrimination. Although the Bahrain conflict therefore received an element of sectarian contradictions, it was as much a struggle for political rights and social relations – with opposition to an elite, including the royal family al-Khalifa (Sunni), which has retained widespread power. While Shi’ites and Sunnis joined in on political reform at the start of the uprising, Shi’as have always led to the demands, and the conflict has helped to intensify the contradictions in Bahraini society.

The Bahraini uprising gathered large sections of society, across sectarian and social divisions, and up to a quarter of the country’s population participated in the largest of the demonstrations. Political parties and independent organizations, including the trade union movement, took part in the uprising, where youth – as in the other countries during the Arab Spring – played a key role in mobilizing the people.

Unlike in Tunisia and partly Egypt, the military became an active player in the uprising in Bahrain, by being deployed early on the demonstrations. And as during the Libya uprising, foreign players were directly drawn in then, the regional Gulf Cooperation Organization deployed military forces to fight the uprising.

The rebellion in Bahrain, unlike in other countries, was brutally abolished and produced less in the form of direct results. An attempt at political dialogue in the wake of the uprising and subsequent independent investigations did not immediately proceed, and new clashes took place in 2012–2013.