According to the news that has come down to us, certainly the first Europeans to land on this island were, in July 1521, the Magellan crews, who arrived there after his death in the Philippines. Other Portuguese navigators, traveling later towards the Moluccas, they skirted the island and then again the Spanish ones. After them came the Dutch and the British.
An Italian monk, Antonio Ventimiglia from Palermo, did not limit himself to the coast of the island but also penetrated the interior and died there in 1691.

But who started the real expeditions for exploration purposes, were the Dutch in the nineteenth century. One of them, Major Georg Muller, in 1825 explored the eastern part, then following the course of the Bungau river to the mountain range that still bears his name, he entered the interior and here, together with all the components of his expedition, was killed by the natives.
Throughout the nineteenth century explorations followed one another and there was a continuous alternation between the taking of possession of the Dutch and the English.

This immense island, the third largest in the world, does not have its own history, precisely because of this coming and going of explorers. For a time it was also in the hands of the Chinese who founded their own state and exploited the gold mines. That was a period of anarchy and misery which however ended after 1850 when the Dutch decided to intervene energetically to domesticate the Chinese who still in the period 1914-15 tried to rebel.

According to Abbreviationfinder, an acronym site which also features history of Brunei, Borneo is divided into sultanates, the main ones being: Brunei, Bandjermasin, Sambas, Pontianak and Kotei.

BRUNEI: was sold by the sultan to the British North Borneo Company. In 1880 it passed under English protectorate and from 1906, by treaty, it was submitted to the administration of a British resident –

BANDJERMASIN: always important for the trades of the Dutch to which half of the territory went in 1823/25. Later in 1859 the sultanate was incorporated into the Dutch possessions –

PONTIANAK: founded by a pirate, Arab merchant, Sharif Abd ar-Rahman, in 1772 he was entrusted, by convention, to the Dutch Company which kept him employed –

SAMBAS: founded by Malaysians, passed with a commercial agreement to the Dutch Company, and then again under a Muslim dynasty –

KOTEI: on the east coast and until the 19th century autonomous, then passed under the Dutch government –

The Japanese landed on the island during the Second World War, between the end of 1941 and the beginning of 1942. They occupied almost all the territory, except for the sultanate of Brunei and the area of ​​Balikpapan, in Dutch Borneo, and remained there until the end, when they were defeated by the Americans.

Many changes occurred after the war in the British part of Borneo. The island of Labuan, the first organ in its own right, joined the administration of Northern Borneo which in July 1946 passed to the British Crown. In May 1946 the Sultan of Sarawak had already sold his sultanate to Great Britain in exchange for an annuity. This decision found a majority that was just enough to be approved in the sultanate council. The mere arrangement of the Brunei sultanate did not change. The Dutch part of Borneo, however, made up of 6 “daerak”, or autonomous territories, went to be part of the United States of Indonesia. Those who were formed from the beginning were 4:
1) – Kalimantan Barat, western, with capital Pontianak –
2) – Kalimantan Timoer, eastern, seat of the “Samarinda” Council –
3) – Borneo Tenggara, south-eastern, seat of the “Kota-Baru” Council –
4) – Gran Dajak, or Dajak Besar –

And without changes over the entire territory, a decade passed. Instead in the British part on September 29, 1959 the first Constitution of Brunei was promulgated and a new agreement was stipulated between Great Britain and the sultanate. With this agreement, Britain undertook to maintain its administrative and territorial defense duties. As with the other states included in the British Commonwealth, the resident was also replaced here by a “High Commissioner”.

Two Councils were created, one executive chaired by the sultan and one legislative chaired by a premier called “Mantri Besar”, appointed by the sultan. A third, private council dealt with constitutional issues to be brought before a court where at least one of the members belonged to one of the Commonwealth states itself. The official religion was Muslim and the official language Malay, still for some time flanked by English. As was the case with other countries in Southeast Asia, Borneo-Brunei also benefited from the Colombo Plan for economic development.

Brunei remained under the British protectorate until the end of 1963 while enjoying wide autonomy. He never adhered to the proposal to join the Federation of Malaysia because, having enormous natural resources, especially related to oil wells, the country’s limited “elite” could count on very high incomes. Still for a long time, therefore, it maintained this status and only afterwards, in 1978, did the beginning of decolonization, that is when an agreement was signed which provided for the end of the protectorate by the end of 1983. And in fact on January 1st 1984 Brunei was sovereign and independent.

He immediately entered the British Commonwealth and the United Nations as such. The World Bank immediately included it among the high-income countries, at the same level as all the oil-exporting countries of the Arabian Gulf.

Previously, however, and precisely in 1963, due to his repeated intention not to enter the Federation of Malaysia, Brunei had to undergo an armed revolt led by the People’s Party that the sultan, Ali Saiffudin, declared outlaw, after declaring him state of emergency. In October 1967 the sultan abdicated in favor of his son Hassanal Bolkiah.

In 1971 a further agreement was signed with Great Britain which granted the country full autonomy for internal affairs. Then the United Nations ordered Britain, in 1975, to withdraw all its troops from the territory where general political elections had to be called.

In January 1979 Brunei signed an agreement with Malaysia and Indonesia which undertook to respect his sovereignty. And when, on January 1, 1984, independence was proclaimed, the sultan, in addition to being appointed prime minister, was also in charge of finance and the interior.

Then in February 1988 the sultan dissolved the Brunei National Democratic Party, guilty only of having asked him for the abolition of the state of emergency which had lasted 26 years, and then governed with an absolutist regime without any democratic concession. 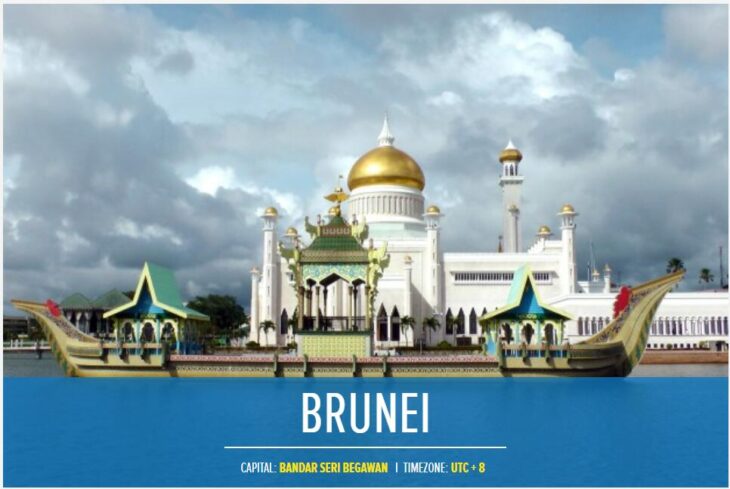 In the early nineties there was a sharp rise in unemployment, especially youth unemployment, with relative social unease. The sultan strengthened the Islamic footprint of his regime, forbade the entry into the country of spirits, favored the emigration of the Chinese who, although without citizenship and therefore social assistance, represented the majority in the white collar sector.

In 1992, on the occasion of the 25th anniversary of his reign, the sultan, disappointing all those who hoped for a softening of the regime, instead gave a crackdown on the Islamic state, and strengthened the leading role of the monarchy and the royal family.

For foreign policy, Brunei consolidated relations with other Southeast Asian countries, especially with Singapore, an important commercial partner, from which he drew highly skilled workforce. Also in 1992 he joined the non-aligned countries and the following year he entered into diplomatic relations with Russia, popular China, Vietnam and Burma. In 1995 he became a member of the International Monetary Fund.