South America is around 18 million km². About 381 million South Americans live on the continent, which corresponds to 5.8 percent of the world population. The name America (Latin America) is derived from the first name of the Italian navigator Amerigo Vespucci, who explored large parts of the South American east coast. The German cartographer Martin Waldseemüller named the continent on his world map from 1507 for the first time “America”, parallel to Asia and Europe the feminine form of the Latinized first name.

The flag was officially introduced in 1836 but has its origins from 1806. Yellow and red are the colors of the former motherland of Spain. Blue stands for the separating sea, marked freedom and independence. The stars correspond to the country’s eight provinces.

The flag was introduced in 1830. The alternating white and blue stripes represent the nine provinces that existed at that time. The sun, with human features, was originally a symbol of revolution but now stands for the country’s freedom and independence.

The flag was officially established in 1975. In the color symbol, red has been declared to stand for success in the fight for a better life, green for the country’s fertility, white for freedom and justice; these three colors also correspond to the three largest political parties. The yellow five-pointed star denotes the five ethnic groups’ shared belief in a “golden future”.

The flag was officially established in 1825. The original version (1820) is considered to have been composed by the freedom leader José de San Martín, who was inspired by the coloring of the flamingo bird’s plumage. Variants with a centralized weapon are also available.

The flag was established in 1842 but began to be used as early as 1812. The color scheme seems to be inspired by the French tricolor. The flag is original in that the pages are not identical; the backside has in the white middle field the coat of arms, from the side the finance ministry seal image.

The flag was officially established in 1966. The design is called “The Golden Arrowhead” and has the following color symbolism: red-black residents’ determination, yellow mineral resources, green forests and agriculture, the narrow white-stripe rivers.

The flag, originating from the liberation in 1825, got its present design in 1851 and was officially established in 1888. The color symbolism stands red for the Bolivian soldier’s bravery, yellow for the rich mineral resources and green for nature. 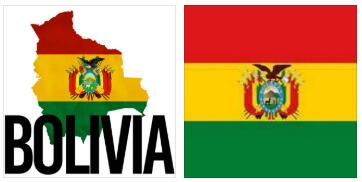 The flag was officially adopted in 1900 but had been in use since 1860. The yellow-blue-red colors have tradition from the struggle for liberation from Spain and were included in the flag adopted by Gran Colombia in 1822 (Colombia, Ecuador and Venezuela). The flag cloth is identical to Colombia’s but has a more narrow design. In the color symbol, yellow stands for the sun, blue for the sky, the sea and the rivers of the country, red for the blood of the freedom struggle.

The flag was officially established in 1861. The origin is the flag adopted in 1822 by Greater Colombia (Colombia, Ecuador, Venezuela, Panama) and whose colors were used in the struggle for liberation from Spain. The color symbol was yellow for “golden America”, blue for the sea, red for “bloody Spain”. In a later interpretation, the colors have also been said to denote the country’s three ethnic groups: white, black and Afro-Colombian. During the years 1834–61, the flag’s color field was vertically set.

The flag was officially established in 1817. It is reminiscent of the United States flag in terms of color and pattern. The explanation is that it was composed by an American officer, Charles Wood, in voluntary service in Chile’s army. The colors also have a tradition from the country’s indigenous people, the Araucans, who carried blue-white-red sharpness. In a recent symbolic interpretation, the white field stands for the Andes’ snow, the blue for the sky and the red for the blood victims of the freedom struggle. The star is seen as a symbol of the future.

The model for the flag of 1822. In the middle of the canvas was then the imperial weapon, 1889 replaced with a globe showing the southern starry sky; the number of stars corresponds to the states of the country. Green and yellow are traditionally Brazil’s colors where green represents the country’s primeval forests and yellow for its mineral resources. The pattern with a rhombus was taken from French regiment tabs during the Napoleonic period.

The origin of the flag is a blue-white cockard, which in 1810 became a sign of recognition for the independence movement. The flag was introduced in 1812 and was officially established in 1816. The sun in the white midfield previously only appeared on the war flag, but since 1996 it is also on the state and trade flag, respectively. El Sol de Mayo (the ‘corn sun’) symbolizes national day 25 May (the anniversary of the 1810 revolution). 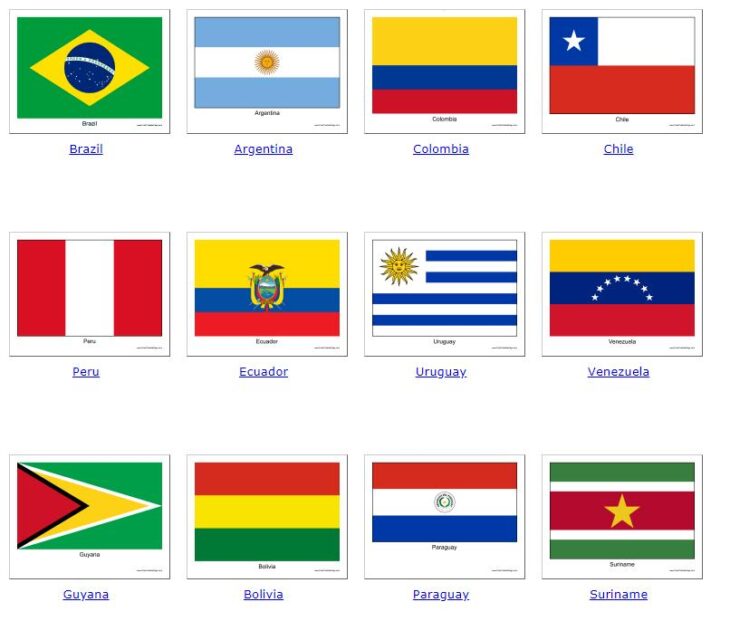