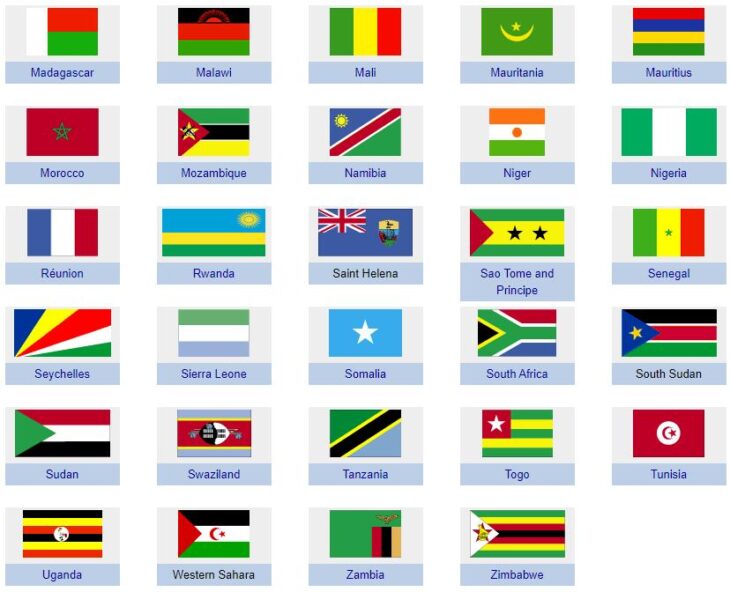 The flag was officially established in 1964. It is a combination of the flags of Tanganyika and Zanzibar. In the color symbol, green stands for agriculture, yellow for mineral resources, black for the population and blue for the sea outside.

The flag is from 1959. It is similar to the tricolors of the former motherland of France but with the difference that the white center field has changed to yellow. The colors thus constitute a compilation of French (blue, red) and pan-African (yellow, red). In the symbolism, blue stands for heaven and sea, yellow for the sun and deserts in the north, red for the victims of the freedom struggle and the nation’s progress.

The flag was set in 1960. Green-yellow-red are the Pan-African colors. At the same time, green stands for the future and the agricultural industry, yellow for mining (phosphates) and red for the victims of the freedom struggle. The white star symbolizes pure intent and consensus. The length of the canvas corresponds to the country’s five regions.

The flag dates from 1835 and is designed with the Turkish flag as a model. Since the Ottoman Empire’s rule over the country ceased, the crescent moon with the star is a common Islamic mark. The white globe represents the sun.

The flag was officially established in 1962. In the color symbol, black stands for the country’s population and Africa as a whole, yellow for the sun, red for the brotherhood of humanity. The bird in the white round midfield is a crown crane, the country’s national symbol.

The flag, which has an unofficial character, has been in use since 1976. It is in principle consistent with the flag of the PLO; the only difference is that Islam’s red moonlight and star are placed in the white center field. The colors black-white-green are panarabic colors.

The flag was officially established in 1964. The eagle symbolizes freedom, the green color of the country’s forests, orange its copper deposits, black its population and red the blood of the freedom struggle.

The flag, originally the nationalist movement’s flag, became the official national flag in 1980. In the color symbolism green stands for agriculture and vegetation, yellow for mineral resources, red for the victims of the freedom struggle and black for the majority of the population; Green-yellow-red are at the same time traditional Pan-African colors. The white wedge-shaped field symbolizes the white minority, the red five-pointed star internationalism, the bird (a soapstone sculpture) the country’s ancient culture.

The flag was officially put into operation in 1960. The green fields symbolize agriculture, the country’s main industry. The white center field stands for peace, consensus and unity.

The flag was adopted from 1 January 2002. It is a tricolor with horizontal fields as follows:

The upper field is blue, symbolizing peace and prosperity for the people of Rwanda; inset in the right part a rising yellow sun, which stands for public education and national unity. The midfield is yellow, symbolizing economic growth and development in general. The lower field is green, which represents the country’s natural resources and the value of thoughtful work.

The flag was adopted at independence in 1975. The colors are traditionally Pan-African; in national interpretation, red represents the victims of the freedom struggle, green for the vegetation and yellow for the export product cocoa. The two black stars symbolize the islands of São Tomé and Príncipe.

The flag was set at independence in 1960. Green-yellow-red are the Pan-African colors. The star symbolizes Africa’s freedom, but has really been used to separate the flag from Malis. With the location of the color fields, the flag recalls the tricolors of the former motherland of France.

The current design of the flag was established in 1996. The canvas’s five color fields are said to symbolize the young nation’s hopes for the future. The blue color symbolizes the sky and the surrounding sea, the yellow the life-giving sun, the red people’s uniform and future faith, the white social justice and the green color of the country and its nature.

According to Countryaah, Sierra Leone is a country located in west Africa. The flag of Sierra Leone was officially established at independence in 1961. Of the colors of the tricolor, green symbolizes the agricultural industry, white peace, unity and justice, and the blue sea.

The flag was established in 1983. The color scheme is based on the flag that was used in 1962 by the Frelimo freedom movement. Red stands for the victims of the liberation struggle, green for agriculture, black for the population, yellow for the mineral resources. The five-pointed star with superimposed symbolic attributes (rifle, hack, book) is taken from the coat of arms.

The flag was officially established in 1968. The color symbol, taken from the 1906 state arms, stands red for the victims of the freedom struggle, blue for the Indian Ocean, yellow for freedom and green for the country’s fertile vegetation.

The flag was introduced as early as 1959, the year before the country gained independence. The green cloth with the moonlight and a five-edged star marks the country is Islamic. In the green color, the residents also see a symbol of prosperity and hope for the future.

The flag was officially adopted in 1956 after being in use since 1915. Red is the color of the ruling dynasty. The green emblem on the canvas is a pentagram, an ancient sign of magical meaning. as a “warding off mark” against evil powers and as a symbol of religious fellowship.

The flag was officially adopted in 1961. Green-yellow-red is the traditional pan-African color constellation originating in Ethiopia’s flag. Flags similar to Malis but with the colors in different order are carried by e.g. Guinea, Cameroon and Senegal.

Without the sun in the upper field, it was used as the leading congressional party’s flag from 1953. In the color symbol, black stands for Africa, red for the victims of the freedom struggle, green for vegetation. The rising sun with 31 rays symbolizes the freedom of the African continent.

The flag was officially introduced in 1958. The colors red-white have an old tradition on the island; from 1947 they were led by the nationalist movement. They are also linked to Indonesia because large parts of the population originate from Southeast Asia. The green field represents the indigenous people.

The flag was adopted in 2011 by the Transitional Council. It is the same flag used in 1951-69. The color fields of the flag represent the regions Fezzan (red), Cyrenaika (black) and Tripolitania (green). The star and crescent represent Islam.

The flag was established in 1847 but was already used from 1827. The similarity to the US flag would like to recall that it was the United States that initiated the country’s establishment. The eleven stripes on the flag symbolize the eleven men who signed the Liberian Declaration of Independence.

The flag was established in 2006, when it replaced the flag used since 1986. In the color symbol, blue stands for rain, white for peace and green for prosperity. In the middle of the flag is a Basotho hat, which represents the country’s indigenous population.

The flag was given its current appearance in 2006. The color scheme is related to the country as such (the blue is the traditional color since 1885) and to its prosperity (the yellow color). The big five-pointed star symbolizes the unity of the country. 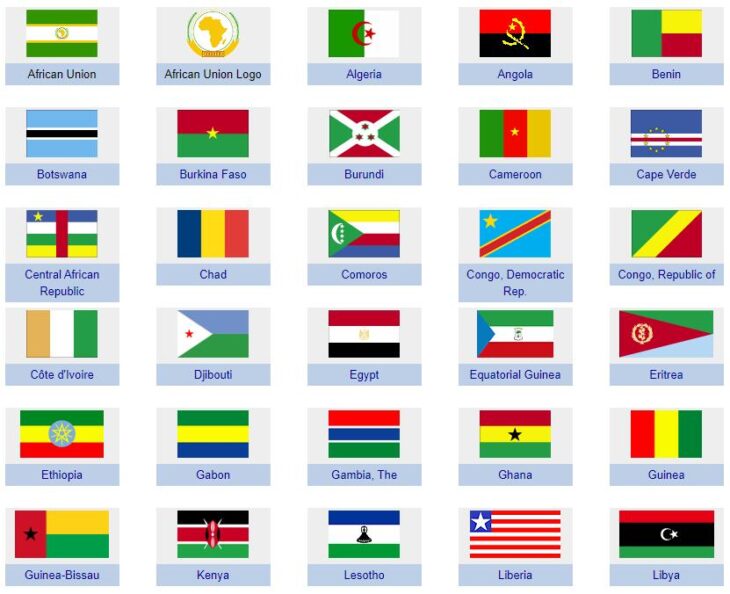