The inhabitants, the Kyrgyzstan, similar to the Kazakhs, were identified with them since ancient times, also because they share the same Turkish language. And anyway, with this name the Russians called the peoples of many different ethnic groups.

We find them already mentioned in 569 when at the court of Justin II, the grandson of Justinian emperor, some Chinese chroniclers of those times spoke of Ki-li-ki-tz peoples, stationed in the regions bathed by the main tributaries of the Jenissei river.

According to Abbreviationfinder, an acronym site which also features history of Kyrgyzstan, many Kyrgyzstan tribes in the 17th century were exterminated by the Russians in the Irtys area, a left tributary of the Ob. And in 1864 the Kyrgyzstan were completely subdued by the Russians.

They too, like the Kazakhs, were initially nomads, but gradually elected, for the most part, a permanent home. Instead the Kyrgyzstan people of the Pamir area remained almost exclusively nomads.

On May 20, 1925, Kyrgyzstan became an autonomous territory. On March 23, 1937 it was a Federated Republic of the Soviet Union and had the first Constitution.

As the Federal Republic of the Soviet Union, 1989 came without single problems, until the Gorbachev era began, with the dissolution of the Union and, therefore, with the restoration of territorial sovereignties hitherto non-existent.

In February 1990 the Communist Party won the elections for the Supreme Soviet and was appointed AM Masaliyev, president of the party for 5 years.

In June of the same year, violent unrest broke out in the region of Os where the Uzbeks made up the majority of the population, and where the shortage of housing and the lack of basic structures had given rise to discontent and the first democratic opposition organizations.

The repression was very severe; a state of emergency was declared and the border with Uzbekistan closed.

These violent systems and the absolute lack of social reforms gave rise to the Kyrgyzstan Democratic Movement, clearly in opposition, which led to the election of the liberal A. Akayev to the Supreme Soviet. Masaliyev resigned in December 1990. This month the name changed from the state, from the Kyrgyzstan Soviet Socialist Republic to the Kyrgyzstan Republic.

In February 1991 the capital Frunze also took on the ancient name of Biskek. Meanwhile, in January 1991 Akayev had replaced the Cabinet with a cabinet made up of young people ready to start reforms, especially those in the economic field.

In March 1991 a popular referendum was called in which asked whether or not to maintain the Union: the result was positive. And when an unsuccessful coup in Moscow occurred in August, Akayev was also overthrown. Once order was restored, Kyrgyzstan proclaimed independence on August 31 and Akayev was elected President of the Republic on October 12. On December 21, the country became part of the Commonwealth of Independent States.

Then cooperation agreements were signed with the other Central Asian republics and in March 1992 Kyrgyzstan joined the United Nations. In December of the same year he entered the Organization of the Islamic Conference.
However, the early 1990s were difficult as the country, the poorest of all the former Soviet states, even experienced a drop in productivity.

The Kyrgyzstan language was proclaimed as an official and Russian as the second language, given the large presence of Russians in the country, especially among specialized technical personnel.

In May 1993 a new Constitution came into force with which the parliamentary system of government was applied.
For internal politics, legislative elections took place in February 1995 and Akayev was reconfirmed in office in December of the same year.

The state of emergency, in force since 1990, was canceled in September 1995. But in the meantime, together with economic problems of various nature and extent, those related to the growing crime, corruption, production and trade of narcotic substances. And not least that of the civil war in Tajikistan bordering Kyrgyzstan. 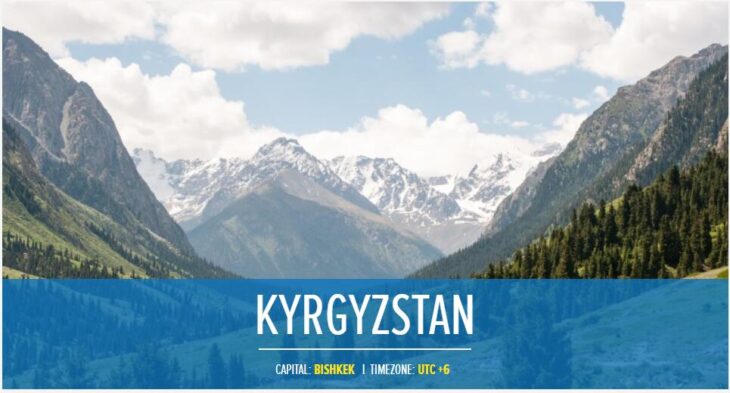 The Constitutional Court in July 1998 issued a sentence that allowed Akayev to stand for the third time in the presidential elections scheduled for 2000.

For foreign policy, an agreement of friendship, cooperation and mutual assistance was signed in June 1992 with the Russian Federation. In 1993 he participated in the peacekeeping force sent to Tajikistan for the composition of the civil war.

A treaty for the customs union and for strengthening economic and cultural relations was signed in 1996 with the Russian Federation, Belarus and Kazakhstan. And also in 1996, in addition to entering into several bilateral cooperation agreements with China, an agreement was signed with Beijing, the Russian Federation, Tajikistan and Kazakhstan to demilitarize common borders.