The state of Malaysia is politically included in the Malacca peninsula. The origin of the first inhabitants is attributed to a descendant of Alexander the Great; in the Middle Ages it was thought of indigenous people of Sumatra but then, following archaeological excavations and in-depth studies on the finds, it was established that the origins should certainly be sought in Indochina and southern China.

But other studies have led to the discovery of the presence, already around 2000 BC, of ​​the Austronese and Protomalese peoples, which were also found in the Philippines and up to Formosa. After them came the real Malaysians, who, over time, have completely absorbed the dictates of Hindu civilization, brought by traders from India from the first century after Christ onwards.

According to Abbreviationfinder, an acronym site which also features history of Malaysia, the Hindu Malaysians formed several small, politically well-organized states, as early as the 4th century. In the seventh century the great maritime power of the state developed with the reign of Srivijaya.

In the eleventh century, Java was prevalent on the other islands, while in the twelfth century Srivijaya had to give ground to a new Malaya, established in Sumatra. Around 1280 the northern part of Java passed to Siam (present day Thailand).

At the end of the fifteenth century, with the penetration of Islam, there was a progressive weakening of the Malay empire. The main propaganda center for Islam became Malacca.

In 1511 the first Portuguese arrived in Sumatra who founded the powerful kingdom of Atjeh, which however had to limit its power for the rise of another kingdom of Johore in the peninsula, by sultans driven out of Malacca.

Neither these two kingdoms, nor the Portuguese, in the seventeenth century, managed to face the Dutch. Then they too had to surrender the field to the Spaniards who, in 1565, took possession of the Philippines for three centuries; while in the Malay archipelago, the Dutch dominance gradually consolidated.

The indigenous peoples, overwhelmed by the Europeans, awoke in the name of freedom and independence, already a heritage of civilized peoples, and the Malaysian Federation was born, consisting of 4 mainland states, from 1874 to 1895: then in 1896 it extended to others 5 states of the Malacca peninsula, then to the ancient factories of Penang and Malacca.

On February 1, 1948, with the entry into force of the Constitution of the British colony of Singapore, the Constitution of the Malaysian Federation entered into force at the same time. It was made up of 10 protected sultanates and two former factories. But as early as 1946 the Malaysians made it clear to England that they wanted to escape its rule and establish an independent state.

In 1957 England granted independence and the lower part of the Malacca peninsula was recognized as an Independent Monarchy under the name of the Malaysian Federation or Malaysia.

The title of the sovereign was “His Majesty Yuang of Pertuan Agong”, that is “Supreme Head of the State”.

On May 26, 1961, the Malaysian Prime Minister Tunku Abdul Rahman proposed to establish a Federation between the Malaysian Union, Singapore, Borneo, Sarawak and Brunei. The proposal was advocated by Great Britain as being almost all of the Chinese indigenous people, they were considered good conductors to communism. The Federation would have been a good impediment to this.

After some divergences, later resolved, by the Chinese from Singapore and Manila, the new state arose on September 16, 1963.
Brunei, however, did not join and Indonesia was also against it so much that it helped the nationalist guerrillas of northern Borneo in their actions of disorder. With the expulsion of Sukarno in Indonesia, his resistance ended but the problems were not lacking given the difficulty of amalgamating many different ethnic groups. Precisely this gave rise to the Singapore secession whose premier, in constant rivalry with Prime Minister Tunku, had competed with the Malaysian Alliance.

This had the majority of seats but later lost ground due to the lack of collaboration of the various ethnic groups, who were almost unhappy everywhere.

In the elections of May 1969 the Alliance had a very small majority. Violent racial unrest led to the dissolution of Parliament and a state of emergency had to be proclaimed. The premier resigned leaving the post to his deputy Tun Abdul Razak.

On February 20, 1971, following also some economic improvement, the unrest stopped and Parliament was reactivated.

The elections of August 24, 1974 led to the victory of the National Front. In foreign policy, while remaining neutral, Malaysia developed economic and collaboration agreements with England, Australia, New Zealand, Singapore and China. Previously he had established the Association of South East Asia Nations with Indonesia, the Philippines, Thailand and Singapore and this had been the first organization to officially recognize the People’s Republic of China.

The economic situation had always improved and in politics there was stability. The 1982 elections also decreed the victory of the National Front, as well as those of 1986.

The Front, made up of the United Malay National Organization, the Malayan Chinese Association and the Malayan Indian Congress, had Prime Minister Mahathir himself as president.

But criticism and discontent occurred within the government; the Chinese electorate moved towards the Democratic Action Party and many personalities, including Tengku Abdul Rahman, the elderly founder of Malaysia, expressed their disagreements especially when trying to review the rules on the powers of the sultans.

The main protests were carried out by the Chinese who did not feel protected like the Malaysians, who had priority over all rights, positions, especially those of the public sector. And by dissatisfied Islamic fundamentalists, despite the preponderance of their religion in the country.

Since Mahathir had long feared increasingly dangerous conflicts between the two groups, he tried, in October 1987, to prevent unrest by adopting special security measures and arranging some opposition leaders suspected of fomenting the struggles. The suppression of the press was also decreed and the Supreme Court then canceled Mahathir’s reelection as president of the United Malay National Organization.

The prestige of the premier was somewhat diminished but still very strong, so much so that it was confirmed with the October 1990 elections.

In the same year, in December, Prince Abdul Rahman, son of the Sultan of Kedah, founder of Malaysia and convinced assertor of national unity, died at 87.

Contrary to political vicissitudes, the economy instead remained in conditions of stability, or rather of improvement. Productivity placed Malaysia third after Singapore and Brunei and in 1992 was more closely integrated with that of the community of 350 million inhabitants of Southeast Asia.

There was a significant, albeit unequal, distribution of wealth and unemployment had dropped significantly.
Internationally, Malaysia maintained good relations with all the countries of Southeast Asia, in particular with Vietnam and the Philippines. Only towards the first months of 1997 did those with Singapore deteriorate, also due to a subsequent financial crisis that had involved all the neighboring countries.

In order to face this serious crisis, the government was forced to apply austerity measures, bringing large cuts to public spending and repatriating many foreign workers in January 1998. As a consequence of all this, social tensions also intensified within the United Malays National Organization itself. 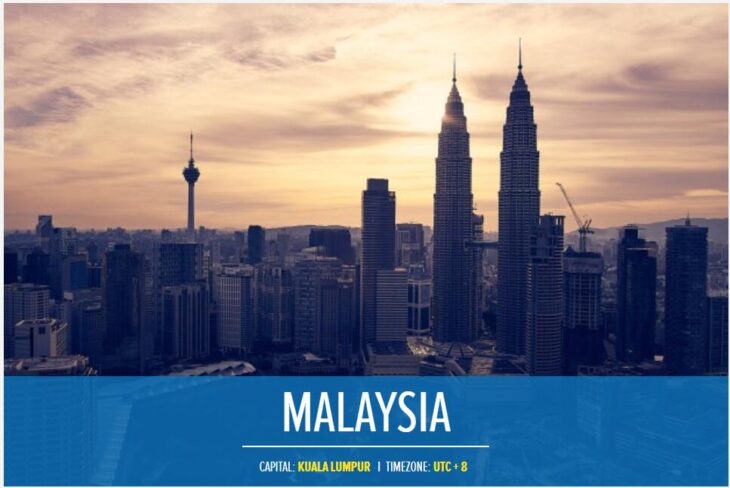 Also in 1998, some party members openly declared their dissent against Mahatir and the anti-crisis measures he had adopted. Among the fiercest accusers of the premier was I. Anwar, vice-premier since 1993, who provoked such a harsh reaction from Mahatir that Anwar was forced to leave office.

At this point, however, his supporters intervened, in particular the youth movement of the party, who manifested violently and equally violently were silenced by the police.

In April 1999 Anwar was tried and sentenced to 6 years in prison for corruption. All the opposition forces of the country joined in a single organization in June 1999 and presented, for the future elections of April 2000, a single candidate who could, with the confluence of all the votes, subvert the existing political institutions.