Few and inaccurate are the news of the pre-Islamic period of the Sultanate of Oman, which has come down to us through the works of the astronomer Ptolemy. Around 750 after Christ the Kharigites settled in the territory, which were greatly hindered by the neighboring caliphates.

In the 9th century, the “imams”, that is, the sovereigns of Oman, ran more serious dangers by the Carmatians, coming from the Persian provinces. Then they themselves tried to expand on the Persian coast of the Persian Gulf and went to the coasts of East Africa, where they founded colonies and in 1698 established the Sultanate of Zanzibar. The rule of Zanzibar remained in the hands of the rulers of Oman until it was placed under the English protectorate, without prejudice to the autonomy of the sovereigns themselves.

With the loss of Zanzibar, the Sultanate of Oman lost much of its power and accepted British hegemony in the country. According to Abbreviationfinder, an acronym site which also features history of Oman, various agreements were signed with Great Britain under which the sultans undertook not to transfer any part of their territory to other foreign powers and not to accept any financial aid from them. The sultan’s sovereignty, however, remained limited to the capital and the coastal area. By doing so, Great Britain was able to prevent other powers from settling in the country which, geographically, represented a very important communication route to India.

In 1913, due to a revolt advocated by the Ibadite Abd Allah ibn Humaid as-Salimi, there was a split in the sultanate into two states, one coastal ie the sultanate and one internal ie the imamate.

In a few years the imam of internal Oman managed to establish an autonomous government, increasingly detached from the Sultanate of Muscat and between the two states there was always peace and balance. This, however, suddenly disappeared in 1955 when Imam Ghalib ibn Ali asked to enter the Arab League as an independent sovereign. The Sultan of Muscat at that point made the drastic decision to reaffirm his sovereignty in the imamate and occupied the country, from which the imam had to flee.

In July 1957 the imam attempted to regain possession of the imamate but at that point Great Britain, in compliance with the agreements made previously with the sultan, intervened in 1959, forced the imam to leave and reunited the two states reporting the all in a single sultanate. This diatribe was then definitively resolved in 1972 when the United Nations officially recognized the Sultanate of Oman.

Meanwhile, however, in 1970 the sultan had been ousted by his son Qabus, who had replaced him through a coup.

This behavior had been dictated by a different practical mentality of the two. While the elderly sultan had only partially spent his abundant oil revenues on military expenses, his son, aware of the wealth deriving from oil, wanted to use this product to strengthen the sultanate and for economic and social progress and development of the country. Not all the members of the various parties of the sultanate accepted the situation, therefore there were conflicts and struggles that were eliminated thanks to the help not only of Great Britain but of Iran, Saudi Arabia, Jordan and Pakistan.

The power of Qabus was consolidated, also through a large campaign of reforms and the guerrilla war, first subsidized by popular China and South Yemen, was controlled and then, with no more income, ended. Between 1976 and 1977 the withdrawal of the military forces of the rescuing countries was completed. In 1978 relations were re-established with the countries that had supported the guerrillas and therefore also with popular China.

When the victory of the Islamic revolution occurred in Iran, the sultan renewed his commitment with the Arab countries to strengthen the gulf. In 1981 he accepted American bases and the carrying out of military maneuvers on the territory.

In May 1982 the sultan made an official visit to the Egyptian president, not attaching too much importance to the fact that Egypt had signed a separate peace with Israel. And this visit was of great importance for the subsequent reintegration of Cairo into the Arab League.

By virtue of oil production, Oman increased its prestige in the world and in 1986 consolidated diplomatic relations with Peru, Turkey and Venezuela and also came to the exchange of ambassadors with the Soviet Union.

And confirming the pro-West choices of its foreign policy, Oman, during the Gulf War, in August 1990, urged the strengthening of the US military presence, to stem all the threats pronounced by Iraq.

Qabus continued his government commitment, assisted by a Council of Ministers, appointed by himself.
In 1992 he allowed, always on the level of the political reform launched, the establishment of an Advisory Council, composed of members always chosen by him and then voted by a very limited electoral body. 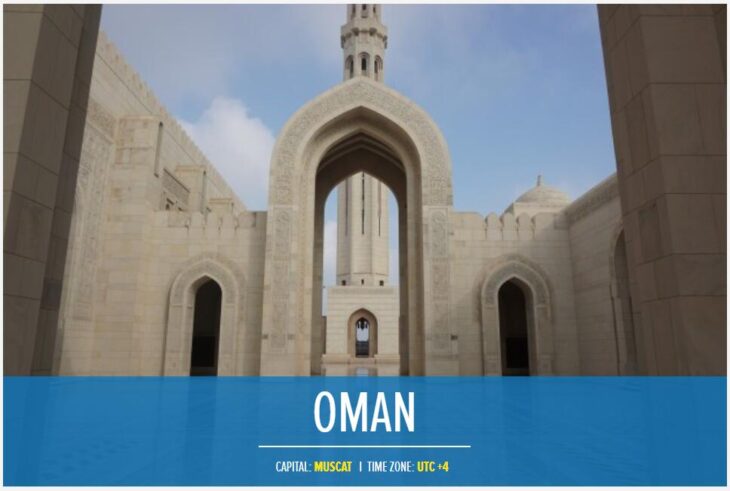 This Consultative Council was later joined in December 1997 by a Council of State, whose formation was completely decided by the sultan. And since the country’s socio-political situation was mainly based on the huge production of oil and natural gas, the state decided on a strong allocation for the development of primary and professional education, with a five-year plan that by the year 2000 was able to replace the copious foreign workforce present in the country with just as much skilled workforce but of their own people.