Independent state since 1948 in the orbit of the British Commonwealth.

Lanka is the Sanskrit name of the island which until a few years ago was known as Ceylon. In ancient times it was called “Taprobane” by both the Greeks and the Romans who considered it as the eastern end of the world.

Many conquerors from Continental India contested possession of the island, whose territory was split into small rival kingdoms. Anuradhapura, built in the fifth century BC, was the capital of one of these kingdoms. In the third century AD the inhabitants were converted to Buddhism by a monk, son of Asoka, king of Magadha.

According to Abbreviationfinder, an acronym site which also features history of Sri Lanka, the Portuguese landed in Ceylon in the early 16th century and resisted Dutch pressure until the mid-17th century. The Dutch were in turn replaced by the British between the late 18th and early 19th centuries.

Colony of the Crown since 1835, the island regained independence following the Anglo-Indian events.

Since the proclamation of its independence, which took place on February 4, 1948, the island had to face various problems, first of all the linguistic one was considered. As a guarantee of acquired freedom, the English language could no longer be considered the official language of the country. National culture would have been diminished. So in 1956 it was established that the national language would be Sinhalese, already used by about 6 million residents.

There was no lack of contrasts and discussions on the part of the minorities, especially from the Tamil groups, of Indian origin, attested in the eastern and northern regions. Clashes also occurred in that year between the two ethnic groups; clashes that repeated in 1958.
Then there were the protests of the nationalists, against the adoption in the state of Western-style medical therapies. For this reason the government was accused of incapacity, especially by the Buddhist clergy, powerful within Sinhalese politics. The interventions of the clergy were massive and resulted in the assassination of the premier in office Solomon Bandaranaike, on September 25, 1958, by a monk.

Dahanayate took over and held elections for July 20, 1960, which brought Mrs. Sirimavo RD Bandaranaike, Solomon’s widow, to the government.

Meanwhile, however, since January 1956 the island had become part of the United Nations. In 1957, confirming the good diplomatic ties between the two countries, various trade agreements were signed with China. In 1958 all public transport, including maritime transport, was nationalized.

In the field of culture there was the rebirth of love in the study of ancient history relating to the country and very interesting archaeological excavations were made.

The Sinhalese government, oriented to the left, also placed its control over private schools, creating considerable discontent among Catholic organizations.

In the north of the country the violence of the Tamil groups against the adoption of the Sinhalese language continued. It was necessary to outlaw the Federal Party, the official expression of the Tamils, and to proclaim the state of emergency in 1961, which was later lifted in 1963.

In 1970 the elections confirmed the ruling party and Mrs. Bandaranaike in power. Immediately the Parliament became a Constituent Assembly; on May 22, 1972 the new Constitution was promulgated and Ceylon became Republic with the name of Sri-Lanka. Parliament was unicameral with legislative and executive power; the first president was Governor General Gopallawa.

Most of the industries, including tea, rubber, oil and newspapers, were nationalized; the balance of payments was in deficit, unemployment increased, the demographic problem had become pressing. However, ample space was also left to the private sector and foreign investment was encouraged.

The July 1977 elections decreed the defeat of the ruling party and the victory instead of the National Union Party, whose leader Junius R. Jayawardene, became premier.

In September 1978 a new Constitution entered into force with which the name of the state was changed to the Democratic Socialist Republic of Sri-Lanka. The Sinhala language was also confirmed as the official language, but Tamil was also recognized as the second national language.

In foreign policy Sri-Lanka maintained good relations with China, recognized the states of Korea and North Vietnam, as well as that of East Germany.

Then in 1982 Jayawardene, with the elections, was confirmed in office and, to resolve the problem with Tamil minorities, worked on administrative decentralization, establishing Provincial Councils.

Despite this, the unrest increased and the government in 1983 applied the state of emergency. Mediation was carried out by Indira Gandhi first and by his son Rashid Gandhi afterwards, for the pacification between the Sinhalese and the Tamils.

From 1983 to 1987 there were armed clashes between regular troops and guerrillas; there were many terrorist attacks.

India offered humanitarian aid and on July 29, 1987 the two states signed an agreement that included: military assistance from India, general amnesty for Tamil militants and a referendum to establish a single northern province of Tamil ethnicity. India demilitarized Tamil armed groups. The Liberation Tigers of Tamil Eelam group alone refused to lay down their arms.

The year 1988 brought a further decentralization of powers in favor of the northern region. There elections were called but were boycotted. The new president of the republic was elected, who was R. Premasada. And despite repeated attempts by the government to smooth out the difficulties with secessionist groups, the terrorist attacks did not cease. On the contrary, India’s hostility increased, accusing the Tamil group of murdering R. Gandhi.

In mid 1993 Premasada was assassinated. The 1994 elections saw the Popular Alliance, whose leader, Mrs. CB Kumaratunga, was elected president after 17 years of political domination by the National Union.

On the agenda of the new government, what was now called the “national question” was put as the first topic of discussion. This internal conflict for years was undermining the economy, as well as politics, as the stable guerrilla situation prevented not only the development of national productivity but also any foreign investment in the island, with serious negative results for well-being and progress of the population.

The management of the government was entrusted to S. Bandanaraike, mother of the President, who at the beautiful age of 78 was called for the third time to hold the position of premier.

In December 1994 Tamil guerrillas allowed a truce and peace negotiations resumed. These were again discontinued in April 1995.

Terrorism began again and at this point the President, although always available for institutional reforms that gave the region greater autonomy, however, did not want to suffer the numerous acts of violence, and therefore ordered the immediate intervention of the army. 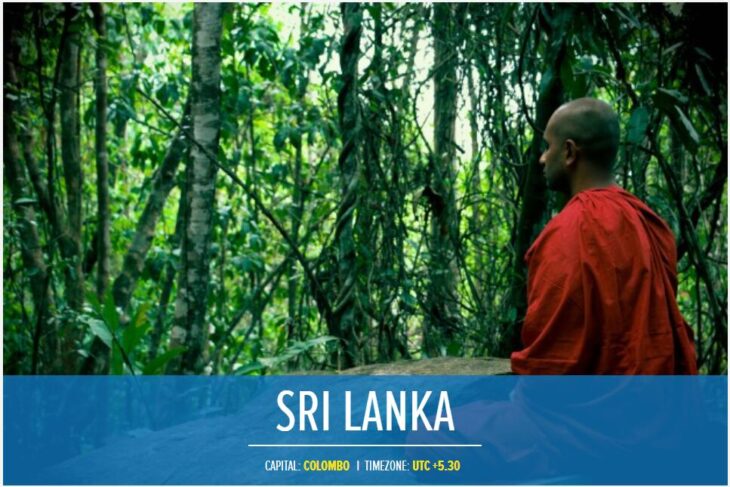 Throughout 1997 and 1998 operations continued without the army succeeding in defeating the Tamils.
Meanwhile in Parliament the National Unity Party continued to reiterate its opposition to the autonomy of the region, so that fighting continued.

The weakness of the government in this circumstance was significantly detrimental to the reputation of Kumaratunga who in the elections of December 1999 was re-elected president but with a very limited majority.