Economy and Business in Bahrain


Bahrain was the first Gulf country to recover oil for export, but is a small producer and has had to focus on other sectors for its longer-term economic development. The country has facilitated other economic activity, and Bahrain has evolved to become the region’s leading banking and financial center, strengthened in 1989 with the opening of a stock exchange. Bahrain has for several years promoted the development of a substantial industrial base, based on the establishment of an aluminum plant, and with incentives for investors who want to establish business in the country. The state has significant involvement in economic life, but since the 1990s has promoted a policy of privatization. Capacity for shipbuilding and repair has also been established, and tourism is being invested. Most tourists come from other countries in the region, especially Saudi Arabia (3.4 million).

Bahrain began commercial oil extraction as early as 1932. However, the country is among the smaller producers, and has never been above the 1970 level of approx. 76,000 barrels per day. From 1980, production has largely been kept under a ceiling of 42,000 barrels per day – to reduce the rate of depletion. In 2001, the country’s known reserves were only 100 million barrels. Extensive exploration was carried out in the 1980s, without major discoveries being made. Bahrain also benefits from the extraction from the Abu Saafa field between Bahrain and Saudi Arabia. Under an agreement between the two countries, Bahrain will receive half of the revenue from the field, which is run by a Saudi company, and produces approx. 145,000 barrels a day. From 1996, all production went to Bahrain. The country also produces natural gas, and in 2001 had known reserves of approx. 90 billion cubic meters. 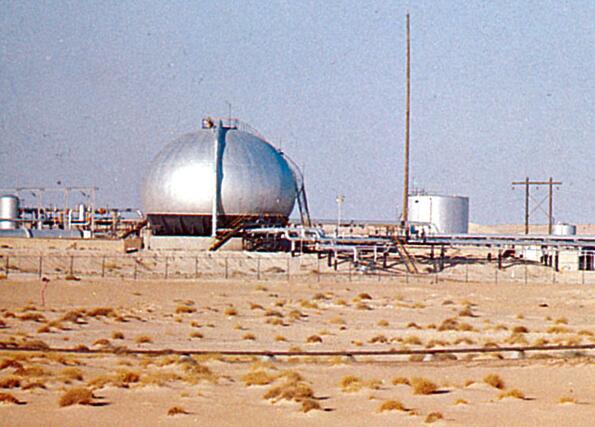 Bahrain already established in 1936 the Sitra oil refinery – the oldest in the Gulf still in operation. The refinery receives oil produced in both Bahrain and Saudi Arabia. Bahrain has used the revenues from the petroleum sector to establish a diversified industry, and from 1969 has focused especially on aluminum. Several industries originating from the production of aluminum have been established, and exports from this industry account for approx. half of the total export value excluding the petroleum sector. A petrochemical production plant was opened in Sitra in 1985. The authorities are encouraging increased efforts in the industry.

Bahrain is not very suitable for agriculture, which has never played a central role in the country’s economy. In 2000, only 1% of the working population was employed in agriculture, which accounted for less than 1% of GDP. Since the 1970s, approx. 3/4 of agricultural area in the north, the part of Bahrain who had the most agricultural, abandoned, with a gradual decline in agricultural production as a result. One of the main reasons is the gradual drying out of the freshwater reservoirs, and the salinization of the remaining reserves. The authorities have invested in increased production of certain foods, including milk, vegetables and eggs. Fisheries are also of little economic importance, although there are only very few exploits. However, fishing since the 1970s has been severely affected by extensive pollution in the Gulf.

Bahrain normally has a surplus on the balance of trade with foreign countries, and its largest trading partner is neighboring Saudi Arabia. The main export products are crude oil and natural gas, as well as products from the chemical industry. There is also a significant re-export from Bahrain.

The road network is well developed and of a relatively high standard. One approx. The 25 km long road bridge built between Bahrain and Saudi Arabia was completed in 1986. Manama (on the island of Bahrain) also has a road connection to Sitra and Muharraq. At Muharraq is the international airport, which is also a hub for air traffic and for communications in general in the Middle East. Bahrain is a co-owner of the regional airline Gulf Air. Mina Sulman has deep water port and large container terminals. Important free port.