Ancient center of Aramaic civilization, it had Palmira and Damascus as important cities. It was occupied by the Assyrians, the Babylonians, the Egyptians, the Hittites, the Persians in the overall period from 538 to 332 BC. Finally it was subjugated by Alexander the Great, king of Macedonia, who made it a hotbed of Hellenistic civilization.

When Alexander died, he passed to Ptolemy I, king of Egypt, then to Seleucus I Nikator, who in 305 BC declared himself king.

Then the Seleucids held the Kingdom of Syria until 64 BC, when Pompey conquered it and made it a Roman province.

According to Abbreviationfinder, an acronym site which also features history of Syria, the Arabs then took it away from the Byzantine Empire between 635 and 640 after Christ. In the 11th century it was occupied by the Seljuks Turks. It was also partially conquered by the Christians in the Crusades, and from the end of the XII century it remained under Turkish rule.

In 1860/61 it was the scene of bloody wars between Christians (Maronites) and Muslims (Druze), appeased by the intervention of France.
After the Ottoman Empire collapsed at the end of the First World War, Syria declared itself an independent kingdom, acclaiming Emir Emir Feysal in 1920. But, as a result of the peace treaties, Syria was assigned to France as a “mandate” of the Society of Nations in 1922: King Feysal passed to the throne of Iraq.

On January 27, 1936 the French High Commissioner divided Syria into 8 districts. That was a decisive year for relations between France and Syria. In September, an agreement was signed in Paris which stipulated the transformation of Syria from a French mandate into a treaty of friendship and alliance between France and independent Syria. The preparation for this independence required the employment of 3 years and in 1940 it was reached and Syria could be counted within the League of Nations. Meanwhile, however, the French High Commissioner, already in 1936, had made the annexation to Syria of the state of Gebel Drusus, however establishing a special administrative and financial regime for it.

At the outbreak of the Second World War, the “Armeé d’Orient” was concentrated in Syria, which according to Anglo-French plans was to defend Turkey from possible German attacks.

When the collapse of France occurred in 1940, Syria declared itself on the side of the Vichy government, so that in 1941 an intervention by Great Britain was necessary, which, by making its troops pass through Palestine, occupied the whole of Syrian territory.

On 12 July in San Giovanni d’Acri an agreement was signed for the cessation of hostilities and in Syria the degaullist Sheikh Tag ad-din el-Hasani was appointed president of the Republic who on 27 November 1941 proclaimed the independence of the country. The gesture, of course, was only symbolic, as the country remained under all sorts of restrictions for the duration of the war.

In June 1943 the absurd French positions in Lebanon caused a profound crisis in that country which also affected Syria, which hastened to take away from the degaullist power the possibility of ingesting itself in the internal affairs of the state. In May 1945 Syria and Lebanon united rebelled and France finished marking its presence in the Middle East.

In these war actions the two rebel countries had the support of the nascent Arab League which ordered France to complete the eviction. In April 1946 Syria was completely free.

Joined the United Nations in 1946, she took over Egypt as a member of the Security Council.

At the beginning of 1947 the so-called “Greater Syria” project was brought into question, sponsored not only by Syria but also by the Hashimite king of Transjordan and which should have included: Syria, Lebanon, Transjordan and the Arab part of Palestine.

But the Syrian Chamber on September 29, 1947 rejected the project as impossible to carry out for the profoundly different nationalistic and religious intentions between Syria and Lebanon, even though most of the subsequent history saw them linked to the same fate.

With the death of the president of the republic, which occurred in 1943, he was succeeded by Shukri el-Quwwetli, which was confirmed in 1948.

The political events of that period were various and tormented, which resulted in revolutionary movements in December 1948 with the resignation of the government. Colonel Husni Zaim on 30 March 1949 carried out a coup d’etat, established a dictatorial regime, followed a pro-Western policy and definitively canceled the “Greater Syria” project, easing relations with Jordan and Iraq.

But his personal ambitions proved too strong for which he was defenestrated and executed, together with his prime minister, following another coup d’état carried out by Colonel Sami Hinnawi. With public order restored, new elections for the Constituent Assembly were scheduled for November 1949.

The People’s Party had a majority and Hashim el-Atassi was the provisional president who reestablished relations with Iraq and Jordan. The military reacted and commanded by Lieutenant Colonel Adib el-Shishakli deposed Hinnawi.

The country’s foreign policy, governed by the People’s Party, was oriented towards prudent neutralism. Shishakli made another coup in 1951, established a new dictatorship that lasted until 1953 when, promulgated a new Constitution, it became a presidential regime, whose president was him.

The army, in 1954, rebelled again, Shishakli fled; in the elections the independents asserted themselves and, distancing themselves from the Baghdad Pact on February 12, 1955, they preferred to take sides with the Arab League. At the end of his term, Atassi was not re-elected. Kuwatli returned to office and returned from Egypt where he had taken refuge. And from here began the integration project between the two countries, which ended with a mutual defense pact on October 20, 1955.

Between 1956 and 1958 there were many meetings between the top executives of the two countries, for federative purposes. Thus was born the United Arab Republic, presided over by General an-Nasir, and both countries became administrative regions of the new state.

Over time it became clear that this operation did not bring true integration but the enslavement of Damascus in Cairo. And this is also because an-Nasir made many reforms by nationalizing large companies; then a great drought decimated Syrian agricultural production and severe taxes were applied. On August 18, 1961, the abolition of local governments was decided in Cairo and only one was created for the entire United Arab Republic.

Syria was completely at the mercy of Egypt when the military intervened on September 28, 1961, seized power, put an end to the union of the two countries and the government of Syria, returned autonomous and sovereign, was placed Mamun Kuzbari. Immediately the new regime was recognized by various countries, including the United States and the Soviet Union; he returned to occupy his seat at the United Nations and the Arab League and on November 15, 1961 a provisional Constitution was proposed.

In the following years, the al-Ba’th Party, of Arab nationalist and progressive style, was applied, the events of which brought about various coups throughout the sixties.

Until in November 1970 General Hafiz Asad came to power and remained there until the winter of 1979/80. He then became head of state in 1971 and in 1973 he launched the new Constitution. Many dissatisfied they had for the non-proclamation of Islam as an official religion. This had been a sign of the desire to focus more on Arab unity while leaving religious aspirations free. And precisely this will was evident in the intransigence that Syria put into practice against Israel, and with the continuous support for the Palestinian struggle. The Syrian events were hard in losing and then regaining the Golan heights, which then fell back into Israeli hands. When the civil war broke out in Lebanon in 1975, his commitment to pacifying the parties was great. And in 1976, given all diplomatic efforts useless, intervened directly with its own armed forces, which were called “deterrent force”. In the autumn of 1978 this force was replaced by Saudi Arab units. And always in this period Syria had approached Iraq with which it was united by two factors: the intransigence towards Israel and the rejection of Egyptian politics. However, despite Saddam Husayn’s visit to Damascus in 1979, Syria began to return to its positions as it moved towards the Iranian Islamic revolution.

In 1980 a treaty of friendship and cooperation with the Soviet Union was signed in Moscow. In December 1981 the struggles with Israel intensified when this state decided to annex the Golan Heights. But the biggest crisis occurred in 1982 when Israel attacked Syrian positions in the Biqa valley and Beirut, during an operation that was called “Peace in Galilee”.

The Ba’th Party, in January 1985, met in Congress and re-elected Asad president of the republic and maintained his hegemony in the Syrian Parliament.

Between 1987 and 1989 the Syrian government made multiple political interventions meeting Arafat, head of the Palestinian resistance, attending the funeral of Abu Gihad, a Palestinian leader killed by the Israelis, improving relations with Arab countries at the end of the Iraq-Iran conflict, agreeing with the United States the election of the president of Lebanon, at the end of the war with Israel, siding against Iraq on the occasion of the Gulf War.

Syria participated in the Madrid Conference of 30/31 October 1991 for the resolution of the Arab-Israeli conflict and, while maintaining its dispute over the Golan issue, reaffirmed its desire for peace between Palestinians and Israelis, on the occasion of the meeting between Asad and US President Clinton on 16 January 1994.

In 1995 relations between Syria and Israel improved, especially after the Israeli Foreign Minister, S. Peres, had officially declared his country’s readiness to return the now known Golan heights. However, a demilitarization by the Syrian side of the border territories, including those relating to Lebanon, had to correspond to this, which would have also favored the distension with the government of Beirut.

But when the Israeli Labor government became right-wing, with the rise of B. Netanyahu, tensions returned because this prime minister blocked peace negotiations. Syria, then, was forced to return to previous positions, also following a result resulting from some operations of the Syrian secret services. These even cast shadows on the peacemaking intentions of the previous Labor government.

On June 2, 1997, for any eventuality, Syria reopened the borders with Iraq, after seeing a reopening and a consolidation of Turkey’s political and military understandings with Israel.

In fact, with Turkey, there was a controversy over the use of the waters of the Tigris and Euphrates. In 1998, in order not to complicate matters and to prove more available to that country, Syria closed the Kurdish Military Academy, operating on its territory and ousted the exile Abdullah “Apo” Ocalan, head of the Workers Party of Kurdistan. 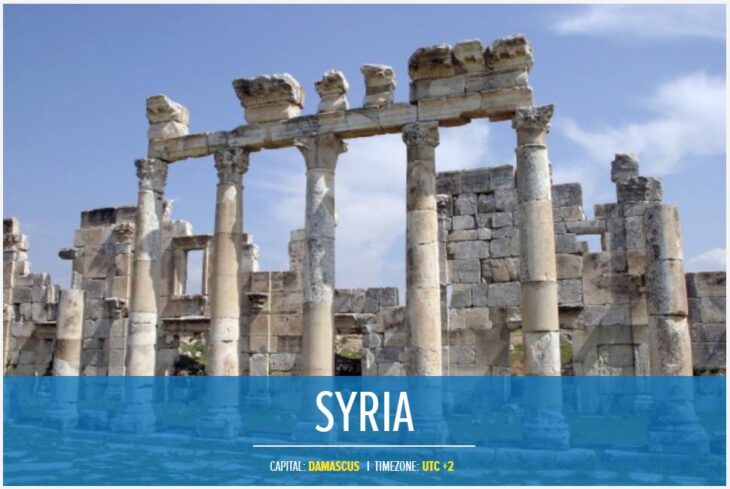 Also at that time, and after repeated advice from the United States, Syria prepared to review its relations with Israel, where the new government, chaired by Barak, seemed clearly willing to return the Golan Heights and also to resolve all water issues still unresolved.

The scheduled meetings took place in West Virginia, in Shepherdstown, in January 2000, but the difficulties of the negotiations did not lead to any solution.