Early theater in this cultural area was characterized by narrative traditions that were presented by singers / musicians. Koskosa is a form of popular, theatrical play, and one can find remnants of traditions akin to the Dionysian. A European contemporary theater was founded by Mirza Fatali Akhundov (1812-78), who was a strong admirer of European culture. He wrote Western-style comedies – the first in the Islamic cultural circle – and he was translated into several European languages.

The Tagiev Theater and the Mailov Theater in Baki were started in the second half of the 19th century, and in the early 1900s they were heavily influenced by Russian theater. The Mailov Theater was nationalized in 1919. In 1922, a state drama theater was founded, with the status of Azerbaijan Academic Drama Theater (GAT). Many western classics were eventually played here. The Drama Theater in Sheki was opened in 1975 and a wide selection of modern European drama from Brecht to Dürrenmatt was shown.

Since independence in 1991, it has been seen that newer forms of theater and drama have developed in Azerbaijan. But as with the theaters of other former Soviet republics, new ways of financing theater operations have been found without state support. 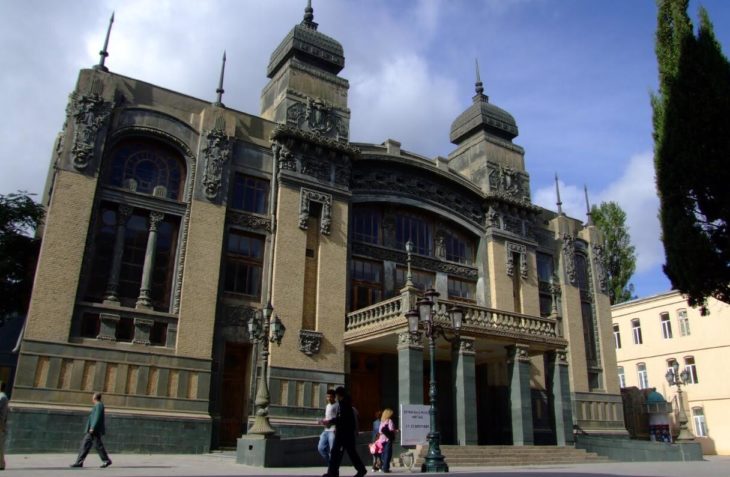 Rock carvings from the 4000s to the 2000s BC manufactures ritual dancers with percussion and wind instruments. Songs and games on flute, skirmish, lute and harp have been documented from ancient times, and musicians at that time had high status. Literary sources from the 9th to the 13th century tell about compositions, performance practices, the emotional aspects of music and place in rituals, ceremonies, military and social functions, the instruments’ tonal qualities and music at festivals, at court and during hunting.

In the medieval urban culture, a cyclical vocal and instrumental form of music, mugam, developed with texts from the country’s classical poetry. The term mugam is akin to the Arabic makam and indicates that the music is improvised on the basis of rules for pitch selection, scope, compulsory melodic and rhythmic motifs and tempo. Each mugam has names that express its character. The melody includes microtonality, i.e. has tear cross bands that divide the octave into 17 or 19 intervals.

The traditional musician, Ashhug, has the status of poet and composer.

Towards the end of the 19th century, musical impulses from the East and Middle East were replaced by Russian influence with the introduction of European musical forms and institutions such as symphony orchestra, opera, theater, and later the establishment of the conservatory in Baku (1921). After a lengthy musical political polemic in the 1930s, the view that the future of Azerbaijani art music lies in a synthesis of European and national traditions prevailed. On this basis, composer Uzeir Hajibeyov created a school, which is further developed, i.a. by Kara Karayev, in serial and aleatory music with national tone.