The Israeli art has been strongly associated with the surrounding countries, Babylonia, Assyria and Egypt, later it was characterized by Roman and Islamic culture. Most of the pre-Christian art has now disappeared, while excavations in Gaza, Jerusalem and Jericho show that in the art of building sun-dried bricks were used very early and square as early as 1000 years BCE. Wooden structures were well developed, as shown by the description of Solomon’s Temple. The floor plan here was Phoenician, while gate towers and palm columns testified to Egyptian influence. The decor had vegetable motifs because the doctrine forbade god or man-making. For the same reason, there is no free sculpture either. The cherubs with several pairs of wings mentioned in the Book of Kings are the result of strong Mesopotamian influence.

During the Maccabees (100 century BCE), the Hellenistic influence began, and in Jerusalem many remains are preserved from Roman times. Roman art also influenced the Jewish to some extent. Especially from Late Antiquity, there are preserved floor mosaics from synagogues that show animal and human representations inspired by classical mythology. In the early Christian era, rich building activities took place, partly of a local character and partly of imperial command, such as the great Constantine shrines of Jerusalem and Bethlehem of the 300s. 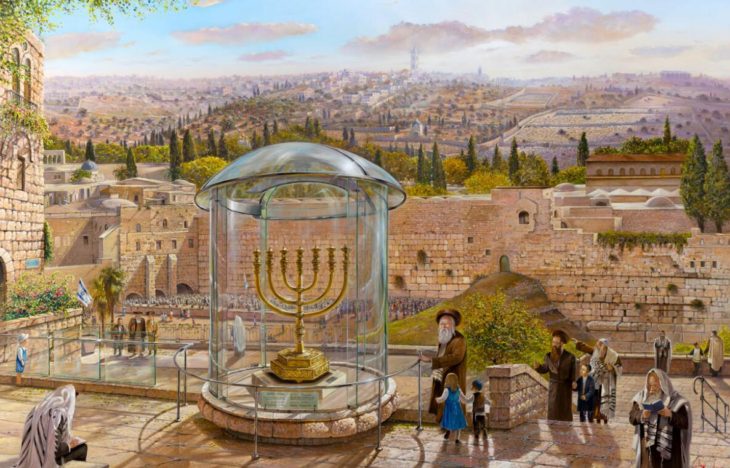 Israeli art after 1900 has largely undergone the same phases as the European one. But the immigrant artists had to go through a difficult adjustment process before finding their new form of expression. Bezalel, the first school of arts and crafts, was founded in Jerusalem in 1906 by Boris Schatz (1867-1932), who understood how to reconcile ancient traditions with modern development; he can be said to be the creator of the modern art environment in Israel. Artists who immigrated before the First World War, meant to find inspiration in the ties that linked them to the country’s past, but as the great immigration set in after the war, art life entered a new phase. Most of the artists came from Eastern Europe and were influenced by the environment there, and throughout the 1920s the distinction became more evident, by young indigenous artists such as the painters Nahum Gutman, Bezalel Schatz and immigrants who had all acclimated, Israel Paldi, Reuven Rubin and Menahim Shemi, all educated at Bezalel. They wanted to find a national art, without looking back to the ghettos. They liked to paint the Jewish environment and the landscape around Jerusalem.

The next step in the development came with the immigrant artists from Hitler’s Germany. Many of them had studied in Paris and were heavily influenced by modern French art, e.g. Dadaist Marcel Janco (1895–1984).

In 1948, Yossef Zaritsky and Janco founded the New Horizons group. This group marked its attitude from the very beginning of being in opposition to the expressionist and folkloric tradition that had been prevalent in Palestine since the 1920s. Development towards an abstract art under the influence of the Paris and New York schools was considered the best means of emphasizing the necessity of modern art in a modern state. With the help of group exhibitions, annual “lounges” and a critical engagement, the group became very prominent in the new Israeli society. However, subsequent unrest, wars, immigration waves and problems have given way to a mood of unrest and uncertainty that also characterizes the arts. New Horizons’ theories have turned away. Some have sought out and worked in major centers such as New York, Paris, London and Milan, while others seek their substance in the human, social and political problems that so strongly characterize Israeli society. Marc Chagall performed a series of stained glass windows in the Hadassah Synagogue in 1962.

The development of sculpture began in earnest in the 1930s, when Ze’ev Ben-Zwi, who had great knowledge of Cubism, became associated with the Bezalel school. An academic direction was prevalent before 1948. The style elements were many, also ancient relics and archaeological finds influenced the sculptors. In the 1960s and later, abstract sculpture has come into play. After the establishment of the State of Israel, many sculptors were commissioned for public buildings and places. Many memorials have been erected, several with the persecution of Nazism as a motive. Among these is Nathan Rapaport’s monument to the defenders of the Warsaw Ghetto (in Warsaw ; copy by Yad Vashem in Jerusalem). Tel Aviv eventually became the center of modern art. Several art schools and art museums were established.

Much has been done to develop the craft, both Oriental (Yemenite and Iranian) and more modern designs – in glass, ceramics, mosaics, textiles, wood and silver and other metals. Artistic quality also characterizes many stamps Israel has issued.