Japanese garden art has ancient roots. The first traces can be traced back to around the year 500 and show strong influence from Chinese tradition. It is believed that the most important basic elements and the Japanese distinctive character were fully developed in the 1400s.

The design language is informal without symmetry or clear geometric alignment, but does not seek to emulate free nature. Rather, it is about symbolizing landscapes, creating associations and stimulating the imagination. A typical situation shows large boulders placed on an elevation to symbolize mountains, with the “guard stone” slightly back for the center. Surfaces with curving outlines symbolize the sea, with boulders like islands. This can also be achieved without the use of water, with horizontal surfaces with grated sand or a cover of pine needles as a picture of the sea, where the direction of the stripes marks the currents.

The facilities are usually small and clear, with close and direct contact between the rooms indoors and the garden. The vegetation is often winter green with moss cover or sand on the ground. With the help of pruning techniques, growth is inhibited so that trees and shrubs keep their shape almost unchanged for a long time. Classic examples are the temple gardens in Kyoto where the means are sometimes minimized to sand, stone and a surrounding wall.

The legacy of traditional garden art has been passed on in modern Japanese landscape architecture and has significantly influenced the environmental design of Western countries, especially with regard to the connection between indoor and outdoor environments. American landscape architects with a Japanese background have played a significant role, including Hideo Sasaki and Isamu Noguchi. In Japan, there are educational programs in landscape architecture at 15-20 universities, and the field of study has an important place in today’s planning in the country. 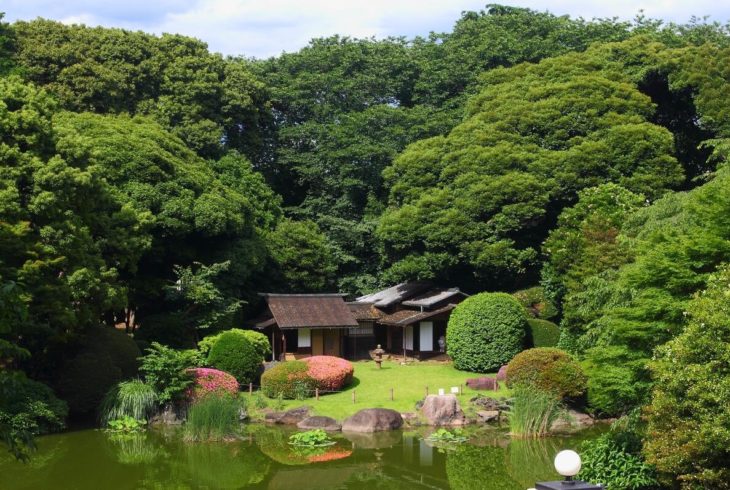