Bahrain, Monarchy of the Middle East ( Gulf of Persia ). The country consists of two archipelagos outside the Arabian Peninsula and Saudi Arabia, and is physically linked to the neighboring country through a bridge link. The country also has maritime borders with Qatar and Iran.

The population of just over 1.5 million is culturally composed, with a majority of guest workers. The ethnic Bahraini population is mainly Muslim but split between Shi’ites and Sunnis, which has led to conflict in recent times. The official language is Arabic.

Bahrain’s history is closely linked to other parts of the region, including Persia. The country has traditionally been a center of regional trade; in modern times it has developed into a financial center. After being under the control of various countries, and then under British protection, Bahrain became independent in 1971. After a referendum, the country in 2002 became a constitutional monarchy; just as fully, the king (formerly the emir ) has retained extensive power.

The unanimous board contributed to the 2011 democratic uprising, which was abolished with force, backed by the Gulf Council military intervention, led by Saudi Arabia. Since independence, Bahrain has had close political and economic ties with the West, not least the United States, which has military forces stationed in the country. 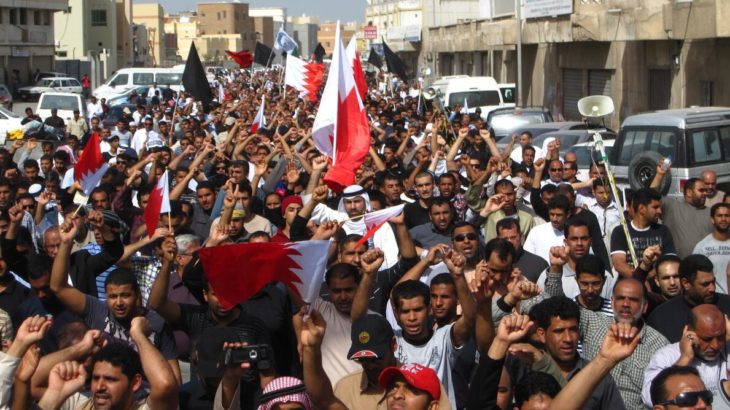 Bahrain is one of the smallest states in the Arab world, with around 1.6 million inhabitants, of which about 45 percent are considered ethnic Bahrainians. Most of these are of Arab origin, others of Persian origin. Almost half of the population are guest workers, most from South Asia and other countries in the Middle East. The Bahraini community is modern, and is often regarded as somewhat more liberal than other Gulf states. Bahrain has a tradition of political opposition, although parties are not allowed, and the opposition has been increasingly pursued. The population lives mainly in cities.

Nearly three-quarters of the citizens profess Islam ; the largest religious minorities are Christians and Hindus. The Muslims split between a Shia majority and a Sunni minority, where the size ratio is politically contentious. The last official figures are from a census in 1941, which showed a slight overweight of Shi’ites; later it is assumed that these make up 65-75 per cent of the population, while other calculations estimate 55 per cent. The ruling elite, with the royal family, are Sunnis. The opposition consists mainly of Shias.

Bahrain is a constitutional monarchy, ruled by the al-Khalifa dynasty. Following an absolute reign of independence in 1971, there has been some political liberalization, particularly related to the introduction of the 2002 Constitution, which introduced universal suffrage. The former emir then proclaimed king and head of the new constitutional monarchy. Still, the real power lies with the king and the royal family.

The National Assembly, which was dissolved in 1975 and restored in 2002, consists of 40 elected members of the House of Representatives, Majlis an-Nawwab, and a consultative council, Majlis al-Shura. This also consists of 40 members, but these are appointed by the king. Women were elected to the National Assembly for the first time in 2002, and political lists were allowed, although parties remained banned. Dissatisfaction with the failure to carry out political liberalization and contradictions between social groups has led to several revolts, first in 1994–1995, then in 2004 and in 2011, with clashes between protesters and security forces.

Demanding as one of the most politically liberal countries in the Arab world, democratic rights were narrowed after the uprising in 2011. The main opposition groups, such as al-Wefaq, are banned, and in the election of a new National Assembly in 2018, it was no real opposition to regime-friendly candidates.

Since independence, Bahrain has pursued a pro-Western foreign policy, with close cooperation especially with the United Kingdom and the United States, as well as close relations with Saudi Arabia. Since the Gulf War in 1991, the United States’ fifth fleet has had its main base in Bahrain, which played an important role during the US attack on Iraq in 2003.

Bahrain is a member of the UN and most of the UN’s special organizations, including the World Bank; The Arab League, the Gulf Council and OPEC.

Bahrain’s history is closely linked to the Gulf and the Arabian Peninsula, and trade with South Asia. The country emerged as its own state formation only in recent times, and as an independent state from 1971.

The country has had a resident population for five thousand years, and is considered the seat of the ancient kingdom of Dilmun, which traded with Mesopotamia and the Indus Valley in the Bronze Age. After partly being self-governing, Bahrain came under Portuguese rule in 1521–1601, then under Persian rule until 1783. Then the Arab Khalifa dynasty came to power, and this still governs the country. Both Iran and Turkey claimed Bahrain, and the Sheikh sought protection from the United Kingdom. The country was a British protectorate from 1816 until independence in 1971, and became the political headquarters of the British in the Gulf of Persia.

Bahrain chose independence over federation with other countries in the region, entered into political and military cooperation with the United Kingdom and the United States, and joined the Gulf Council. Particular contact with neighboring Saudi Arabia is close. A new constitution was passed in 1973, to be repealed in 1975. Riots against the regime in 1994 contributed to liberalization following the change of throne in 1999. The new constitution in 2002 did not meet expectations, partly because the king fortified his power. At the same time, the Shia majority still experienced discrimination. Democracy rebellion during the Arab Spring was defeated with the help of military intervention by member countries of the Gulf Council, led by Saudi Arabia. Bahrain has participated in the multinational, regional sanctions against Qatar since 2017, and is part of the Saudi-led coalition in the 2015 Yemen war.

Bahrain has developed a complex business sector based on the country’s oil and gas revenues. Bahrain was the first country in the Gulf to recover oil for export, in 1932. The country has been a small petroleum producer and has focused on other sectors for its long-term economic development. Other economic activity has been facilitated, and Bahrain has evolved to become the region’s leading banking and financial center, strengthened in 1989 with the opening of a stock exchange. This position was later challenged by other countries, and also suffered as a result of the uprising in 2011. Tourism has become an important industry; Most tourists come from the region, especially from Saudi Arabia and Kuwait. The state is active in economic life, but since the 1990s has promoted a policy of privatization.

Bahrain has, with its origins in the establishment of an aluminum plant and a favorable investment framework, built up a significant industry, especially in the petrochemical sector, as well as shipping, with shipyards. With declining oil recovery, crude oil is imported from Saudi Arabia for refining and exporting. In 2018, discoveries of large deposits of oil and gas were announced, which could make Bahrain a larger petroleum player than ever in the country’s history, with great significance for a depressed national economy.

Under three per cent of the area is cultivable, and agriculture plays little role in the economy; agricultural production consists mainly of vegetables and dairy products. Bahrain has a modern transport sector.

Bahrain’s culture is characterized by the country’s extensive trade links and historical influence through foreign domination. This has led to an ethnically and culturally diverse population with impetus from several quarters, and has shaped the country’s culture and society, which is considered more open than is the case for the often more closed states in the area. Bahrain has traditionally a relatively free press, with newspapers in several languages. Craft traditions are maintained, including boat building, weaving and ceramics.

Bahrain has the oldest education system in the Gulf area, established in 1932. Basic education is free, and the country has several higher education institutions, with two universities. There are several museums, including an internationally renowned Koran museum; others document the country’s early role in petroleum extraction and pearl fishing. Football and equestrian sports are the most popular sports, and Bahrain is also the organizer of the Formula 1 race.