Feel like traveling to Japan? Get to know Tokyo’s main attractions and learn about the capital of one of the world’s greatest powers!

Tokyo is a vibrant, intense city with many cultural contrasts, with landscapes that make up true postcards. Its rich history, ancient temples and monuments, as well as the beautiful sights and the exotic cuisine, have increasingly aroused the interest of Brazilians. 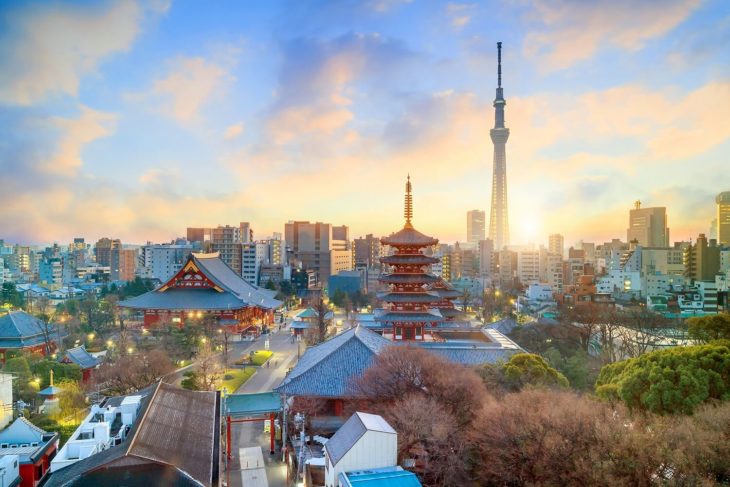 As if that were not enough, the tourist still finds a lot of technology, modern buildings, bright signs everywhere and bustle. The city doesn’t really stop! In Tokyo, tradition and culture blend with a futuristic and promising setting.

Thinking about it, we will present the main characteristics and particularities of Tokyo. So you can create your script with all the information you need to enjoy this city with more comfort and convenience. Good reading!

What are the characteristics of Tokyo?

Tokyo is the capital of  Japan. It is a true megalopolis, that is, a large well-developed region and one of the most important in the world. Modernity and urban development are hallmarks of this city.

Religious temples and millenary monuments blend with the grand skyscrapers and a diverse transport network, such as state-of-the-art trains and subways. Thousands of people roam the streets of Tokyo every day, but still popular organization and education prevail.

The climate of the city has well marked and intense seasons. During summer, temperatures can reach 30 ° C, but thermometers drop dramatically to 5 ° C in winter (and even reach negative levels).

To disembark at the airport, you must present a   valid passport and   travel visa, which can be applied for directly on the Japanese consulate website.

What are major attractions in the capital of Japan?

Tokyo offers numerous attractions for Brazilian tourists, and everything in the city is very intense. Here are some options for sightseeing that you should not miss while in the area. Pay attention to our tips and write it all down in your travel itinerary, combined?

Meiji Jingu is a Shinto religious temple set within a forest in Shibuya’s Yoyogi Park. Founded in 1920, the sanctuary impresses with its inner beauty and surrounding landscape, which is fully wooded and with trails for hikers.

Many people come to the place to learn more about the history and culture of the country. Thanks to this monument, you can enjoy moments of recreation, tranquility and relaxation in central Tokyo.

Get to know Tokyo Skytree

This attraction is a broadcasting tower considered the largest structure in all of Japan (and the second largest in the world, second to Burj Khalifa in the United Arab Emirates). The building stands approximately 635 meters high and was designed with the most advanced technology features to withstand earthquake and other eventualities that are quite common in Japan.

Go to the Imperial Palace

The  Imperial Palace has been considered the official residence of the Emperor of Japan and his family since 1888. The building features typical Japanese architecture, with red roofs and still standing walls.

It is not possible to visit the interior of the palace, only to make a guided tour in some rooms. However, tourists can be enchanted by the gardens and lake outside (Imperial Palace East Gardens).

This tourist spot is in Taito district and is well known for hosting typical and popular celebrations of the country, such as Hanani parties . This is a great choice for those seeking contact with nature or wanting to get out of the hustle and bustle of Tokyo.

The park is public and admission is free for all. There is still a zoo, as well as several temples and museums in the surrounding area, such as the Tokyo National Museum, the National Science Museum and the Tokyo Metropolitan Art Museum.

Senso-ji Buddhist Temple (known as Asakusa Kannon) is located in Asakusa, a historic district of Tokyo. The building was inaugurated in the year 645 and dedicated to the goddess of mercy Kannon.

It is the oldest temple in the city and a true haven for those seeking tranquility and quiet away from the bustling Japanese capital. In addition to the temple itself, there is a five-story pagoda and a smaller temple complex with lakes, gardens, shops and a variety of dining options for tourists.

The Rainbow Bridge was inaugurated in 1993. The building is 570 meters wide and 918 meters long, from where you can see some famous sights, such as Tokyo Bay, Tokyo Skytree, Odaiba Waterfront and even Mt. Fuji The name “rainbow bridge” comes from the colorful lamps that illuminate the site and work by capturing solar energy during the day.

Shinjuku Gyoen is a large park located in the Shinjuku and Shibuya neighborhoods. The site has an approximate length of 58.3 hectares and is currently under the administration of the Imperial House of Japan Agency.

The garden brings together various visuals, such as the French and English landscape in the north and a conventional Japanese garden in the south. There are over 100,000 trees, such as white magnolias, cherry trees, hydrangeas, olive trees and gardenias. The environment is very beautiful and worth knowing.

As you have seen, Tokyo is a multicultural city: modernity and tradition of ancient culture live side by side. Definitely, you can’t miss visiting Japan at least once in your life. Remember: the country is emerging as one of the great world powers of the century.