In the time after Tsubouchi and Futabatei, the novel had been modernized in the direction of realism and naturalism. After the Russian-Japanese war, literature became more involved in social issues, and the influence of French and Russian naturalism became particularly noticeable. Henrik Ibsen and August Strindberg also had influence in some circles, including in feminist movements represented by the journal Seitō ( Blåstrømpe ) and Hiratsuka Raisho (1886–1971). Toson left poetry and wrote the groundbreaking naturalistic novel Hakai (The Broken Commandments, 1906), where the problems of Japan’s pariahs eta was recorded. 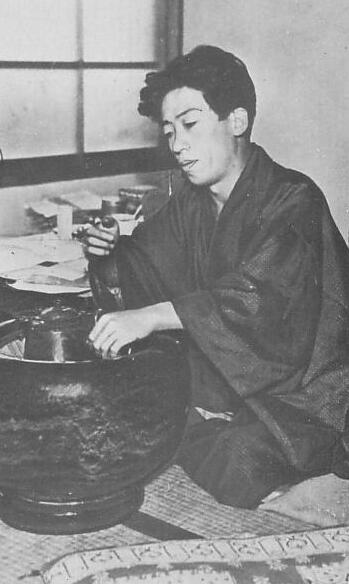 The reaction to the rapidly dominating naturalism can be traced in the established authors with Sōseki Natsume (1867–1916) in the lead. As one of Japan’s biggest contemporary writers, Sōseki brings to life the pain of Japanese modernization, the struggle between the old and the new. Sōseki was part of the literary environment around the journal Hototogisu, where he debuted with the satirical novel We Are a Cat at the age of 38. The breadth of his writing, from the early humorous and satirical works and a haiku- like novel, to the more western realistic novelstowards the end of his career, demonstrating his willingness to experiment with different writing techniques of both Japanese and western origin. His most famous later works are the trilogy Sanshirō, Sore kara (Then) and Mon (The Gate, 1908–10) and the incomplete work Meian (Light and Darkness, 1916).

Influenced by Sōseki, who sought to restore the ethical value of literature, several authors published the journal Shirakaba (Bjørken, 1910–1923). Mushanōkoji Saneatsu (1885–1973), who was heavily influenced by Lev Tolstoy, led the group and wrote novels such as Kōfukumono (The Happy Man, 1919), which was a contribution to an ongoing debate about the formation of an idealistic collective. This was founded by members of the Shirakaba circle in 1918 to prove that a better society was possible without socialist revolution. Another important member of the circle was Naoya Shiga(1883–1971), who perfected the intensely personal Shishōsetsu style. With his confident style, Shiga succeeded in freeing the Shishōsetsu literature from the pessimistic determinism of naturalism. Among his best-known texts within the genre are the short novel Wakai (The Atonement, 1917) and the novel (An’ya kōro Dark Night’s Journey, 1921). Takeo Arishima (1878-1923) is also regarded as a member of the Shirakaba School of Humanities.

The neo-romanticism was another important flow under the noticeable aesthetic influence of Europe. Kafū Nagai (1879–1959) wrote melancholy, nostalgic tales from the dwindling Edo, such as Sumidagawa (Sumida River, 1909). Jun’ichirō Tanizaki (1886-1965) sought beauty and aesthetic values ​​in exotic eroticism by drawing inspiration from both Western modernity and traditional Japanese aesthetics. Chijin no ai (A Fool’s Love, 1925) illustrates the former, while the main work Sisters Makioka, the novel “ A Tattoo” (1910) and his translation into modern Japanese by the classic The Story of Prince Genji are examples of the latest.

Kan Kikuchi (1888–1948) claimed that there were no social classes in the art, and wrote a number of popular and melodramatic works that achieved rapid commercial success. He launched the literary magazine Bungei shunjū (Literary Seasons, 1923–), which eventually got a larger circulation than any previous magazine. He created Ryūnosuke Akutagawa’s Literary Award (1935), one of the most prestigious literary awards in Japan today, in memory of his friend who committed suicide in 1927.

Riichi Yokomitsu (1898–1947) and Yasunari Kawabata (1899–1972) called themselves “sensualists” and were in a tense relationship with both left-wing circles and naturalist “traditionalists” in their search for new forms of expression. Kawabata debuted with Izu no odoriko (Dancer from Izu, 1926). Inspired by European avant-garde literature, he experimented with surprising images and sudden transitions. Osamu Dazai (1909-1948) introduced a new style in the I novel. In the latter half of the 1930s, the literature was marked by the progress of nationalists in the form of increasingly censoring schemes. In 1942, the authors were ordered to enroll in a state-controlled, patriotic association.