Saudi Arabia is the home of Islam. Here are the two most holy places of the Muslims: Mecca, where Prophet Muhammad was born, and Medina, where his grave is located. Islam is state religion and the only religion allowed to be practiced by Saudis. The vast majority confess to a Sunni Muslim and very strict interpretation of Islam.

Foreigners belonging to other religions are only allowed to practice these privately. Foreign Christians who tried to mission have been arrested and there are also reports that Christians were executed after illegal prayer meetings. 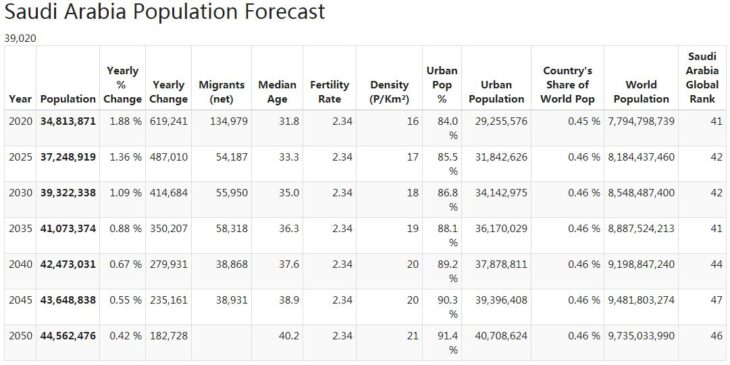 About 85 percent of Saudis are Sunnis and the majority follow a literal form of Islam, Salafism (or Wahhabism, see Ancient History). It is an orthodox interpretation of Islam that requires total faithfulness to the Qur’an and to the Prophet Muhammad’s words and actions. This characterizes society, both private and public.

Religious scholars, unleashed, with official approval have great political influence (see Political system). The justice system often awards punishments for crimes against religion, such as blasphemy or apostasy (denial of faith). The Morality Police (al-mutaww’in), among other things, monitors that prayer is performed at the right times, that women wear a veil and that men and women are kept separate in public life. In recent years, the influence of moral police has diminished.

Around 15 percent of the population is estimated to be Shi’ite Muslims. According to Wahhabite doctrine, the Shiites are not genuine Muslims, many Sunni Muslims regard them as lower standing than Christians and Jews. In the eastern part of the country, Shiites are in the majority, with a particularly large concentration around the city of Qatif. In recent years, dozens have been killed by security forces there and many have been arrested in connection with unrest.

Islam means “surrender” or “submission”. For the believer, Islam permeates everything in life. God (“Allah” in Arabic – the word is also used by Christian Arabs) is considered to speak through the Qur’an. Five times a day at certain times, the believer should pray, turn to Mecca. In Ramadan, the ninth month of the Muslim year, Muslims fast from sunrise to sunset. Every faithful Muslim who can be expected to make a pilgrimage to Mecca and the shrine of the city Kaba at least once in his life. In recent years, about two million people have participated in the haulage, hajj, of which around two-thirds come from other countries. In the congestion, accidents have occurred that have claimed the lives of many pilgrims (see Modern History) and a ceiling is set for the number of pilgrims each year.

Muslim timing is based on the emigration (hijra) of the Prophet Muhammad from Mecca to Medina in 622. The Islamic year is based on the lunar cycle, the twelve months have 29 or 30 days, and therefore the year is ten to eleven days shorter than the solar year.

Through the Muslim World Federation, Saudi Arabia has for decades financed Islamic missionary activities throughout the world, including Quran translations, schools and mosque buildings, for example in Sweden.

More convicted and many arrested for terrorist offenses

During the month, three people are sentenced to death for terrorist offenses, and over ten others are sentenced to long prison terms – up to 33 years. Authorities also state that 135 people have been arrested for terrorist crimes, of which 26 are foreigners – most from Syria. The arrests must have happened in recent times, but it is unclear exactly what time period they are in.

Seven Shia Muslims are shot to death by unknown men as they gather to celebrate a Shiite religious celebration in Hasa in the east. During the month, almost 80 people are arrested on suspicion of the act. According to the authorities, this was probably carried out on orders by IS.

Fawzan al-Harbi, one of the founders of Acpra (see March 2013), receives ten years’ imprisonment, followed by a 10-year travel ban.

Additional death sentences for protests during the Arab Spring

Every few days, the leading Shi’ite imam Nimr al-Nimr and two more Shi’ites are sentenced to death. Nimr was a driving force behind the regime-critical protests in 2011. The court finds that he was a representative of a foreign power (read Iran), failed to obey the authorities and took up arms against the country’s security forces. The other two are convicted for participating in demonstrations that triggered unrest in the East and for shouting regime-critical slogans. The judges trigger protests both in the country and abroad (see also May 2014).

Saudi Arabia participates in air strikes against IS in Syria

The country, along with other states in the region, has pledged to support the United States ‘fight against the terrorist sector also by stopping recruits trying to get to IS via the countries’ territory. They have also pledged to stop money grants to IS.

Renowned human rights activist and lawyer Walid Abu al-Khair is sentenced to 15 years in prison for incitement. Among other things, the lawyer has made a critical statement about the anti-terror law introduced in February. In 2013, he was sentenced to a shorter sentence for criticizing the authorities and demanding political reform. Walid Abu al-Khair is also known as a lawyer for blogger Raif Badawi, who in May received a sentence of up to ten years in prison.

Thirty-three people who have been detained since 2006 are sentenced to imprisonment for up to 30 years, after being found guilty of forming a terrorist cell.

Many convicted of protests during the Arab Spring

Two Shia Muslims are sentenced to death for participating in regime-critical protests in the eastern part of the country during the Arab Spring of 2011. They are sentenced, among other things, for rioting, for carrying weapons and for throwing bombs at the police. It is not clear if anyone was harmed by the doomed acts. These are the first death sentences to be issued for participation in the uprising. In June, two more Shia Muslims are sentenced to death and a third to 25 years in prison. In the same month, five youngsters are sentenced to between 3 and 6 years in prison for taking the country’s flag out of a school building and replacing it with a Shiite banner.

Many are convicted of the 2003 terrorist wave

During the month, a large number of people are sentenced to long prison sentences for participating in the wave of terrorist attacks that shook Saudi Arabia from 2003 (see Modern History). Nine people are sentenced to death, including Faris al-Zahrani, who is believed to have been the chief architect of the attacks. In recent months, hundreds of people have been brought to justice for crimes related to the wave of terror. In November, another three are sentenced to death for involvement in the death, and five receive long prison sentences.

Atheism can give 20 years in prison

The penalty for those who do not believe is laid down in a royal decree.

Deputy Prime Minister Prince Muqrin bin Abd al-Aziz, 69, is appointed Deputy Crown Prince. This means that he is next in line to succeed King Abdullah after Crown Prince Salman who is said to be ill. Prince Muqrin has previously been head of the Saudi intelligence service and, like Salman, is half brother to King Abdullah.

In addition to the Muslim Brotherhood, the authorities also classify two groups involved in the civil war in Syria as terrorist organizations: the al-Nusra front with ties to the al-Qaeda terror network and the group later called the Islamic State (IS).

Saudi Arabia, Bahrain and the United Arab Emirates call home their Qatar ambassadors, who they accuse of having embarked on the countries’ domestic policies. Relations between Qatar and other countries in the region have deteriorated since the Arab Spring of 2011 due to Qatar’s support for the Muslim Brotherhood, which the other countries see as a security threat. Only in November will the ambassador be sent back to Doha.

The head of the intelligence service is replaced

In its efforts to support the rebel side in the Syrian civil war, Saudi Arabia dismisses its head of intelligence service Prince Bandar bin Sultan, who has backed the Washington government. He is replaced by the Interior Minister, Prince Mohammed bin Nayef.

King Abdullah issues a decree stipulating that anyone belonging to a terrorist organization can be sentenced to prison for up to 20 years. The law also applies to those who participate in battles abroad. Amnesty International criticizes the law, stating that its broad definition of terrorism can be used to stop peaceful political protests. Among other things, it is prohibited to carry out acts that are considered to disturb public order, threaten national unity or damage the reputation of the state. The Ministry of the Interior is also given extensive powers to give orders without probation regarding house searches and arrests. A list is published of which groups are considered terrorist organizations, among them the Muslim Brotherhood and the Syrian Nusra Front.