Bangladesh is a republic in South Asia that consists essentially of the delta areas of the Ganges and Brahmaputra rivers. India encircles the country on all sides except for a small area to the southeast where Bangladesh borders Myanmar (Burma).

Bangladesh is among the world’s most densely populated countries and at the same time one of the world’s poorest and least developed. It is very prone to being hit by floods and cyclones, and has been hit by countless disasters.

After belonging to British India, Bangladesh became part of the state of Pakistan in 1947. A civil war in 1971 led to Bangladesh being proclaimed an independent republic.

Bangladesh encompasses the eastern part of Gangessletta. The Ganges and Brahmaputra rivers, which at the border with Bangladesh, are named Padma and Jamuna, as well as Meghna, characterize the landscape. Bangladesh is easily affected by events in Ganges’ and Brahmaputra’s upper races in India and China.

The deposits from the large rivers provide a rich soil. In the southwest lies the almost unpopulated Sundarbans, the largest mangrove belt in the world, with almost impenetrable forest. In the Sundarbans, a national park has been established that extends into India. Here, among other things, are Bengal tigers.

Decommissioning of forests has meant that the rivers are both more water rich and carry more sludge than before. The rivers have become shallower, and the country is experiencing more severe flood damage more often than before. Bangladesh will be severely exposed if the ” greenhouse effect ” leads to higher water levels in the world seas.

With a population of 156.6 million (2015) distributed over 144,000 square kilometers, the population density is high and the population pressure is high. High birth and death rates have resulted in a very young population. A large part of the population lives in the vast delta areas, which are close to the rivers.

Bangladesh (and Indian West Bengal ) has long been a crucible for various peoples and cultures. People from Myanmar, Himalayas, Dravids, who were the original inhabitants of the Indian peninsula, and Aryans formed the first amalgamation. With the moguls came people from all over the Islamic world.

About 90 percent of the population are Muslims, while about ten percent are Hindus. When East Bengal was separated from India in 1947, there were religious dividing lines.

The official language is the Indian language Bengali, which is the mother tongue of about 98 percent of the country’s population. Minority languages ​​are Urdu and Tibetan-Burmese languages spoken in the border areas against Myanmar. English is used as a language of assistance. 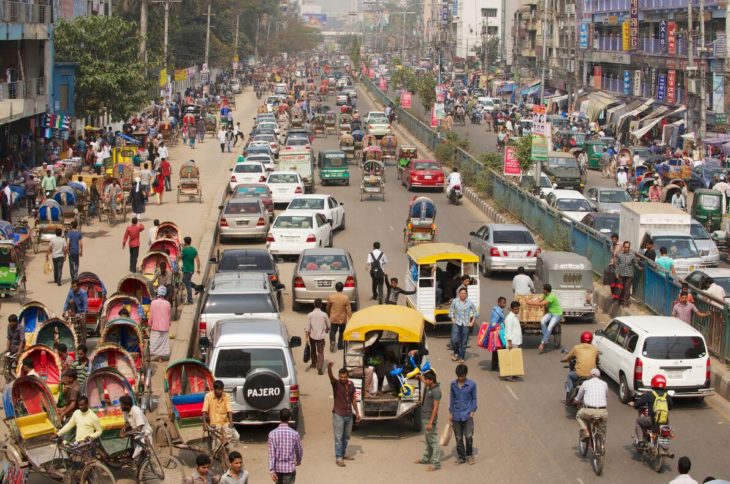 Bangladesh is a parliamentary democracy and a united republic. The Constitution is from 1972. The National Assembly, Jatiya Sangsad, has 300 members elected directly in individual circles for five years. The country is divided into six provinces.

The military has played a significant role in politics. Social tensions, including frequent strikes, also characterize the country’s politics. Disputes with neighboring countries India and Myanmar have also seemed destabilizing, as have attempts to dissolve in the Chittagong Heights in the east.

Bangladesh is largely a moderate Muslim country, but there are fundamentalist currents. Islamic extremists have been behind a number of bomb attacks in recent years.

Bangladesh is a member of the UN and the UN’s special organizations, including the World Bank and the World Trade Organization, as well as the Commonwealth.

As part of the Bengal region, the present Bangladesh from around the year 700 belonged to a larger Buddhist kingdom. It was conquered by Muslim invaders in the 12th century and ruled by local Muslim dynasties in the following centuries, and incorporated into the mogul kingdom in 1576. The British East India Company gained control of the area in the 1760s.

By India’s division, in 1947 Bangladesh was separated from the Indian and Hindu part of Bengal and subject to the new state of Pakistan as one of five Pakistani provinces named East Pakistan.

A bloody civil war broke out between East and West Pakistan, and India intervened on East Pakistan’s side. After a brief war, Bangladesh gained its independence in December 1971. During the civil war, between eight and ten million people fled to India.

The country’s short history has been marked by military coups and strong unrest, with several coups and political assaults.

Since independence in 1971, Bangladesh has made significant economic and social progress. The country is now more self-sufficient in food, population growth has been reduced, the education situation has improved and dependence on aid has been reduced. Yet over a third of the population still lives below the poverty line.

Prosperity growth for the poorest is very slow, and Bangladesh is still among the world’s poorest countries. The rapidly rising food prices are a major problem for Bangladesh, where food security is initially vulnerable.

Agriculture is the dominant trade route. Since 1977, a privatization policy has been implemented. Unlike many other low-cost countries, Bangladesh has received relatively small foreign investment, partly because of its political turmoil. The country is one of the world’s leading suppliers of raw jute.

Investments are primarily made in the natural gas sector and in the tax-free export zones (EPZ). The country has significant gas resources that can provide opportunities for future revenues.

Bangladesh has a rich and diverse culture, with strong influence from Muslim, Hindu and Buddhist traditions. Linguistically and culturally, Bangladesh has much in common with the Indian state of West Bengal, which borders Bangladesh in the southeast.

Bangladesh has long traditions in dance, music and ceramics. Traditional music is characterized by instruments such as bamboo flute, wooden drums, stringed instruments and rhythmic instruments. The country has many cultural monuments, both Buddhist and Hindu temples and Muslim mosques.