Craft in Japan is at a high level, in particular to the work in lacquer, metal and ceramics. Objects in the famous treasury Shosoin show that the painting was already very high in the 600s. For fine work, the lacquer was added with real gold or silver dust, and the design varies from painting to relief (see inro ).

There are few countries where the craft has such a high reputation as in Japan. Occasionally, older artisans with a high reputation are given the status of “national treasure”, a honor that few artisans in other countries are in for. The Japanese crafts then also have long traditions to build on. Already during the Jomon period (c. 12,000–300 BCE) artistically designed ceramics were performed. In the subsequent periods, Yayoi (c. 300 BCE – c. 300 BCE), Kofun (c. 300–600) and Nara (646–794), the influence of Korean and Chinese crafts became increasingly strong. This included ceramic, lacquer, metal, glass and textile work. Good examples have been preserved in the imperial treasury of Shosoin. 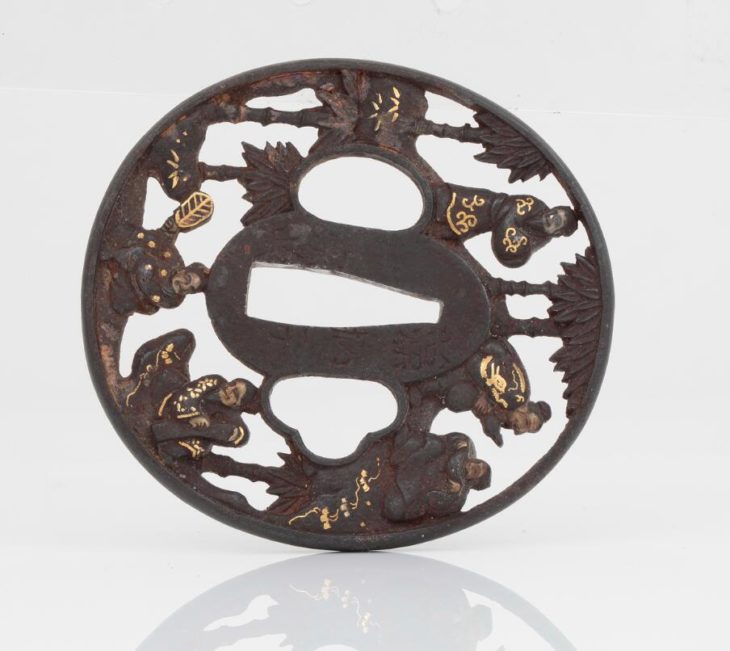 In the Fujiwara era (898-1855) a special form of lacquer work was developed called maki. Armor, sword and sword ornaments (see tsuba ) are among the finest works. At the beginning of the 13th century, a ceramic industry in Seto emerged, influenced by the tea ceremony, but from 1580 Kyoto became the center of such work, most often stoneware with lead glazes. Porcelain was made from the 16th century according to Chinese and Korean models, largely for export. Quite distinctive for Japan are the small belt buttons, netsuke, which gave rise to a miniature sculpture of high artistic quality.

During the Heian period (795–1185), however, a pure Japanese style emerged. It was particularly evident in the lacquer works and in metal works such as bronze mirrors. The textiles had colorful patterns that had their examples in the painting. During the Kamakura period (1185–1333), gold varnish was widely used for articles of furniture as well as for furniture and other interior details. In the art of metal, it was especially swords and armor that reached a high level at this time. The stone estate developed further at the six ceramic stoves in Sto, Yokoname, Bizen, Shigaraki, Echizen and Tamba. Seto started approx. 1230 to copy the Chinese ceramic types jianyao, celadon and quinbai. 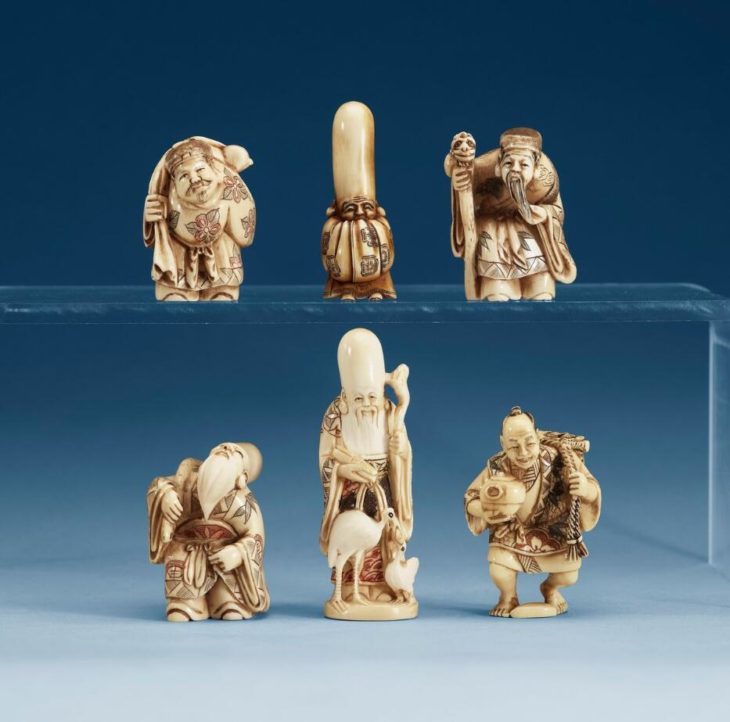 During the periods Muromachi (1333–1572) and Momoyama (1575–1615), excellent artisans worked with varnish and metal (including weapons). It was during this period that the tea ceremony came to Japan from China. It led to a new production of earthenware for use in this ceremony. Well-known ceramic types are Shino, Oribe and Raku.

The Edo period (1615-1867) was a rich and productive period for the arts. This is primarily because it was a long, peaceful period. Edo (now Tokyo) and Kyoto became artistic centers. In addition to stoneware production, porcelain was also started after a Korean found kaolin near Arita on Kyushu Island in 1616. Initially, the Korean blue-white porcelain was imitated, but soon the Chinese blue-white and over-glazed Quing porcelain dominated source of inspiration. Imari, Kakiemon, Nabeshima and Kutani porcelain were the foremost types. 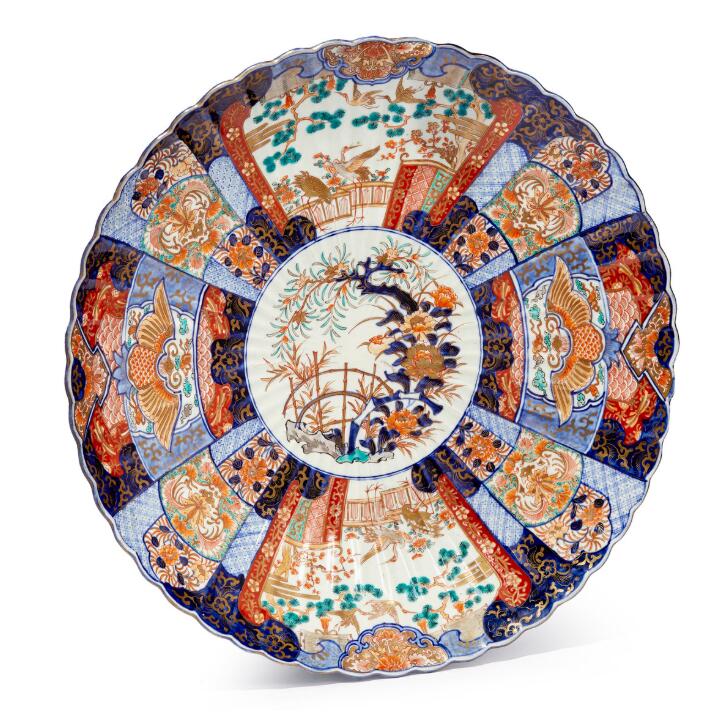 During the World Exhibition in London 1862, the European public caught the eye of Japanese crafts for the first time. Japan’s participation was not a state initiative, but was organized by Sir Rutherford Alcock, Britain’s first diplomat to Japan. Bronze and enamel works were exhibited. 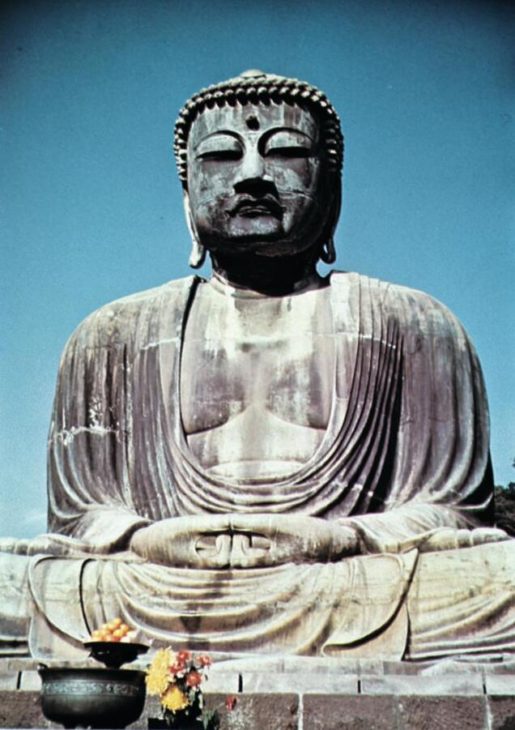 The 15 m high Amida Nyorai Buddha in bronze, near Kamakura (about 1250). The image is taken from the paper lexicon Store Norwegian Lexicon, published 2005-2007.

During the World Exhibition in Paris 1867 the variation was greater. This time it was the Japanese government that was behind the participation. Paintwork, pottery, silk and woodcuts dominated Japan’s exhibition. The pottery and woodcuts made a huge impression on artists and potters. The fascination was intense and the influence so enormous that it resulted in the style influence called japonism.

At the end of the 19th century, a ceramic type was produced with rich decor in gold and powerful colors, the Satsuma ceramics. This was especially exported to Europe.

Between 1914 and 1931 Japan became heavily industrialized. This was especially true of the craft. In 1926, Soetsu Yanagi, Kanjiro Kawai and Shoji Hamada started the Japanese folk art movement. Its task was to preserve and develop the knowledge of the traditional arts and crafts. The work has borne fruit, and today the Japanese handicraft is flourishing. In 1972, The Japan Foundation was established. The purpose is to disseminate Japanese culture internationally. The organization has 25 offices worldwide. Important is the participation in international exhibitions, showing the breadth of Japanese culture.