Mongolia is a typical high plateau with an average height of 1,580 m above sea level, the capital Ulaanbaatar is 1,350 m above sea level. The highest point, the Khuiten in the Tavan Bogd Mountains in the Mongolian Altai, protrudes at 4,375 m into the eternal snow, the lowest point is marked at 532 m above sea level. M. the “Blue Lake” in the east of Mongolia.

Two thirds of the Mongolian territory have no runoff into the oceans. The continental watershed of Asia runs through the country from the Mongolian Altai over the Tannu-Uul Mountains, the Khangai and Eastern Mongolia to the Khingan and separates the drainage areas to the Arctic Ocean and the Pacific Ocean from the Central Asian inland drainage area.

According to a2zgov, the surface of Mongolia is characterized by impressive diversity – impenetrable forests, high mountains, rivers, lakes and forest steppes in the north and north-west, wide treeless steppes, desert steppes and deserts in the east, south-east and south, eternal ice and numerous glaciers in the high mountain regions of the Mongolian Altai, which separates itself from the Russian Altai in the extreme northwest and merges into the Gobi-Altai in the southeast. In the Mongolian Altai, apart from deserts and mountain taiga, all the landscape zones occurring in Mongolia can be found: desert steppe, steppe, mountain steppe, mountain forest steppe and the alpine high mountain region. Some of Mongolia’s largest rivers such as the Khovd, Buyant and Bulgan are fed by hundreds of small springs in the Altai.

The deepest point in the basin of the Great Lakes in the northeast, which actually consists of three partial depressions, is filled by the largest salt water lake in Mongolia, the 3,350 km² Uvs-Nuur. Deserts, salt marshes and dune fields determine the image of the landscape, the extra-tropical deserts of the earth penetrate the furthest north here. The character plant is the small desert and desert steppe tree Saxaul. The depression zone continues in the south-east in the valley of the Gobi Lakes. Here are small, drainless salt and freshwater lakes, the area and depth of which can vary greatly depending on the inflow of the Khangai rivers. Here, too, desert steppes and deserts predominate.

The central mountainous landscape of Mongolia is the Khangai, which extends over 750 km from the Great Lakes Basin in the northwest to the Khalkh Plain in the east. The main ridge reaches average heights of up to 2,600 m in the east and up to 3,400 m in the west. Only the summit of the highest mountain in the Khangai at 4,021 m, the Otgontenger, also the seat of the Mongolian protective deity Ochirvaani, is constantly covered with snow.

While the rather rocky south side of the Khangai is almost forest-free, the north side with larches and birches as well as a rich population of herbs, grasses, edelweiss and gentian belongs to the mountain forest steppe.

In the north lies the Khuvsgul mountainous region, which is rich in forests and water and in some places difficult to access. Its highest mountain ranges rise north and west of the 2,620 km² Khuvsgul Lake, the largest freshwater lake in Mongolia. To the north of the Khangai Mountains and south of the Khuvsgul Mountains lies the Selenge-Orkhon Mountains. It is thanks to a dense network of waterways with the two largest rivers in the country – Selenge and Orkhon – that the most productive arable areas in Mongolia can be found here.

The third major mountain range after Altai and Khangai is the Khentiigebirge with the Onon mountainous region. It begins east of Ulaanbaatar and extends into the great eastern plain. Various elevations reach 2,500 meters, the highest mountain in Khentii is Asralt Khairkhan with 2,799 m with traces of earlier glaciations.

The Khentii is mainly covered with larch taiga – “Here is the animal kingdom, humans are only guests” – and lighter larch forests, in the east and south steppe areas dominate.

In contrast to western Mongolia, the east is flat and level. Only in the north do the foothills of the Trans-Baikal Mountains reach Mongolia. The Khentii Mountains with the Onon Mountains are the lowest mountains in Mongolia.

The foothills of the Khingan foothills protrude into the extreme eastern tip of Mongolia. Mountain forest steppes are rare, sand fields as well as grass and herb rich mountain steppes dominate.

The landscapes south of the Mongolian and Gobi-Altai, on the other hand, offer only a few oases, gravel, gravel and clay deserts. In the Gobi-Altai, near the Nemegt Mountains, 300 km west of the aimag center Dalanzadgad, scientists found almost completely preserved skeletons of predatory dinosaurs, herbivorous dinosaurs and giant lizards in deposits from the Cretaceous period.

Mongolia is very rich in natural resources – coal, lignite, iron ore, nonferrous metals, gold, silver, phosphate, fluorite, oil, uranium, salt – but only since the late 70’s of the last century was a significant mining industry, which after the turn of the millennium and with the discovery and exploitation of further huge coal, gold and copper deposits in the South Gobi meanwhile advanced to the engine of the rapid economic growth. 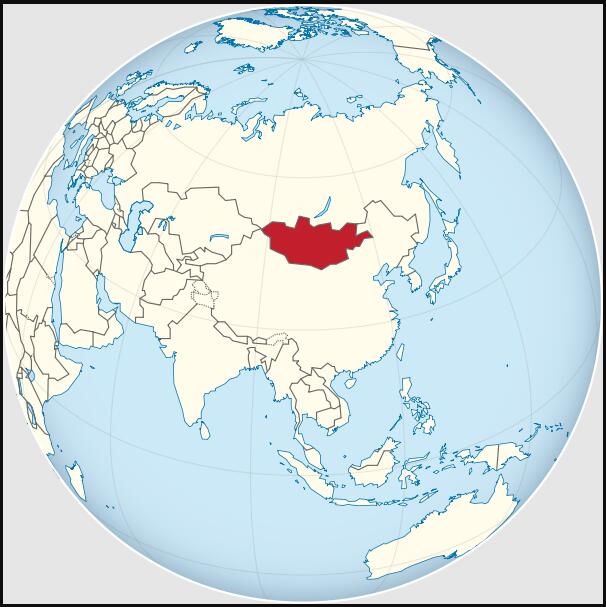