The imperial court music, gagaku, was developed in the 700s under Chinese and Korean influence. Gagaku is bound by strict rules with no room for improvisation. The musicians’ location and costumes are carefully prescribed and based on Confucian ideas. The instruments are sho (mouth organ with 17 bamboo tubes), the short oboe hichiriki, the 4-string lute biwa, a 13-string sither (so or koto) and a metal bell, shoko. The musicians on the left are led by the beats of a cylindrical drum (kakko), those on the right of a larger, suspended drum (taiko). Originally, gagaku was intended for banquets, but was used at all imperial ceremonies and ritual dances. It is now available to the general public.

The Japanese religion shinto has its own temple music, kagura. This includes gagaku, but also contains other elements, including instruments depicted on tomb sculptures from 200-500 AD Buddhism’s music is imported from India and China, but has developed its own Japanese form.

Actors in the no-theater recite in a peculiar singing style to the accompaniment of musicians (flute, a small and large hourglass drum, and cylinder drum on a tripod). The drummers control the stakes by call. There is no room for improvisation in this music either. 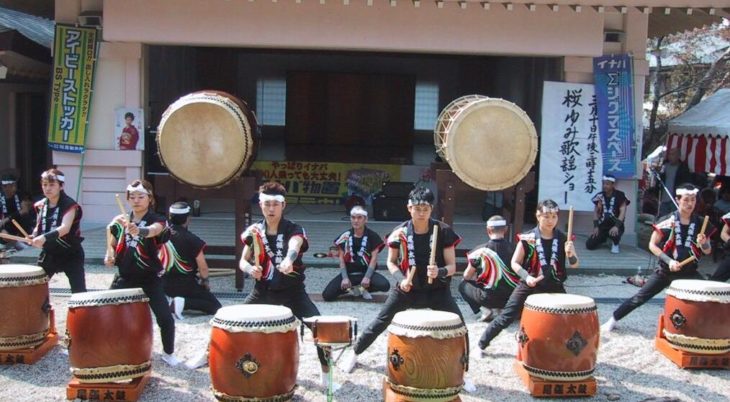 In the Edo period (1603-1868) various forms of instrumental music flourished. Biwa, which had long been used to accompany long narrative poems, was replaced by the shamisen, a three-stringed song played with a large plaque. The most popular wind instrument was shakuhachi, an edge-blown whistle especially used by a sect of wandering Buddhist monks. Shakuhachi music requires an advanced breathing technique and is a highly refined utilization of the various sound possibilities in the instrument.

Koto, a 13-string sither with movable chairs, is played with three-finger pickers on the right hand, while the left hand is used to move the chairs and press the strings on the left side of the chair to achieve vibrato or lowering and raising the tone. The music for koto consists mostly of danmono, which is a form of variation. It is also used as accompaniment to song.

Koto was an old instrument, introduced from China, but during the Edo period it became especially popular and was also used with the Shamis. There was a form of chamber music, in which singing alternated with instrument interplay (jiuta). The instruments can be koto, shamisen or shakuhachi, or all three. The Shamisen also made their way into the Kabuki Theater. The musicians (flute and drums) perform here either on stage or hidden behind a bamboo wall.

The national anthem is related to work (fishing, rice planting), dance and holidays. It is sometimes accompanied by the shamis, shakuhachi or drum. Otherwise, different rhythm instruments are used. The Aino’s on Hokkaido and the Okinawa’s on the Ryukyu Islands have their own forms of folk music, which are partly related to the Japanese.

Japanese music prefers delicate instruments and refined details. The Japanese paint their instruments to mute the sound, and use strings of silk instead of metal.

During the Meiji period (from 1868) and especially after the Second World War, Japan has gone in to cultivate Western music. Musicians are trained with almost perfect technique, and Japanese symphony orchestras, chamber ensembles and opera scenes have a very high standard. Many Japanese musicians have gained international recognition, e.g. conductor Seiji Ozawa, pianist Mitsuko Uchida and violinist Midori.

Modern Western European music (the Darmstadt School) incorporated instruments that had long been used in Japanese music, so it was easy for young Japanese composers to learn the new principles of compositional engineering. Several of them sought to combine Western music with Japanese traditions, and have created music that has aroused interest in the West. Japanese composers include Yoshiro Irino, Sadao Bekku, Y. Aikio, Ikuma Dan, Toshirō Mayuzumi and Toru Takemitsu.

Especially in modern popular music, influences from the West have been very strong, and Japan has a large number of rock and jazz musicians who hold a high level. Perhaps the best known name in the West is Ryuichi Sakamoto, who is both an executive musician, composer and film actor. Otherwise, the Japanese market for western music of all kinds is immensely large and attractive. The Japanese have also gained entry into the market for musical instruments (the companies Nippon Gakki, which produces Yamaha pianos, and Kawai Gakki), both acoustic and, not least, electric and electronic.