The first inhabitants of Mongolia seem to have been the Avars, originating in Central Asia. In the early fifth century they formed a nomadic nucleus. They were followed by the Tukue. In 1167 the most daring of the Mongols was born: Temugin, that is Genghis Khan, which means “universal prince”.

According to Abbreviationfinder, an acronym site which also features history of Mongolia, the different tribes fought each other fiercely to keep their cattle on the best pastures, but when Genghis Khan was elected head of all Mongols, he managed to keep them united and defend them from external attacks.

In the early 13th century, the Mongols began a series of conquests, all of which remained memorable. Thanks to their great ability to mount horses and use the bow, they soon terrified all the neighboring peoples. And they were everywhere, in China, Turkestan, Afghanistan, Persia, the Caucasus and southern Russia. And where they got there, devastation was assured. They hit, killed and looted. Later, under the guidance of Ogodai, the son of Genghis Khan, they went as far as Moscow, Kiev, Hungary and even went as far as the shores of the Adriatic. Under the Kubulay empire, Mongolian rule reached its maximum extent and power. The capital was Beijing.

When the Russians and Chinese joined together to reject them, the Mongol empire began to decline.

From the end of the 17th century to 1911 Mongolia was a vassal of China. From 1911 to 1921 it was a semi-autonomous state, subjected to the Russian Protectorate. Then, on July 10, 1921 it was erected in the People’s Republic on the type of the Soviets.

From 6 January 1931 it was divided into 17 “aimag”, that is economic-administrative units.

By opposing the economic and military agreements with the Soviet Union, Japan sought to awaken Mongolian nationalism through the government of Man-Chu Kwo, and within Mongolia it managed to have some results.

But not enough and the country in 1940 had a new Constitution. He continued his collaboration with the Soviet Union and supplied it with food and livestock during the Second World War. On October 20, 1945, after the war, a plebiscite was called in the country with which independence was chosen. The Soviet Union renewed all friendship, collaboration and assistance agreements with the young state. Since, however, Mongolia besides Moscow had no diplomatic representation abroad, when in 1947 he asked to join the United Nations, he was denied the request.

The main one who opposed this entry was China who feared the young republic’s claims on the territories of which China claimed ownership.

However, under the influence of Soviet policy, Mongolia had a marked improvement in its socio-economic-cultural situation. But the progressive advance of the country could not be attributed entirely to the Soviet Union since Mongolia also entered into agreements with the United States, which made great aid, and with China, with which in 1959 it entered into an economic treaty, friendship and mutual assistance.

Despite the importance attributed to industries and agriculture, the Mongolian people always maintained a sense of nomadism and privileged cattle breeding, moving around the country and considering state-owned collective companies such as factories and transit stations.

In recent years, Soviet influence in Mongolia increased and China knew that any attempt to change the course of its policy would be rejected.

In 1961, thanks to the Soviet interest, Mongolia became part of the United Nations and in 1962 of the Comecon. Mongolia had distanced itself from China to such an extent that, in 1963, veteran premier Ju Tsedenbal in two speeches, one held in the capital Ulaanbaatar and another in East Berlin, addressed almost exclusively against the ideology of Maoism.

Yet relations with China were never interrupted and indeed Mongolia always availed itself of its aid, as well as of Soviet aid, for the continuous development of the country. All this lasted until 1966 when, on the occasion of Brezhnev’s visit to Ulan Bator, China withdrew the large contingent of Chinese workers and technicians from Mongolia. In their place came Russian specialists and then also aid from Poland, Czechoslovaks and Bulgarians. In the face of a popular need and the scarcity of Mongolian workers, there was a sustained immigration, especially Russian immigration, which also greatly influenced culture. In fact, the Cyrillic alphabet was introduced and all western notions as well as Japanese and Chinese were excluded.

During the cultural revolution many Russian agents violently attacked Ulan Bator and China did not miss the opportunity to try to awaken nationalist sentiments in the country, which prevented the total and tyrannical presence of the Soviet Union.
In June 1973 the agreements were renewed, both with Czechoslovakia and with Bulgaria and, therefore, Mongolia remained firmly tied to Soviet politics.

A year later Ju Tsedenbal assumed the office of President of the Presidium of Parliament.

In the period 14-18 June 1976 he was confirmed as the first secretary of the Revolutionary Party of the Mongolian People and the VI five-year plan 1976-80 was also approved.

A year after the elections they decreed victory for this party’s government. In the late 1970s, the controversy with China was intensified, as was cooperation with the Soviet Union.

In May 1981 at the 18th Party Congress held in Ulan Bator, Gorbachev represented his country and all agreements with the Soviet Union were reiterated, including the re-election of the first secretary. But on 23 August 1984 he was removed from office because he was elderly and in poor health. And with the expressed gratitude of the whole country for his constant work, Z. Batmonkh was elected successor.

As politics changed within the Soviet Union with the advent of Gorbachev, then with détente, relations between Mongolia and the People’s Republic of China also began to improve. And in fact on 9 August 1986 a consular treaty was signed between the two countries.

In the same year the 19th Party Congress was held; the first secretary was confirmed and the decision was made to reduce state bureaucracy; so that 8 ministries deemed obsolete were abolished and 5 new ones were created.

Between 1989 and 1990 new political organizations arose which prompted substantial reforms. The most important of these was the Mongolian Democratic Union, headed by S, Dzorig. In May 1990 the Great Khural of the people passed a law for the legalization of new parties. In September the first president of the country was elected, who was P. Ocirbat. In November 1991 he was elected president of the Grand Khural Z. Urtnasan.

The official name of the country in 1992 changed and from Mongolian People’s Republic it was simply called Mongolia. Party President was elected B. Das-Yondon.

With the birth of other political parties, in Mongolia the leading role in the country by the Revolutionary Party ceased, which however maintained dominance in the government.

In fact, he held the Parliament with 70 seats out of 76, even though the oppositions still had a good affirmation.
The oppositions called for political-social-economic reforms and also the Head of State, P. Ocirbat, shared these aspirations which, however, did not find consenting P. Jasray, a member of the Revolutionary Party.

He also stood in the presidential election of 1993 but was clearly beaten by Ocirbat. Then the main opposition parties coalesced and all together won the policies of June 1996.

The newly formed government, chaired by M. Enhsayhan, immediately began the reforms and first cut public spending, abolished customs duties and during 1997 started privatizations. But the liberalization of energy prices led to a sharp rise in inflation and a sharp deterioration in the living conditions of the people.

All this was fatal on the occasion of the presidential elections in May 1997, where 60.8% of the votes were assigned to N. Bagabandi, candidate of the Revolutionary Party. 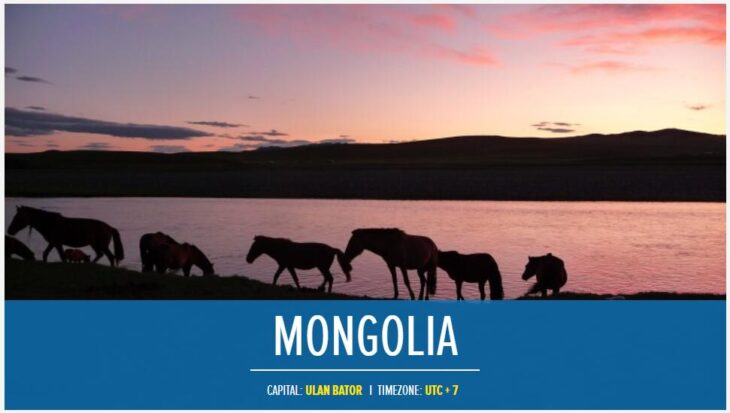 From April to July 1998, two other prime ministers took turns in government after the resignation of Enhsayhan, the first of which was T. Elbegdory, candidate of the National Democratic Party. Only in December 1998 was it possible to overcome this period of emptiness, that is when the President of the Republic, who had already rejected some others, finally accepted candidate J. Narantsatsralt.

But in July 1999 he resigned and was succeeded by the Foreign Minister, R. Amarjargal.
In foreign policy, Mongolia remained strongly linked to Russia for having signed a twenty-year friendship and cooperation agreement since 1993. A similar pact had also been agreed since April 1994 with Popular China.

But Mongolia also strengthened international relations with Japan and the United States which, together with China, Russia, the World Bank, the International Monetary Fund and the Asian Development Bank, were members of the Assistance Group for Mongolia.